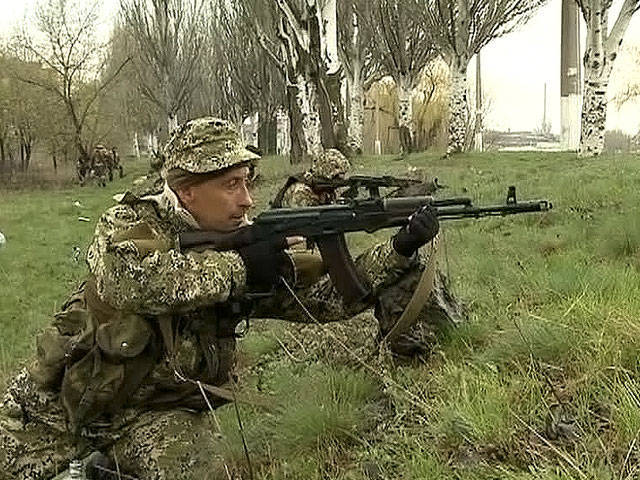 Responsibility for the outbreak of civil war and the further disintegration of Ukraine is shared by radical nationalists with the Americans. We are talking about a civil war, since special operations are carried out against groups of terrorists. If power directs weapon against their own people, it means civil war everywhere in the world.

In just one day, the small city of Slavyansk became almost the main symbol of the resistance of Donbass. The people's self-defense fighters without a single shot captured key government agencies: the police, the Security Service and, finally, the administration. The activists armed themselves, built barricades and prepared for defense.

It became clear already in the morning: the new Kiev authorities are ready to go on assault - Interior Minister Arsen Avakov appointed by the Verkhovna Rada ordered the release of captured administrative buildings. Special units of unmarked characters began to be transferred to Slavyansk, helicopters landed at an abandoned airfield near the city, unloaded special forces soldiers. Eight armored vehicles blocked the entrance to the settlement from the side of Smolenskoye village. Meanwhile, the people's self-defense fighters took up positions in the city, the whole of Slavyansk was under the control of armed activists. The detachments prepared for a possible assault.

Waited for the start of the assault is not long. In the morning, the special forces unit on orders from Kiev attempted to advance to the center of Slavyansk, but was stopped by the advanced guard of the Donbass people's guard. A battle ensued, as a result of which one SBU officer was killed, another five were injured. The special forces retreated under the cover of armored vehicles, the self-defense fighters also moved closer to the positions of self-defense.

After this battle, both sides began regrouping, but unknown armed men appeared in the city in the form used by the militants of the Right Sector. One of them, according to eyewitnesses, died during a shootout.

After they started shooting already in the city. One of the taxi drivers miraculously survived. His car at close range from a machine gun was shot by unknown masked men straight from a passing car. Two more cars that came under fire. As a result, one driver died. Self-defense activists believe that the militants of the Right Sector did it.

But neither the shooting nor the statements of the leader of the radicals of the locals did not frighten. Near the buildings captured by the self-defense fighters there are rallies, over administrative institutions there are flags of the Donetsk Republic proclaimed not so long ago and Russian tricolors. The requirements do not differ from those that have been heard for several weeks already in the squares of large cities in the east of the country: a referendum on the status of the region, federalization, or entry into Russia.

“Why do we have to build these locks, this defense, put armed people? In order to be heard? Is it really impossible to hear us for a month? And now it is not clear what will happen next,” said Nina Ivanovskaya, a resident of Slavyansk.

The time of passive protest is over, activists say, now the initiative is on the side of the dissenters.

In Kramatorsk during the assault on the building of the Ministry of Internal Affairs shots are heard. And here the administrative buildings are now also under the control of supporters of the referendum.

In Yenakiyevo City Hall seized. And everywhere activists say: they are not afraid of assaults, they are now ready to fight for their beliefs.

Ctrl Enter
Noticed oshЫbku Highlight text and press. Ctrl + Enter
We are
Review of special operation in Khasavyurt 5 May 2014The situation in the south-east of Ukraine. Chronicle of events. 3 May
Military Reviewin Yandex News
Military Reviewin Google News
118 comments
Information
Dear reader, to leave comments on the publication, you must sign in.