April 14 2014
15
Currently in small arms weapons A relatively small number of automation systems are used. Using various technologies and innovations, these systems allow you to create new weapons with acceptable characteristics. Nevertheless, regularly there are proposals that, according to the idea of ​​their authors, should lead to the emergence of even more advanced weapons systems. Various methods are offered for increasing the rate of fire, improving accuracy and accuracy of fire, as well as increasing the power of ammunition. In the middle of the last decade, another proposal appeared, the author of which was the inventor P. Cherkashin. The original weapon automation system authored by Cherkashin is designed to solve several existing problems.


The main idea of ​​the invention of P. Cherkashin is to create a weapon system using a gas engine having a barrel without any vent holes. Such a design of the barrel, in which the discharge of gases to the piston is made after the bullet passes a muzzle, should improve some characteristics of small arms. The main effect of this innovation is an increase in the initial velocity of the bullet in comparison with a barrel of the same length, equipped with a vapor system of the “traditional” design. The consequence of this should be a greater firing range and higher performance when using armor-piercing bullets. 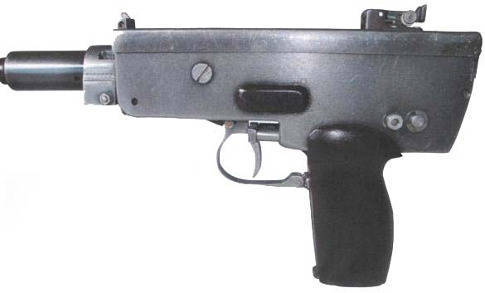 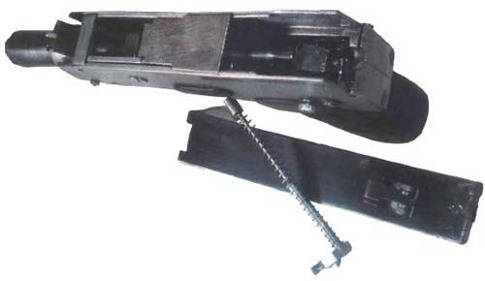 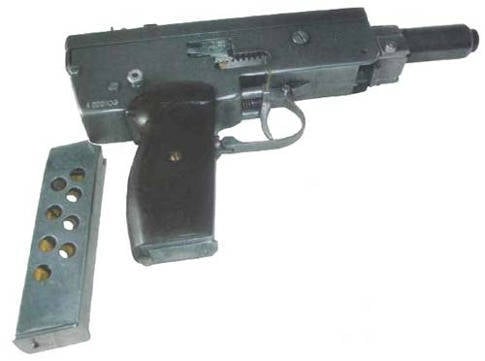 As is clear from the drawings attached to the patent for a new gas automatics (patent No. XXUMX of the Eurasian Patent Organization), some of the elements of the gas engine are located outside of the receiver. The muzzle of the barrel of the weapon protrudes from the receiver and is covered with a movable muzzle acting as a gas tube and piston. On the muzzle of the barrel there is a washer with a seal that fills the space between the barrel and the muzzle. In front of the muzzle there is a small tube with an inner diameter slightly larger than the caliber of the bullet. At the rear of the muzzle is a mount for thrust-slide, extending into the receiver.

Part of the slide, located inside the receiver, it is proposed to perform in the form of a rack. The slider teeth are associated with the gear, the upper part of which, in turn, in the same way should interact with another slider located in the upper part of the receiver. The back of the upper slide is rigidly connected to the bolt carrier and completes the transfer of gas energy to the weapon’s bolt. At the rear, the slide slide is in contact with the return spring. Such a “reciprocating mechanism” in combination with the original muzzle is the basis of the new automatic gas construction of Cherkashin.

When firing, the barrel of the original weapon should be locked using two symmetric swinging larvae. The latter must stand on the special stops of the receiver. The bolt carrier with bolt should move on the grooves of the receiver. The bolt of the weapon interacts with the trigger type trigger. The proposed in the patent design of the weapon allows you to fire both single shots and bursts. The fire interpreter may be located above the pistol grip. It is possible to use an automatic fuse.

device of the reciprocating mechanism using a cable

The principle of operation of gas automatics P. Cherkashin is as follows. When fired, the powder gases push the bullet out of the barrel. Until the bullet leaves the barrel, there is no pressure reduction due to the removal of gases into the gas engine. Coming out of the barrel, the powder gases fall into the space between the front of the muzzle and the washer on the barrel. Continuing to expand, the powder gases push the muzzle forward. The muzzle interacts with its slide-slider and, through two rack and pinion gears, sends part of the energy of the gases to the upper slider, which is located in the receiver. Under the action of the upper slider slide frame reduces swinging larvae and releases the shutter. Moving back, the bolt removes the cartridge case, and also cocks the trigger and prepares the weapon for a new shot.

After the pressure in the muzzle drops to the required level (gases can flow freely through the front hole in the muzzle), the return spring returns the bolt carrier to its place. In addition, with the aid of a system of sliders, the muzzle is returned to its initial position. When the mechanisms return to their original position, a new cartridge is sent. Locking the bolt using two swinging larvae occurs using a special wedge on the bolt carrier.

The use of a movable muzzle and "reciprocating mechanism" provides a significant reduction in pressure loss of powder gases when the bullet moves along the bore. In addition, it is possible to use other solutions that can improve the characteristics of the weapon. As stated, in the design of advanced weapons, if necessary, a knot can be included that reduces the barrel toss when fired and thereby increases the accuracy and accuracy of fire. In this case, in the design of a submachine gun or machine gun, a system of weights and counterweight is introduced, compensating toss by its movement.

The device is an automatic using a new scheme of automation

According to the author of the project, the connection of the bolt and the muzzle can be carried out not only with the help of sliders and gears. It is proposed to apply the transmission using a cable and rollers or chain and roller. When using alternative systems, the layout of the internal weapon assemblies changes accordingly. The rollers of the cable or chain mechanism should be placed in the rear part of the receiver, behind the slide frame and other mechanisms of the weapon.

It is known that there is at least one sample of a submachine gun made using the gas automatics of P. Cherkashin. Information about the tests or their results is missing. Nevertheless, even without such information it is possible to present approximate prospects of the proposed automation system. The advantages of the proposed system include an increased initial velocity of the bullet in comparison with a weapon having a barrel of the same length and equipped with a “traditional” exhaust system. In addition, a prospective weapon compensation mechanism that enhances the accuracy and accuracy of fire can be considered an advantage of advanced weapons.

At the same time, the Cherkashin gas automation system is not without flaws, which can have the most negative effect on the operation of advanced weapons. The main one is the relatively complex construction of automation, which uses several parts and several mechanical gears. With all its advantages, such a system can be unstable to various contaminants. Dust, sand or water can impede the interaction of elements of the rack and pinion, stop mechanisms, or even make them unusable. Using other ways to connect the muzzle and bolt may increase the system’s resistance to contamination, but the rollers, cable or chain have their own drawbacks, which can also adversely affect the operation of the weapon.

The gas automatics system proposed by P. Cherkashin for small arms and small-caliber artillery is of particular interest. It allows you to significantly raise the firing characteristics of the weapon, although it is not without flaws that hinder practical use. Perhaps in the future, the Cherkashin system will be refined and improved, which will allow weapons with such an automation system to get to the test machine guns. At the same time, it cannot be excluded that the original idea remained at the stage of obtaining a patent and would not receive any further development.