And about. The head of the Ministry of Internal Affairs of Ukraine announced the beginning of the military operation in Slavyansk

April 13 2014
381
The Minister of Internal Affairs of Ukraine, appointed by the Verkhovna Rada, Arsen Avakov announced the beginning of a military operation in Slavyansk, where on the eve of the protestors were occupied by city departments of the Ministry of Internal Affairs and the Security Service of Ukraine. The actions of the security forces are led by the anti-terrorism center of the Ukrainian Security Service. 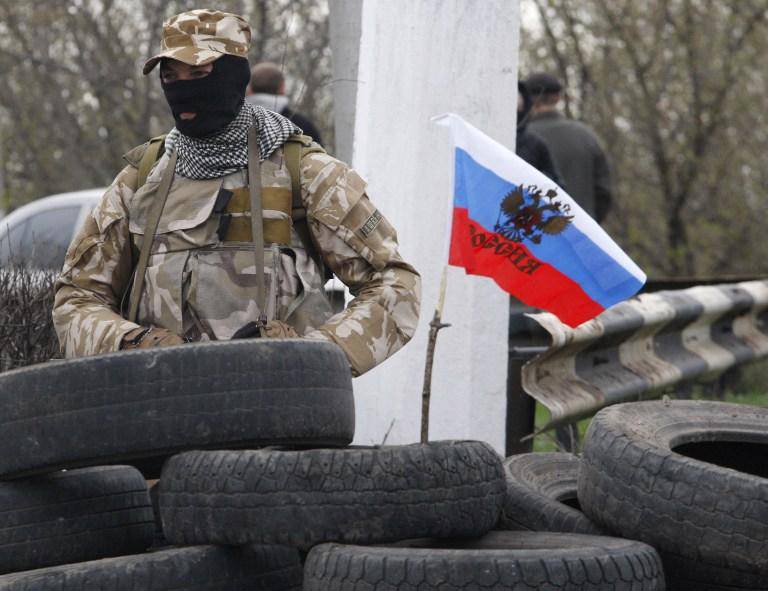 About the beginning of the military operation in the Ukrainian city of Slavyansk Avakov said on his page on Facebook. “He heads the ATC of the SBU of Ukraine. Forces from all power departments of the country are attracted, ”he wrote this morning.

Recall, April 12 supporters of federalization Ukraine took control of the building in the city of Slavyansk, Donetsk region. The head of the Donbas people's militia, Sergei Tsyplakov, said that the activists had entered the city council buildings, and all this had happened without the use of any weapons.

"Now in Donetsk we will block the base of the" Golden Eagle "so that they do not go to Slavyansk to liberate these buildings," he added.

According to eyewitnesses in the city heard shooting.

At the same time, Arsen Avakov in his Facebook urged all residents of Slavyansk to leave the city center - not to leave the apartments and not to go to the windows.

At the airport of Kramatorsk 50 landed more than alpha fighters. The barricades urgently need people! # Slavyansk

In Slavyansk, there is already a wounded 1 - being taken to hospital # Donetsk # Maidan # Slavyansk # Slavyansk #Southeast #russianspring #ZELLDONETSK #KRAMATORSK

People close the windows with trees and pillows, there is no one on the street, # Slavyansk

Later it became known that activists organized checkpoints at the entrances to Slavyansk. Barriers to key roads into the city are made of mountains of tires. Next to them are people on duty who call themselves the “People’s Militia of Donbass”. At each post is on 4-5 people. They stop all seemingly suspicious cars, tell drivers that the entrance to the city is closed, and force them to turn around.

Meanwhile, rallies for the federalization of Ukraine are held in Donetsk, Kharkov and Lugansk. They began in March and do not stop still. Reason to speak people Kiev’s intention was to repeal the law on the special status of the Russian language in these areas and change most of the governors.

In the sky over Slavic fighting helicopters

The situation in Slavyansk in the Donetsk region has become aggravated, armored vehicles are being pulled up to the city, gunfire was heard near the roadblocks, protesters claim possible casualties among the participants of the self-defense detachments, reports Russia 24 channel.

According to him, from the side of Kharkov to Slavyansk armored vehicles were pulled. According to eyewitnesses, shooting was heard near the checkpoints of self-defense detachments, located at the entrances to Slavyansk. Protesters reported that among the participants of the self-defense units there are victims, but this is still unverified information.

According to the TV channel, thick, black smoke rises over the city - tires that are stacked near the barricades are burning.

Two combat helicopters patrol the sky over Slavyansk. Every five minutes they fly at a low altitude above the district center. At the entrance to the city, people in camouflage uniforms check cars. Near one of the posts, on Karl Marx Street, Russian tricolors, the flags of the Donetsk People’s Republic and the Donbass militia flutter over the barricades. 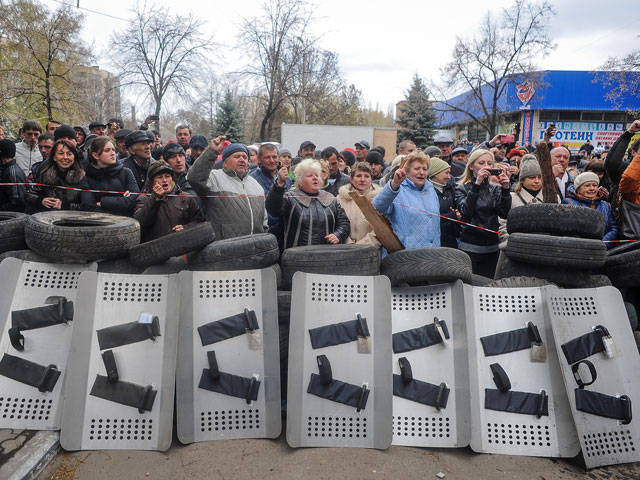 There are roadblocks in the city itself. People in camouflage uniforms, armed with machine guns, selectively check passing vehicles.

According to recent reports Ukrainian officers unblocked one of the checkpoints. 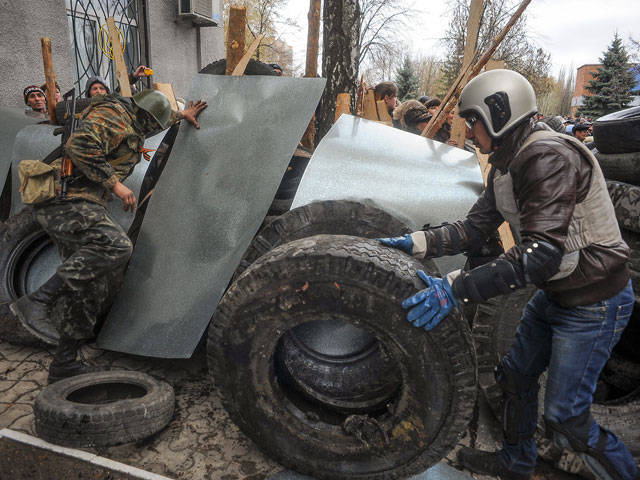 All suburban bus flights in Slavyansk canceled due to the overlapping of entrances to the city. This was reported in the control room of the local bus station. "Our buses are at the bus station, we wrapped them back, because all the entrances and exits from the city are blocked," said the source. ITAR-TASS. When the transport message resumes, it is still unknown.