On Saturday, reports about the seizure of administrative buildings or police stations came on Saturday from a number of settlements in the Donetsk region. In Kramatorsk struck up skirmish between unknown persons who attacked the police department and law enforcement officers, as a result of which one person was injured. Anxiety added messages about roadblocks and "green men", uniforms and weapons reminiscent of the "self-defense units of the Crimea." The activity of the "self-defense detachments", we recall, made possible a swift referendum, following which Crimea became part of Russia. And about. President Oleksandr Turchinov announced the convening of an emergency meeting of the National Security Council in connection with what is happening in the Donetsk region.

The first reports of the seizure of the city police department came in the morning from Slavyansk - cities with 120-thousand population in the north of the region. On published video one can see how a well-organized group of people, hiding behind the facade and porch, waits until the bars on the window throw up the cable with the cable, and then get inside the building.

The unusual support for the event was added by the full support of the mayor of the city. After the city police department, the detachment moved to the city administration building and took it under control. Mayor Nelia Shtepa stated that there is no extremism in the situation, she met with the invaders in the mayor’s office: “I know many people, they are our people, and they put forward demands for a referendum. We all agree, I cannot contradict them.” Ukrainian Interior Ministry reported that the invaders handed out to protesters weaponfound at the police station.

From the head of the Ministry of Internal Affairs Avakov, who promised in the morning Facebook tough to respond to the actions of armed "terrorists", there was no news until late at night. Local media reported that buses with special forces sent to Slavyansk did not reach the city: they were either blocked by local residents, or Donetsk security officials refused to disperse the rally themselves.

Later in the afternoon, armed men seized the city police department in another settlement of the region - Krasny Liman.

The third building captured in Slavyansk was the office of the Security Service of Ukraine. Following this, the. President of Ukraine Alexander Turchinov dismissed the head of the Security Service of the Donetsk region. And the head of the police area resigned under pressure from protesters and fled from the surrounded building of the regional cupola. It is reported that the former fighters of the "Berkut" refused to obstruct the demonstrators and pinned St. George ribbons.

"Ukrainian Truth" reported that the flag was changed to the administration of another city in the region - Kramatorsk. There, law enforcement officers also tied St. George's ribbons to their uniforms, and a couple of activists were let into the building, and they hung a black, blue and red "Donetsk Republic" flag over the building. An initiative group of activists on the question of what St. George ribbons mean, announced that this is "a manifestation of patriotism."

Those gathered in the square greeted the flag with applause and, reportedly, began to disperse.

In the city of Gorlovka, Donetsk region, the police managed to repel an attack on the city administration building of the Ministry of Internal Affairs, reports UNN. According to the press service of the department, "around 20.00, several vehicles arrived at the administrative building of the State University, from which unknown people came out and headed towards the building, intending to get inside." “The penetration attempt was discontinued. Probably, the main purpose of such actions was an attempt to seize weapons, which at the moment are not found either in the administration building or in the buildings of the three police departments,” the Gorlovsky Department of the Ministry of Internal Affairs suggested.

Toward evening, the head of the Interior Ministry still commented on what is happening in the Donetsk region. On Avakov's page in Facebook[/at] there was a message about the attack on the police department in Kramatorsk. As the head of the Ministry of Internal Affairs noted, unknown persons fired at the building, after which a shootout began between them and the police.

At least one person was injured, reported [u] "Donbass News". The attackers identified themselves as the Slavic battalion of the Donetsk People’s Republic, clarifies the publication. Video from the shootout publishes "Gromadske TV".

According to ITAR-TASS, representatives of the “People’s Militia of Donbass” occupied the building of the Kramatorsk city department of the GUMVS of the Donetsk region. An order of 50 armed men entered the building, several shots rang out. According to eyewitnesses, no one was hurt, no one applied to local hospitals.

Volunteers occupied the building within minutes. Soon all the police officers left him without weapons, Pavel Volovoi, one of the commanders of the People’s Militia of Donbass, told the agency. “We oppose the bloody junta, who shot at its people in Kiev. We cannot obey people who have shed the blood of their people, which has led the country to chaos. We are in favor of holding a fair referendum,” the activist said.

A representative of the people's militia categorically denied that volunteers, veterans of Afghanistan, stood up to defend the police building in Kramatorsk. “There was no assault as such. After a minor skirmish, the police left the building without a weapon,” Volovoy said.

A spontaneous rally continues in front of the Kramatorsk department of the GUMVS. Gathered chant: "No bloody junta!" Three Kramatorsk police officers remain in the building, and the national militia command is negotiating with them. Barricades are erected in front of the entrance and along the perimeter, the militiamen are preparing for a possible assault.

The minister also described the situation in Krasny Liman, where police forces and city warriors repulsed "an attack by militants with short-range automatic rifles made in Russia by AK 100." Avakov stressed that "AK 100 with grenade launchers is only in service with the troops of the Russian Federation."

In addition, the head of the Ministry of Internal Affairs of Ukraine recalled that cell phone towers were destroyed in Slavyansk, the regional police department and the local branch of the SBU were blocked.

According to Avakov, “the Ukrainian authorities regard the facts of today as a manifestation of external aggression on the part of the Russian Federation.” "Urgently convened by the National Security and Defense Council of Ukraine. The groups of forces of the Ministry of Internal Affairs and the Ministry of Defense of Ukraine carry out an operational response plan," the minister concluded.

Donetsk edition "Isle" with reference to the correspondent reported on the roadblock at the entrance to Slavyansk.

In social networks, they noticed that the camouflage and weapons of these people are very similar to the equipment and weapons of the "green men" who were in the Crimea during the preparations for the referendum. "Belarusian partisan" even published two photos of a man in military uniform and a closed face, claiming that one was made in the Crimea, and the other in Slavyansk. It can be seen that the people in the photo have the same weaponry, unloading and in a similar way slid onto the right side of the balaclava.

Reuters with reference to eyewitnesses, reports on two roadblocks near Slavyansk, where people "stop, partially in military, partly in civilian" clothes, for inspection. Posts are exposed on the roads leading to Donetsk and Lugansk. The Russian tricolor flies over one of them, the flag of the "Donetsk Republic" flies over the other.

Journalist Ekaterina Sergatskovawho worked in the Crimea during the referendum and watched the seizure in Slavyansk, is sure that “the police department was seized, apparently by the guys from the“ Crimean army. ”According to her, they themselves say that“ from the Moscow region, but have long lived in Crimea".

Armed people attacked the Donetsk Chemical Plant in the afternoon

In addition to attacks on administrative buildings, 12 of April around 15: 00 local time, a group of armed men attacked the Donetsk Chemical Plant, which is under the protection of the National Guard of Ukraine, reports UNN, citing information from the press service of the Ukrainian Ministry of Internal Affairs. Law enforcement officers placed the attackers to get to the company, where explosive substances are stored.

As a result, one of the law enforcement officers was injured, and two attackers were detained. "Thanks to the decisive and professional actions of the police, two of the attackers were detained, their weapons were confiscated. One of the law enforcement officers received moderate bodily injuries. The security of the object, which stores a significant amount of explosive substances, is strengthened," the press service stressed.

"Shoot" or at least respond

The deputy Rada, known for his harsh statements, and one of the presidential candidates, Oleg Lyashko, cursed the mayor of Slavyansk and threatened with execution.

Until this day, Shtepa was known to the masses for the fact that called the journalist "bitch" for a bad question.

The reaction of the favorite of the presidential race Petro Poroshenko to what was happening was much more restrained: he accused the authorities of inaction and demanded an urgent meeting of the National Security Council (NSDC).

The NSDC meeting was scheduled for 22: 00 Moscow time. It discussed the possibility of introducing a state of emergency in eastern Ukraine, ITAR-TASS reports, citing a message from local television. According to unofficial data, the meeting was attended by the governors of the eastern regions of the country.

The border service is preparing to fight back

State Border Service urged residents of border areas to refrain from blocking border units and obstructing law enforcement agencies. The State Border Service of Ukraine reports about its readiness for decisive actions in the case of provocations at the state border.

“When organizing illegal measures or attempting to unlawfully seize subdivisions and office premises of the department, the State Border Service is forced to take comprehensive measures to ensure the inviolability of the state border of Ukraine, protect personnel and family members of military personnel, preserve property and other material assets. The Office will act exclusively within the framework of the current legislation of Ukraine and in accordance with the statutes of the Armed Forces of Ukraine ", - stated in the department.

The State Border Service also noted the “inadmissibility of provocations at the state border” and called on all citizens to refrain from rash actions and illegal actions. 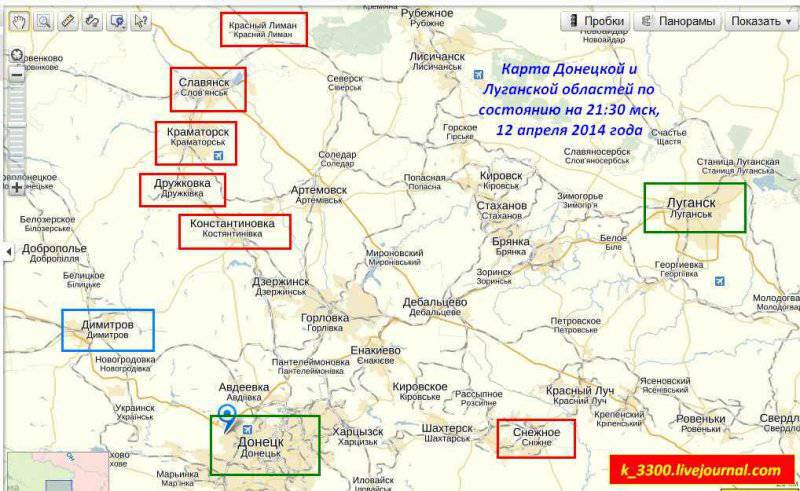 On the map, green shows cities, held by residents for several days, red - cities. in which citizens today occupied the police department and city councils / district administrations. In Dimitrov, the relay center and the "Party of Regions" office have been burned today.