Cosmos is waiting for new heroes 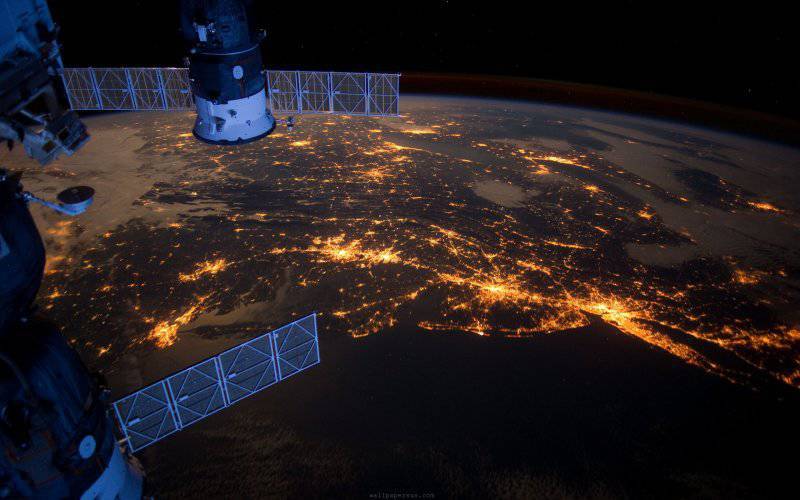 Dawn. We still do not know anything.

The usual "breaking news" ...
And he already flies through the constellations,
The earth will wake up with its name.
- K. Simonov

The silence of infinite spaces - and the entire 20 years of the cosmic dream.

The “space race” that unfolded between the USSR and the USA was the cornerstone in the development of civilization. Starting to the stars demanded the appearance of the most sophisticated and perfect technique ever created by human hands. For the first time ever history people managed to see the reverse side of the moon. Seeing other worlds close by - mysterious, bizarre, sometimes scary, but still fantastically beautiful landscapes of Venus and Mars ... Today, these poor-quality black and white images inspire a mystical thrill - here each pixel is formed by radio waves flying through millions of kilometers of outer space.

Yet the main achievement was different. Looking into the eyes of infinity, humanity realized the paramount importance of non-pragmatic research. The terrifying scale of the universe and the true meaning of man in this world have become clear. 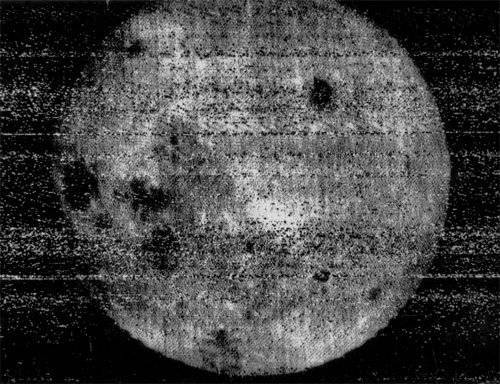 The first image of the far side of the moon, transmitted by the Soviet interplanetary station "Luna-3", 1959.
In fact, the ambitious space programs of that era had no practical meaning. The presence of people in orbit was limited to gymnastic stunts in zero gravity and records in the logbook about the number of eaten tubes of space food. All serious work was done by automata - meteorological and reconnaissance satellites, communication satellites, space observatories and orbital interceptors. For the placement in space of military and scientific equipment it was not necessary to create habitable spacecraft with a complex and cumbersome life support system.

The astronauts were sent to low earth orbit, partly because of interest, partly because of the intrinsic human vanity. With a firm belief that someday the collected data will be useful when planning long-range space missions - to the Moon, Venus, Mars. Somewhere in the asteroid belt - to the outskirts of the solar system. And again there was a question for which there was no concrete answer. Why risk people in such missions, where even the presence of automatic probes is doubtful? 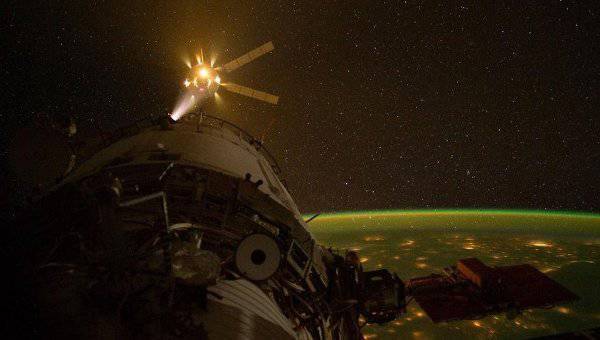 There is a touch! There is a mechanical grip!
Docking in Earth orbit
Unlike spy satellites, automatic interplanetary stations went into a black void, taking with them hundreds of millions of Soviet rubles and US dollars. At the same time without any specific returns. On unacceptable conditions on the surface of other celestial bodies has been known for a long time. Subsequently, the calculations were confirmed by ground-based spectrographs and radio telescopes. Not a single planet has been detected, except Earth, where water could exist in a liquid state. Not a single celestial body with an atmosphere that resembles anything on earth at all. Then what is the meaning of flying into these dead worlds? 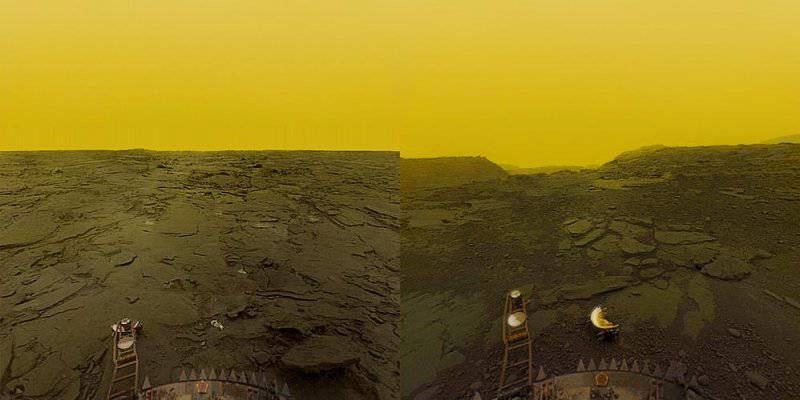 Panorama of Venus transmitted by the descent vehicle "Venus-13". Overboard temperature was + 470 ° C. Pressure - 90 terrestrial atmospheres (equivalent to the depth of immersion 900 m below sea level). The device worked in such conditions 2 hours 7 minutes.

One expedition to Mars would be enough to make sure that it is empty and sterile. Nevertheless, the USSR and the USA with infinite persistence sent automatic stations and rovers to the Red Planet with the hope of finding ... signs of water that flowed along the slopes of Martian craters half a billion years ago. Naive and funny. And not a single piece of ice has been discovered so far. It all comes down to controversial discussions around hydrogen-containing compounds on the surface of Mars.

The closest distance from Earth to Mars is 55 million kilometers. Alas, modern spacecraft are forced to fly differently - half-ellipsoid. In this case, the way to Mars is standard 260 million km. The minimum speed for reaching the departure trajectory to the Red Planet is 11,6 km / s, the travel time is 259 days.

Multi-month flights along a semi-elliptical trajectory (due to the low speeds of interplanetary probes accelerated by "chemical" LREs). Constant failures and disturbances in the operation of spacecraft, unreliable mechanics and primitive electronic equipment. Three of the four launches to Venus and Mars usually turned into a disaster. But no difficulties could stop space explorers: a series of stations, one after another, were sent annually to distant worlds. What for? No one will give a specific answer.

Cosmos was an expensive toy with no practical significance. Of course, all the achievements of astronautics were wrapped in a bright political wrapper - priority was important for the leaders of the superpowers. But in the end, the successes of the Soviet space program did not save the USSR from perestroika. And NASA's unique expeditions were forgotten and buried under the dust of history. Most of the inhabitants on both sides of the ocean only remember how the Americans broke two shuttles and flew to the moon in Hollywood pavilions. Brutal mockery of the heroes of the past. Who are interested in the "Vikings", "Pioneers" and "Voyagers"? And let them fly 40 for years: in the interstellar space is dark and nothing is visible ... 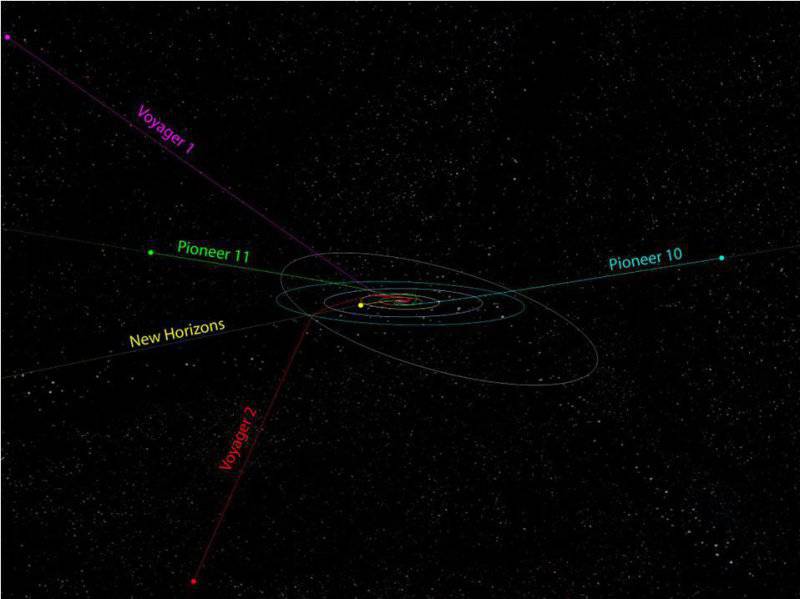 Starships go to infinity. Five spacecraft created by human hands, exceeded the third cosmic speed and went into interstellar space (or will do it soon)

Cosmic euphoria could not last forever. By the beginning of 70, the passions began to fade away. In 80-s, outraged cries were heard: “Enough! We have a lot of unsolved problems here on earth.”

The person will suffer any space travel, except, perhaps, their cost.
- L. Dubbridge

... Layouts of lunar landing modules are lonely in museums. There is no interest in the creation of super-heavy launch vehicles. Instead of bold projects of the past ("Heavy Interplanetary Ship", USSR or Saturn-Venus, USA), cautious opinions prevail, such as "Flexible Way" (flying around the Moon and exploring asteroids closest to Earth), or completely abandoning manned space flight. .

In the summer of 2011, the last launch of the Space Shuttle took place. Now the Yankees will not have their own manned spacecraft at least until the 2021 of the year (at the same time, a trial launch of the new-generation Orion 2014-ton spacecraft, Orion, is still unmanned). The situation with the financing of interplanetary expeditions is not the best: in the coming years, NASA was left without a "flagship program", all efforts are focused on completing the Webb orbital telescope, which cannot be completed for the tenth year (estimated launch date is 25).

Roscosmos is also going through hard times. The long-term collapse, whose natural consequence was the epic with Phobos-Grunt and numerous accidents during rocket launches, all this did not add to the popularity of space programs. Call "Forward, in space!" now perceived as a mockery.

On the other hand, there is no reason for discontent. The current situation has its own objective reasons. The need for human presence in space is not obvious. Automatic interplanetary missions are expensive and doubtful (not to mention manned!) Any talk about the industrial development of celestial bodies is meaningless as long as the payload is less than 1% of the launch mass of the rocket-space system.

The President of Uganda proposed to implement the African project on the moon. Speaking to leading lawyers in the country, Yoweri Museveni said that Americans and Russians had already sent expeditions to the Moon, China and India would soon do it. And only Africans, according to the Ugandan leader, remain in place. Africans should know what the representatives of developed countries do on the moon.
— News France-Presse Agency, 2009.

The significance of space programs temporarily decreased, but a great dream remained. After all, it is not by chance that Cosmonautics Day is one of the few truly national holidays in Russia; everyone remembers and knows it. The memory of the great feat accomplished on 12 on April 1961 went far beyond the borders of the country. The image of the smiling "cosmonaut Yuri" is recognizable everywhere. 108 minutes transformed the world, adding a sense of meaning to the entire planet. Touching infinity creates the feeling that there are things in life that are more important than what we do every day.

And, of course, the cosmos is a challenge to earth science and technology. Sooner or later astronautics will again be in the focus of modern technology. Otherwise it can not be: we are destined to go beyond the limits of our “cradle”. The study and transformation of the world on a rapidly progressing scale - probably this is the purpose of man.

Every atom of your body is a particle of an exploding star. Perhaps the atoms in your left hand formed in one star, the atoms in the right - in the other. This is the most poetic of all that I know about physics. We are all star dust. We would not be here if the stars had not exploded. The stars died so that we could be here and now.
- Lawrence Maxwell Krauss, Astrophysicist

Maybe we do not leave this world. Maybe we are going back home! 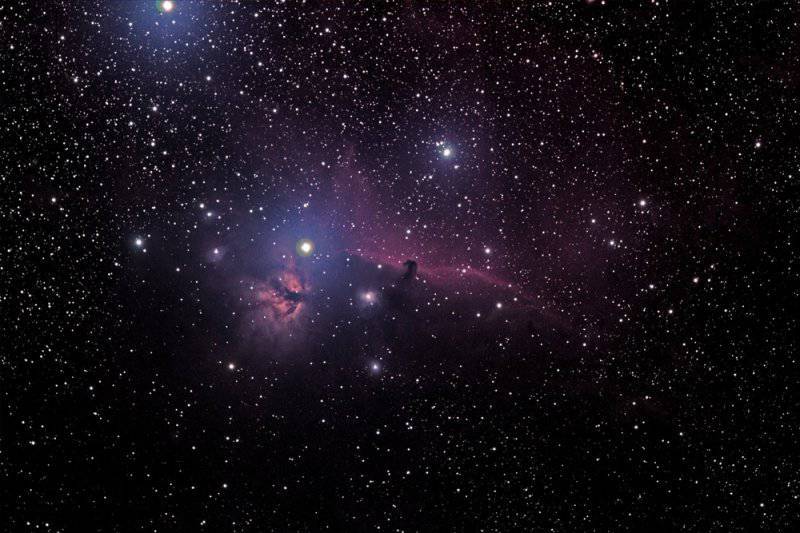 Ctrl Enter
Noticed oshЫbku Highlight text and press. Ctrl + Enter
We are
The history of the future: how humanity makes its way into spaceThe road to the stars. The crisis of modern cosmonautics
Military Reviewin Yandex News
Military Reviewin Google News
18 comments
Information
Dear reader, to leave comments on the publication, you must sign in.