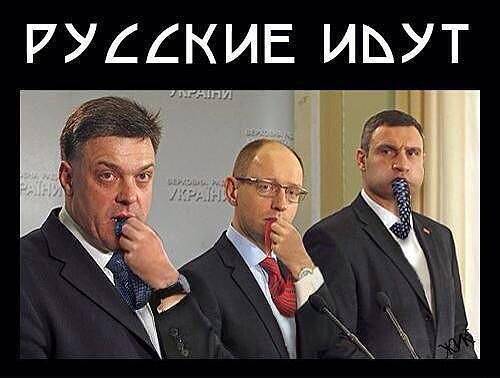 Today I will explain to you why I have the right to interfere in your affairs.

On a simple and clear example. You love the private sector and private farmstead? Well, imagine: live once a big family. On one thin day, the elder brother became seriously ill, and, taking advantage of this, the eight-cousins ​​like the be-be's brothers fenced off their plots. And you, too, shamelessly tidied up a tiny little garage, where the old "Constipation" of the older brother was standing, which you did not build and which you never owned.

The elder somehow recovered and found that now the best pieces are cut off, and all the debts of a large family lie on him. What to do - he began to pay, plow up the rest of the land, in which there is no black soil, and impassable jungle under the foul cold to hell. It was all sorts of things: thieves were running in, traitors were deceiving, bad things were being opened, but somehow it was still being built.

And the cunning eight-cousin as a relative, a spirited person, brightly original and cheerful, rested on his laurels. He did not need to open up the taiga and master the north, it was not necessary to lay out beautiful paths - everything was already there. He even was too lazy to buy a ruzhbayk. He sold the old bottle rifle for a bottle. Lafa.

Especially because the oldest, like the last idiot, 23 of the year allowed her neighbor to feed on electricity from his shield. You sometimes paid, often did not pay at all ... The elder for some reason supported you, buying fake cheese, candy from oil, crap pipelines of gas pipelines and a terrible kind of yellow fat, which no decent person will eat, since now there is a supermarket in every town with delicacies from around the world. However, supported. He was spending personal money, constantly and in hellish volumes that went away, as if through a breakthrough.

Over time, a separated neighbor, in real life, who had long ceased to be a relative, was completely ohame, starting to blame for his endless hard drinking, throwing studies and work of an older one. He himself did not work, he did not try to live for a year on pure cost accounting. Well, to self-check. Shouted from behind a fence about "Gilyak". However, I did not take the wire cutters and did not cut off the electric wire from your shield. So he continued to borrow money endlessly without giving back, popped his carto, which you don't need, sometimes promised friendship.

The real brothers-sisters and numerous children all these 23 years were completely out. Why does Papa feed his neighbor's 23, but not feed us? Why does he spend that kind of money?

On the very same 200 with more than billion dollars spent on you?

I very much doubt that Ukrainian farm desire ... I would not you. I would kill for greed, but I wouldn't.

And we have become. Why?

... When Ilf and Petrov traveled to America in 30's, they fastened themselves all the way: they did not drink Coca-Cola. But at the end of the road they did not stand it and tried it. Delicious, bitch, the writers confessed. And then they explained: how could we say otherwise, if every hundred meters of the way we were convinced by the billboards?

... It took me a lot of time to fool me that we were brothers. And therefore it is necessary to help.

And I believed the billboards, naturally zombied, do you believe?

The whole country was zombie on this fraternity.

And only now he wakes up from a bad dream. Do you think one of you has grown a new, bright generation of supercrowns, not remembering the relationship? My children start asking questions about Ukraine. And there are no more billboards. Removed. I report: you absolutely need it. As Romanians, for example. And when these children begin to lead the country (they are already starting) - you are lured to pay. Your great-grandchildren will owe to my great-grandchildren. Because instead of fraternity, we got “moskalyaku to gilyaka”.

Say, why feed such a neighbor?

And now about myself specifically.

Tell me, peanut, why in Russia still a third of roads do not have a hard surface? Why is there no fiber optic and motorway in Norilsk, as in Alaska or Norway? Because there is no money. Optical fiber costs 3 million dollars. They are not. On you, kakapuz, there is, but on me - no. I live in the donor region. There are many tasty palladium, platinum, copper and nickel. The northernmost techno policy, giving 2% of the country's GDP (not counting the oil industry), does not have a road or railroad. It has a dead runway, on which it’s scary to sit down, every time you pray - you would stay alive ...

And what would we have to spend these 200 more than Lard over the years in the country? Yes, you are right, some of them would be stolen, but what do you care? You, neighbor, watch your hands, they have passion like playful ones.

We already know how much it costs to build an absolutely new city with the most modern, and with the most complicated infrastructure. 50 billion with a cut. That is, instead of spending on you, the dancer, you could build five modern cities! Hundreds and thousands of kilometers of roads. Factories and factories, homes and schools.

None of this is done - pat your tummy, you eat well.

Moreover, even now, when you stupidly hate us without hiding, the electric current from my shield for some reason continues to run towards you to the site. And you will not pay again, I know.

Be a man - increase the fence! Cut off all the pipes and wires, right now, block your personal valve on the thin gas pipe in the kitchen, stop popping us with your goods and buying ours, stop going to us for a farm laborer. Have pride! We can handle, I promise, we will deal with supplies without you. Prove to the eldest, what a fierce hard worker you are and generally a European. Give an example. Worldwide.

Heal yourself, huh? Beg. But you are afraid again.

And, yes - will have to pay. You yourself can calculate how much one Ukrainian owes one Russian.

And the neighbor is still jumping! He eats your resource, shows the figs together of the return of the debt, bears from the screens nonsense about executions and nuclear weapon, for some reason, I drove a rusty tractor to my site and, drunk as it was, had been demolishing my buildings ... I was crazy.

That's what you think, the Main Provider-breadwinner has the right to go to him for once on the site and to teach the neighbor a dragon for the purpose of education, or not? Does he have the right to hand him over to an insane asylum, drug treatment, put him in debt or stupidly make a dummy to return something before his own descendants get daddy's face for bad perennial costs?

I think it has.

Ctrl Enter
Noticed oshЫbku Highlight text and press. Ctrl + Enter
We are
About Stalin and KhrushchevWhat you didn't want to know about England
Military Reviewin Yandex News
Military Reviewin Google News
116 comments
Information
Dear reader, to leave comments on the publication, you must sign in.