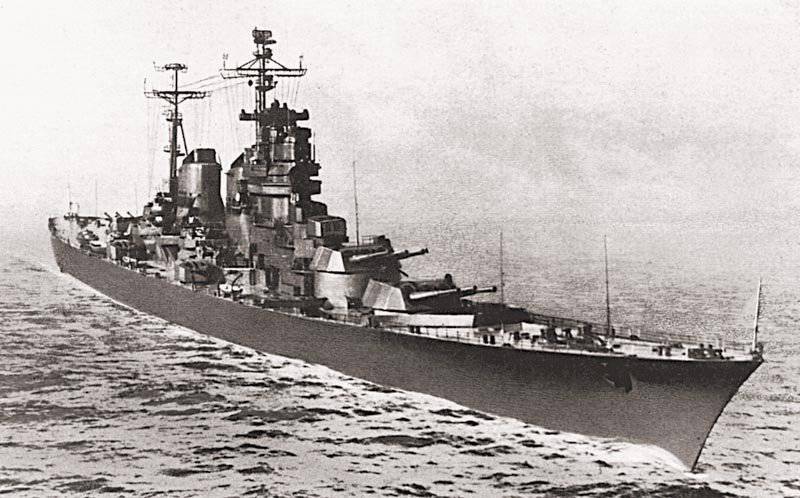 On May 15, the People's Commissar for the Navy of the USSR approved the tactical design task for the design of the heavy cruiser of the 1941 project. He was conceived as a multipurpose ship that must fight with cruisers, including heavy ones, maintain their light forces, put up active minefields, suppress coastal batteries of medium caliber, act on enemy communications. In the event of an unspecified displacement, the new cruiser should carry eight 82-mm guns, twelve 203-mm stabilized anti-aircraft guns, twelve 100-mm automata, two three-tube torpedo tubes, four reconnaissance aircraft; have a maximum speed of at least 37 knots and a cruising range of 36 miles at a speed of 10000 knots. Reservations were chosen on the basis of impenetrability of the board, the beam and the conning tower of a 20-mm projectile at a distance of more than 203 kb, and the decks - 60-kg bombs.

The very first studies of the project showed that the displacement of such a ship would be 25 tons! It is quite natural that the main caliber (000 mm) seemed insufficient for such a large ship. Further consideration of pr. 203 was interrupted by the Great Patriotic War. In 82, the development of projects for ships of various classes began, taking into account the experience of conducting military operations, including the project 1943. After specifying the tasks and clarifying the characteristics of the ship, the caliber of its main artillery was increased to 82 mm. In 220, there was another consideration of the operational-tactical assignment for Project 1947, already with the participation of the government. As a result, it was decided to arm the new ship with 82-mm artillery. It was with this main caliber that the tactical and technical assignment was approved on August 305, 31. It was necessary to build the same Project 1948 cruiser (see details >>>), but only at a new quality level.

31 December 1951 in Nikolaev laid the lead ship of the Stalingrad series, in September 1952 in Leningrad the Moscow, and a month later in Molotovsk (now Severodvinsk) the third ship. The descent of the lead ship was scheduled for the November holidays of 1953, but in April, due to the death of I. V. Stalin, all work on the 82 cruisers was stopped, and then they were dismantled at the stocks. True, the citadel of "Stalingrad" in 1954 was lowered into the water to conduct field tests of the durability of the structure and new models weapons. In 1956 – 1957 the compartment was hit by cruise missiles, aerial bombs, torpedoes and remained afloat, although, naturally, no struggle for survivability was conducted on it (!). But this did not prevent him from concluding that with the advent of cruise missiles, the traditional scheme of constructive protection is unpromising. 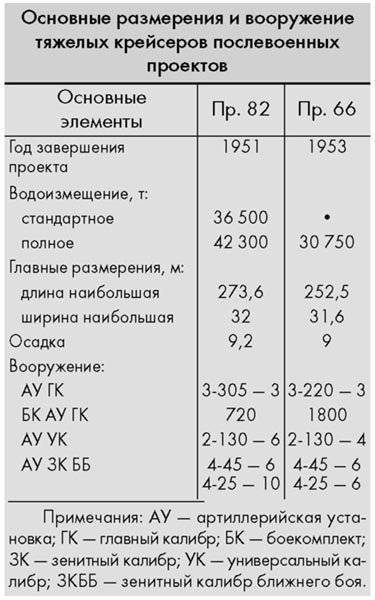 According to the approved project, cruisers of the Stalingrad type had to have three SM-31 turrets with three 305 mm guns with a barrel length of 61 caliber as the main caliber. These towers (like the guns themselves) had a large mass compared to the towers of the MK-15 cruisers of the Kronstadt type with 305 mm B-50 guns. The projectile of the new gun was 4 kg lighter, but at an initial speed of 950 m / s it was thrown at a distance of 290 kb, which is 30 kb more than the B-50 guns. At the same time, at a distance of 150 kb, the new gun pierced horizontal armor 312 mm thick (B-50 - 280 mm), and horizontal 73 mm thick (B-50 - 88). It is clear that such firing ranges should be provided with firing control devices and sources of detection and target designation. On this, the advantages of "Stalingrad" (in relation to "Kronstadt") end: shipborne detection equipment, and even more so fire control of that time, could not provide firing at distances of more than 135 kb, and aviation armament on cruiser pr.82 was not provided *. In addition, at distances of more than 200 kb, the natural dispersion of shells is very large. So, for getting one shell into the cruiser at a distance of 210 kb, about 125 shells would be needed (the ammunition on the ship is 720 shells), at a distance of 120 kb it would be about 13, while about 20 hits are needed to disable an enemy cruiser.

* It can be assumed that if these ships entered into service, they would be one of the first to get helicopters into service, which could solve the problem of detecting and adjusting fire beyond the visible horizon. 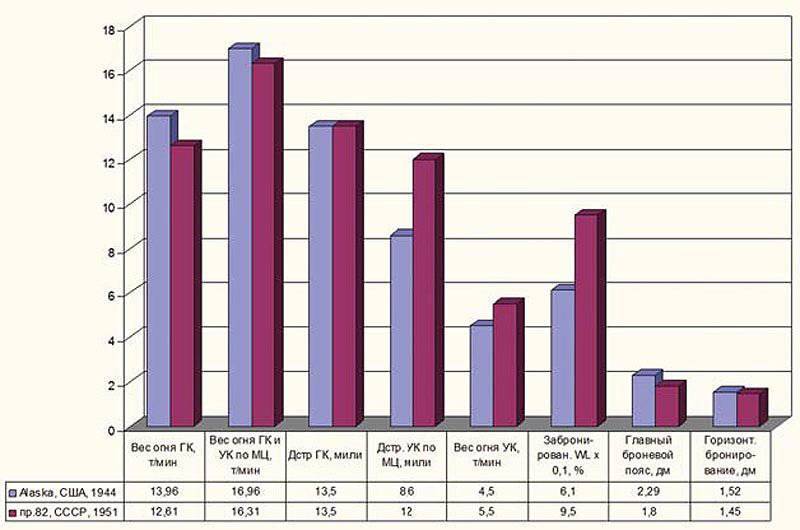 The offensive capabilities of the heavy cruiser 82 Ave. in comparison with the US Navy cruiser "Alaska"

Such large distances are usually realized when shooting at coastal areal targets. With regard to sea targets, the ability to further throw a projectile only characterizes the best ballistics of the gun, which at equal distances, other things being equal, would provide a greater likelihood of a projectile hit the target, that is, at a selected combat distance, the cruiser 82 will quickly reach the required number of hits.

Thus, it can be assumed that with the entry into service of heavy ships of the “Stalingrad” type, the Soviet Navy would have received a powerful, fairly well-balanced artillery ship, completely “competitive” to the American large cruiser Alaska. It should be noted, and the best security "Stalingrad." Although the rest of the ships would have been almost equivalent (the speed advantage of the Soviet cruiser on the 3 bonds, as the experience of the war showed, would not have significant significance).

But it is unlikely that "Stalingrad" would have found application "by specialty" in the military actions of the first half of the 1950-s. By the time of its entry into service, “Alaska” was already in reserve, from where it went for cutting.

Even before the decision on arming the ships of Project 82 305-mm artillery was approved, the question arose again about the need to create a cruiser easier and cheaper than the future Stalingrad. After all, the latter was supposed to be used independently or as a flagship of the main forces fleet at sea, but a mass ship was needed to give combat stability to various naval forces in the sea from possible attacks by light and heavy enemy cruisers. In practice, it was a question of an analogue of one of the intermediate versions of the project cruisers pr.82 with 220-mm artillery, the development of which was carried out as far back as 1945. 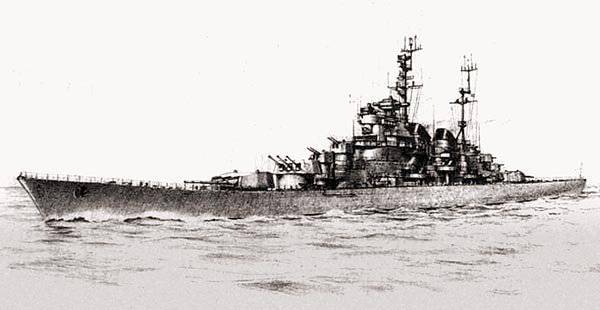 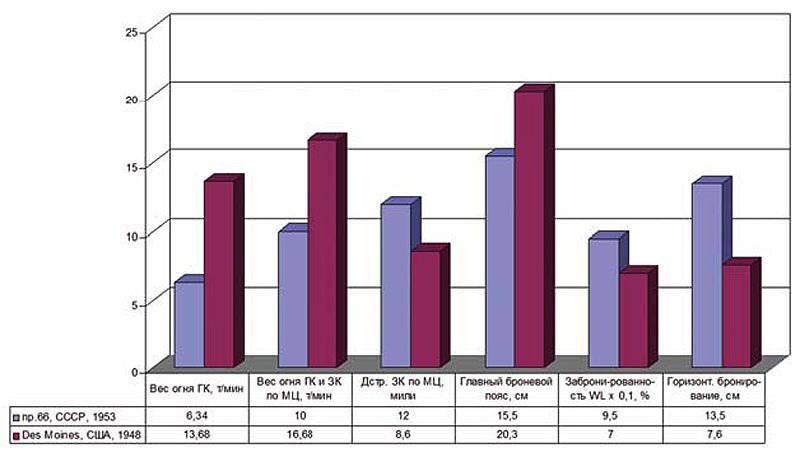 The pre-sketch design of such a cruiser LKR-22 (light cruiser with 220-mm artillery) provided for the creation of a ship that, with a full displacement of 23 500 t, had to carry nine 220-mm guns, to have a main armor belt 90 mm thick, to develop the 35 knots. But the removal of NN Kuznetsov, the People's Commissar of the Navy (the initiator of the creation of such a cruiser) in 1947, led to the cessation of all work on it.
Only a few years passed, and the idea of ​​a cruiser with 220-mm artillery again captures the minds of the naval leadership, but now JV Stalin becomes its initiator at the beginning of 1951, and a year later NG Kuznetsov returned from reference presented a pre-sketch project of the new ship (project 66).

The main feature of the cruiser pr.66 became the artillery of the main caliber. Its three-gun 220-mm artillery towers, the CM-6, began to be designed in 1945 for the cruisers of the 82 Ave., then they were planned to be installed on the cruiser 22 and, finally, on the new cruiser of the 66 Ave. A gun with a barrel length 65 of calibers, shot at the ground in 1954, threw 176-kg projectile at a distance of 260 KB at the calculated rate of fire of 4 – 5 shots / min.

The main mission of the ships of the 66 Avenue was to be the fight against cruisers, including armed 203-mm artillery, the last representative of which was the American heavy cruiser Des Moines, which entered service after the war, armed with automated 203-mm artillery units with rate of fire, twice the calculated for the CM-6.

The mass of the American projectile was only 152 kg, and the firing range did not exceed 150 kb, but at the real distance of the battle (less than 130 kb), the Soviet "heavy cruiser fighter" could be a victim. If we consider the Des Moines 203-mm main armor belt, we can say that the 66 cruiser certainly could not “successfully hit all ships of its class,” as N. G. Kuznetsov wanted. This was confirmed by a research tactical game conducted in 1954, which showed that the cruiser 66 Ave could not with impunity destroy enemy heavy cruisers with 203-mm artillery built after the end of the Second World War. The views of the country's leadership on the role and place of large surface ships have changed - the project of the last Soviet large artillery cruiser was handed over to the archive. This time forever!

Ctrl Enter
Noticed oshЫbku Highlight text and press. Ctrl + Enter
We are
The cruisers of the 68 bis project: the Sverdlov missions in the post-war fleet of the USSR. 3 part"Svetlana". History of creation
Military Reviewin Yandex News
Military Reviewin Google News
37 comments
Information
Dear reader, to leave comments on the publication, you must sign in.