How do we avoid the "Crimean Kondopoga" 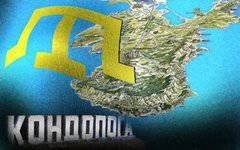 Russian central authority should stop flirting with the Crimean Tatars


While the Crimea was part of the self-proclaimed Ukrainian Republic, it was its problem. Reunited with Russia, he may be a problem for Russia.

And this will happen solely through the fault of the Russian authorities. Because the inhabitants of the Crimea did not want to reunite with Russia in order to provide preferences to those who are called the Crimean Tatars (the mood prevailing among the Russian population of Crimea can be read here. - Note KM.RU).

The conflict with the latter smoldered for two decades, including because it was cultivated by the Ukrainian authorities, creating the Crimean Tatars resettled here to counterbalance the Russian-Ukrainian population of Crimea, just like in Ukraine itself, the same authorities created a counterbalance to the Russians and Ukrainians from the Westerners.

During the March events, the indigenous people of Crimea almost unanimously supported reunification with Russia. The Crimean Tatars (more precisely, the leaders monopolizing their representation) tried to disrupt the very voting on this issue.

The language of the Crimean Tatars declared one of the state languages ​​of the Crimea. Although by all international standards, it could claim only the status of a regional language. Although it is - a relative trifle.

But, firstly, a clear course was taken to legally consolidate the Crimean Tatars of the land self-seized by them over the past quarter century.

Secondly, there is reason to believe that the current authorities have already tacitly agreed to seize their historical and cultural sites. So, according to incoming information, the Bakhchisarai Museum has already been captured and its Russian-speaking director has been displaced in a rather incorrect form.

Thirdly, the law on the rehabilitation of the Crimean Tatars is being prepared. It is clear that since Putin had promised to consider this issue, he will most likely be accepted in one form or another. It is clear that this is a kind of political payment for the expected loyalty.

The question is still in what form it will be adopted, whether it should be accepted from the point of view of not the political situation, but historical the truth. Since today the development of the bill is, according to a number of data, with the conscious exclusion of historians who understand the essence of the moment. And if the law turns out to be similar to those adopted in the late 1990s, it will only cause tension in society and additional dissatisfaction with the government and its next concession to the generation of “whistleblowers of totalitarianism”.

Fourthly, there is an intention to assign the status of the indigenous people of Crimea to the Crimean Tatars. For Russians and Ukrainians living in Crimea, this is a direct insult, because it automatically declares them exactly by those who they are declared in Latvia, Lithuania, Estonia, and sometimes in Ukraine, occupiers and descendants of the occupiers.

If the indigenous people of Crimea are Crimean Tatars, then who are Russians and Ukrainians? Conquerors, two hundred years ago, captured the Crimea.

And the intense reaction to this in the Crimea is already beginning to mature. Of course, the Crimean Tatars in Crimea 12%. But Russians - more than 60%, and Ukrainians - about a quarter. And they fought for the reunification of the Crimea, and they intend to give the status of "indigenous" to those who actively opposed their struggle.

The central elite of Russia has always had a certain flaw in this respect: it preferred to give more and more to love not its friends in certain reunited or liberated regions of Russia, but its enemies, believing that friends would remain friends anyway, and the enemies should be appeased. And very often it ended badly for herself.

Today, Crimea is one and a half million voters who are ready to vote in elections only for Putin and for no one else. And these are hundreds of thousands of people who are ready to pick up if necessary. weapondefending both Russia and Putin.

And if someone after some time tries to arrange in Russia a new “swamp” or his “Maidan”, the Crimeans will not even have to specially organize: they will get under their own way to devour the crowd. Because today in Crimea, Putin is God.

And to change it for the controversial pacification of the Tatars (even if only for the pleasure of Turkey) is not very constructive.

If we talk about rehabilitation in relation to the Crimean Tatars, then we must speak the truth to the end. Yes, people should not be responsible for centuries for the crimes of their ancestors. Yes, not all Crimean Tatars served the Nazis. But then it must be said about the scale of the mass service acquired by them, and that the SS men were sometimes terrified of what the units of the Crimean Tatars did, and entered into armed conflicts with them, defending the civilian population. SS, not anyone!

Today, the leaders of the Crimean Tatars are trying to get everything to the maximum: rehabilitation, captured land, the status of the indigenous people, the quota in power. And at the same time they do not cease to stand in a position in relation to Russia, travel to the structures of its western competitors and try to complain about it and discredit it.

If they behave this way, and if, in addition, the Russian authorities endure all this and “pacify” them, they themselves will not notice how they will make the idea of ​​their new deportation the subject of discussion and active support.