The length of the barrel does not matter


Legalization of short-barreled weapons has many adherents and opponents. Being a supporter of legalization, the author of this material suggests looking at the problem from a slightly different angle.

The term “shortbore” sounds rather slyly, because the barrel length is not the most important parameter of the weapon’s characteristics, the main ones are bullet speed and mass (energy), caliber, number of cartridges that provide the killer and stopping effect of the bullet and the probability of hitting the target. 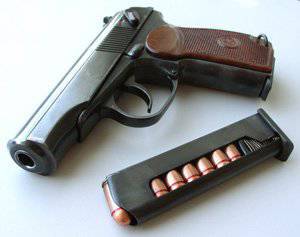 Example - Makarov pistol (PM): the initial speed of a bullet is 315 meters per second, the mass of a bullet is 6,1 grams, the energy is 300 joules, the target range is 50 meters, the slaughter range is 200 meters, the number of cartridges in a cage is 8 pieces. There are models of pistols and revolvers with lower and higher combat characteristics. All of them are designed for use in hostilities and as a civilian weapon of self-defense have significantly inflated characteristics.

Consider a horizontal shot from a height of 1,5 meter (the height of an outstretched arm). A PM bullet, having an initial speed of 315 meters per second, will fall to the ground, flying approximately 150 meters. In the event of a miss, it can hit completely random targets and turn the defender into the defendant for serious articles of the Criminal Code of the Russian Federation. Such a weapon can not only be defended, but also used for purposes far from self-defense. It follows from this that it is not worth using civilian revolvers and pistols as a self-defense weapon.

It is necessary to create a special civilian self-defense weapon, simple, possessing a high level of readiness for use, effective at short distances (up to 10 meters), followed by a sharp drop in speed and energy (slaughter ability), from which it is impossible to penetrate body armor of the 1 class of protection.

History knows examples of the creation of specialized weapons. These are “Velodog” revolvers, the name of which indicates the area of ​​their use - the protection of cyclists from dogs that did not immediately accept a new type of movement. But soon most dogs got used to cyclists, and the attempt to use the Velodogs for self-defense did not develop due to its poor stopping power due to the small caliber and low initial speed of the bullet.

A variant of civilian weapons may look like this: a smooth-bore revolver with the number of cartridges in the drum 4 – 5 pieces, caliber - 15,5 millimeter, the initial speed of the bullet - 175 meters per second, the weight of the bullet - 20 grams, energy - 300 joules. A bullet fired from such a revolver from a horizontal shooting height of 1,5 meters will fly to the ground less than 90 meters before falling to the ground. The large diameter of the bullet will provide a significant loss of its energy at a distance, but at short distances the stopping effect will be greater than in faster speed bullets of a smaller caliber. With short distances, using a smooth barrel will provide sufficient accuracy of shooting, and the self-coil drum circuit is safer and will increase the speed of production of the first shot. In addition, traumatic, signal and other special cartridges can be found in the drum, which can be selected by simply turning the drum. This will make the weapon truly universal.

Civilian weapons must be radically different from combat weapons, they must have such characteristics that will guarantee the prevention of threats to the life and health of the defender, to minimize threats to others and the possibility of their use for criminal purposes.