In Crimea, began arrangement of the state border 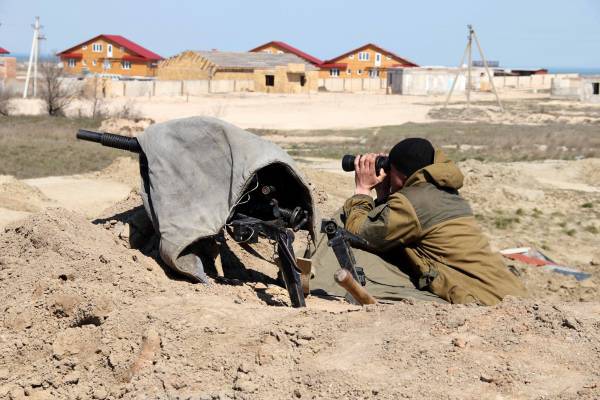 In Crimea, the formation of the staff structure of the Border Service of the FSB of Russia began.


The staff of the border department will include both employees from different regions of Russia and those who previously served in the border service of Ukraine, but decided to stay in the Crimea. According to the "RG", to remain in service, but already in Russia, expressed a desire, more than 70 percent of Ukrainian border guards and almost 90 percent of those who served in the SBU.

Among those who left are mainly the management team appointed to the Crimea from other regions of Ukraine, as a rule, western ones.

Now on the border of the Crimea and Ukraine, the improvement of the border is in full swing, and from two sides. And here and there - dug in armored personnel carriers, concrete blocks and anti-tank ditches. But if the Russian border guards quietly carry out their service, politely watching their neighbors, then provocations happen on the Ukrainian side almost every day.

For example, yesterday at the checkpoint "Turkish Val" Russian border guards stopped a group of 10 people, citizens of different European countries, who introduced themselves as OSCE military observers. When asked where they were following, the officers replied that they were saying they were going across Ukrainian territory to Ukrainian Simferopol in order to trace the dispatch of Ukrainian equipment and weapons to the mainland. They were told that Russia is already here, and not at all Ukraine, and the OSCE mandate alone is clearly not enough for them to travel. Europeans pretended not to believe, tried to refer to the norms of international law, taking everything that was happening on camera. But in the end they were not allowed on the peninsula.

Before that, a German and a Dane flew in from Sheremetyevo to Simferopol. Not only did they not have Russian visas, several pages were also torn out in passports. Naturally, they were immediately turned up and sent on the same flight to Moscow. At Sheremetyevo, foreigners stated that the pages of the Crimean border guards were allegedly pulled out of them when they congratulated them on joining Russia. Both were asked to leave the country. Within a few hours in Europe, some media outlets declared arbitrariness in the Crimea, and immediately Ukrainian border guards temporarily closed all checkpoints on the border with the peninsula. As a result, Crimeans, returning home, had to literally storm through the border.

By the way, the "responsible" is now for all these provocations, as well as filtering Russian journalists on the border by the newly appointed Kiev head of the Azov-Black Sea Department of the Frontier Service of Ukraine in the Kherson, Zaporizhzhya and Nikolaev regions, Colonel Sergey Kosik. He was put to this post immediately after leaving the post of the head of the Simferopol border detachment, which he allegedly defended to the last from the self-defense forces of the Crimea and "polite people". Along with him, only about 100 officers and ensigns went to Ukraine. All the others did not want to. And in many respects because of the personality of the colonel himself, who was called by his colleagues by the eyes "Pirate of Crimea". According to the border guards, not a single poacher boat or tanker with smuggled diesel fuel or "gray" bunkering of vessels in the port passed by the colonel. Everyone had to pay their share. It is curious that the entire adult life from lieutenant to colonel Kosik served precisely in the Crimea. According to colleagues, while ordinary border guards lived from paycheck to paycheck, Kosik traveled in luxury jeeps and dined at expensive restaurants and he lived in a mansion in the elite district of Sevastopol, which is still guarded by armed security guards. However, it was all affordable. Indeed, besides protecting smugglers and poachers, he is also the owner of several Crimean hotels, medical centers, jewelry salons and much more.

True, the Kiev leadership most likely does not know all this and continues to drive people to daily rallies to the border in support of the valiant state guards.

However, our border guards do not pay attention to this anymore - they are used to this visual agitation. True, one meeting, or rather a concert, was liked not only by our border guards and marines, but also by the RG correspondent. After two and a half hours of shaking along the sandy spit that separates Lake Sivash and the Sea of ​​Azov, we reach the village of Strelkovoe. Here the Russians are not only guarding the border, but also a gas distribution station, to which gas comes from right platforms off the coast. While the fighters are showing their uncomplicated location - tents and armored personnel carriers, some movement begins from the Ukrainian side. Several cars drive up to the post. People come out with border and landing flags. They include a loudspeaker: "we are veterans, we came to support the border guards and paratroopers in their difficult service" and include music to the fullest extent. From the speakers is heard "Batyana - Kombat", landing "Sinev". “Listen, and for whom is the concert?”, Our marines ask our border guards, “for us or for the Ukrainian paratroopers?”. “Probably for everyone. Well done, and not a word about politics,” the border officer responds.

Although the Ukrainian paratroopers did not seem to like that “for everyone”. When it got dark, they suddenly arrange their "concert" - they begin to bombard the Russian positions and the territory of the gas station with lighting mines. Some fall dangerously close to the gas pipe and fly into the trenches. In the morning our politely ask Ukrainians: why did they shoot? Those: allegedly in the waters noticed unidentified small size vessels. Ours: well, shoot at the water area, and if the station explodes, it will not seem to everyone. The next night, the Ukrainians continued to shoot at the sea. And on the third stop altogether. As reported intelligence - the mines ran out. We must pay tribute to the Russian border guards and the military - they do not react to any provocations and even vice versa smooth them. As, for example, in the Chongar region on the other from the Rifle Bank of Sevas. On the first night, when both sides entrenched along the border ,. Our scouts decided to check out the Ukrainian patrols. Crawled. In the trenches - no one except the sleeping watchman. Woke up. They asked: "where is everyone"? Fighter: "Yes, we went to an abandoned sanatorium to spend the night." Our: "you want to eat"? "Want". They crawled back and dragged a box of canned meat with the words "feed them, too." So our scouts fed Ukrainian paratroopers for several days. Until they received "humanitarian aid" from neighboring villages.

Ctrl Enter
Noticed oshЫbku Highlight text and press. Ctrl + Enter
We are
Reports from the militia of New Russia for 7 September 2014 of the yearNorth Korea promises a “sea of ​​fire" in response to "provocations"
Military Reviewin Yandex News
Military Reviewin Google News
13 comments
Information
Dear reader, to leave comments on the publication, you must sign in.