Hungary wants to participate in the carving of the Ukrainian pie

April 14 2014
152
April 6 held parliamentary elections in Hungary. According to party lists, 44,46% voted for the Fides party. She received a mandate from the 133 National Assembly (almost 67%), which means a complete victory. Thus, the ruling party of Prime Minister Viktor Orban retained a majority in parliament. “Fides” is known for critical (and even scandalous) statements addressed to the European Union, statements against “tolerance” and for the traditional family, aspirations for the “Great Hungary” and “Eastern Union”. Some experts doubted Orban’s victory in the elections, but they miscalculated. 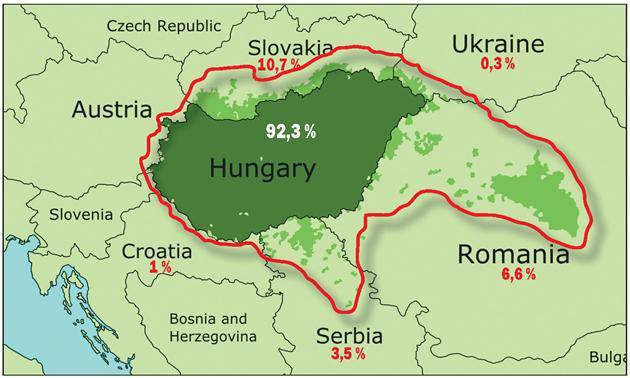 The popularity of Fides is built on a relatively competent domestic social policy, bordering populism. Only measures to reduce utility tariffs (of which, by the way, millions of Russians dream, but dreams remain dreams) gave the prime minister enormous chances of winning the elections. In addition, Mr. Orban managed to find funds for his domestic policy: transnational corporations and banks doing business in the country had to pay extra. tax (for which the EU is separately offended by Orban).

Orban’s foreign policy can also be called literate. In enterprise, the prime minister can not refuse.

In March, the Russian government approved a draft agreement on the construction of new Paks NPP units in Hungary. As is known, our nuclear scientists love not only dumping on the world market, but generally building on credit. Here and in the case of Hungary, everything goes according to a run-in scenario: for this project Vnesheconombank gives a loan of up to 10 billion euros; government order signed by Dmitry Medvedev. The Russian loan will provide 80% financing of the project, and the Hungarians promise to pay the remaining one-fifth. No, not tomorrow and not in a couple of years, but after a year of 21, and the term runs off not after signing the contract, but after the power units are commissioned. There are, however, small "floating" interest on the loan - from 4 to 4,9%. Will Hungary pay the loan? It is doubtful - even taking into account the fact that interest payments on the loan are assigned to 2025-2046. 10 billion euros. - This is more than one tenth of the country's GDP. Who knows what will happen to Europe by the middle of the century! .. Of course, under these conditions Russia has no competitors on the global market for nuclear energy. Of course, this proposal is profitable for Hungary, and the people should carry the enterprising Orban on their hands.

Why all this Orban, of course. He will reduce the price of electricity in the country - he promised it. For this, he will be re-elected again. And whoever will pay interest there in some 2046 year, he is hardly interested. Politicians never worried about the price of populism. In any case, the European Union, with which Orban fell out almost into smoke, is unlikely to financially help the “Great Hungary” with its cool nationalist ways and intolerance towards gays.

Premier cunning and can tack. If, having come to power in 2010, Orban was against the Russian South Stream, now he says: “We Europeans need Russia. We will need sooner or later - and sooner rather than later - a strategic alliance with Russia. ” Now Orban is for South Stream.

Speaking of a special love for Russia (connected more with an economic interest, to steadily acquire gas from Gazprom, rather than with politics), under the guise of Orban dreams of cutting off the stratum from the Ukrainian Transcarpathian region. He is actively promoting the idea of ​​granting citizenship to Hungarians who live in neighboring countries, including the Transcarpathian region of Ukraine. No, Orban doesn't say he makes. To date, more than six hundred thousand Hungarians abroad have received citizenship, and any of them has the right to vote in the Hungarian parliamentary elections, including the Fides Party. Very wise politics, right?

At the PACE session that took place the other day, Hungary went even further in the Ukrainian question. The Hungarian delegate told the audience that Ukraine is an “artificial state”. Transcarpathia for many years belonged to Hungary. As for the Transcarpathian Rusyns, “no one recognizes them in Ukraine.” The Hungarian representative agreed to the fact that he even turned off the microphone.

Therefore, the statement of the Hungarian government about the condemnation of the Russian “annexation” of the Ukrainian Crimea is a little surprised.

However, Hungary, after all, only good wishes Ukraine. And it even takes ... to supply natural gas there. Do not trust anybody all April? But no, this is not a joke at all and not a funny “fake”.

You need to know that Hungary receives most of the gas from Russia through a pipeline that passes through the territory of Ukraine.

And now the Hungarian Foreign Minister Janos Martonyi said that everything was already prepared for the start of reverse supplies. At the same time, he reminded the world community that Budapest supports the territorial integrity of Ukraine. And in order to understand him correctly, he added that "the annexation of Crimea by Russia is illegal."

The duplicity of Budapest is truly infinite! And therefore it does not surprise another, earlier statement.

Recently, namely 20-21 in March, a summit of EU member states was held in Strasbourg. The final statement by European Council President H. van Rompuy was this: the EU intends to reduce its dependence on Russian gas. And cut - in the next few years. “We are determined to reduce our energy dependence on Moscow,” said the head of the EU Council.

What Europe will replace Russian gas? American! Shale gas is expected to be imported from the USA.

Four Central European states of the EU, namely Poland, the Czech Republic, Slovakia and Hungary, at the summit asked the US to supply them with liquefied natural gas and oust the Russian Gazprom from their markets. Washington received an official letter from these very central Europeans: "The presence of American gas in Central and Eastern Europe at this critical time for the region will be highly desirable, as well as the decision of the Congress to supply the region with liquefied natural gas."

Hungary in the list of signatories, of course, is not accidental. In vain Western Europe compares Orban with Lukashenko. The Hungarian politician is much more flexible and tortuous ...