In Poland, created their own assault rifle MSBS-5,56

April 11 2014
46
Photos of new assault rifles, which are being developed in Poland, have appeared on the Internet. One of them is made according to the bullpup scheme, the second according to the classical scheme. These rifles are MSBS-5,56 (the Polish name Modulowy System Broni Strzeleckiej kalibru 5.56 mm is a modular shooting system in 5,56-mm caliber). An assault rifle is being developed in the interests of the Polish army. Currently, the Polish designers are working with two variants of the rifle, different layout. Thanks to the modular principle, the MSBS-5,56 assault rifle can be easily transformed into a carbine, a light machine gun or a sniper rifle.


It is reported that an assault rifle is being developed from the 2007 of the year. It is created by the University of Military Technology WAT (Military Technology University) in Warsaw and the company FB Radom. The rifle is being developed under the standard NATO cartridge 5,56x45 mm, while also considering the option of using the cartridge 7,62x51 mm. Work is underway on two options. weapons - in the classic layout with the store, which is located in front of the pistol grip of fire control, and made according to the bullpup scheme with the rear location of the store. Initially, the serial production of the MSBS-5,56 rifle was planned to begin in 2014, but today we can say that the dates for the serial production of the assault rifle were postponed. In this case, the rifle is getting closer to serial production and adoption by the Polish army.

5 March 2014 in the city of Radom as part of the ceremony of accepting the new buildings of the Archer Factory (Fabryki Broni Łucznik) a new Polish assault rifle, made according to the bullpup scheme, was first introduced to the public. The opening ceremony was associated with the completion of work and the adoption of the new weapons factory, located in the northern part of Radom. The opening ceremony was attended by high-ranking Polish officials: Speaker Sejm Eva Kopach, Prime Minister of Poland Donald Tusk, Minister of Finance Vlodzimierz Karpinski and President of the Industrial Development Agency Wojciech Dabrowski. The area of ​​the new enterprise is 3,5 ha. At this production site there are several industrial buildings with a total area of ​​17 thousand square meters. meters, of which 12 thousand square meters. meters accounted for production workshops. The first investments were made in the project in October 2012, the cost of the project was 100 million zlotys. 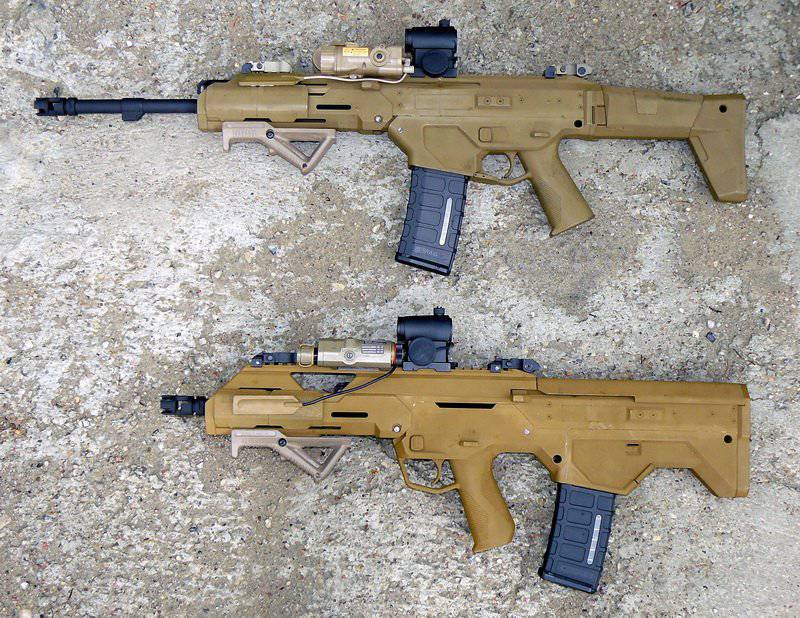 At the opening ceremony, the latest product FB Radom was presented - the MSBS-5,56 / RAWAT assault rifle. Currently being tested demonstrator rifle. As expected, the completion of development and preparation for serial production will take a few more months. In that case, if the development program will go on schedule, and the Polish military will make an order for a new weapon, the military tests of the assault rifle can be completed in 2016 year. In this case, experts note that in appearance the Polish rifle MSBS-5,56 very much resembles the Bushmaster ACR American rifle.

The new Polish assault rifle uses vapor-automatic equipment with a small stroke of the gas piston. The receiver of the assault rifle consists of two halves, which are interconnected by means of pins. In the upper half is located the bolt group and the trunk, in the lower one there is a trigger mechanism, as well as the receiver of the magazine. The trigger mechanism mounted on the assault rifle provides firing with single ammunition and fully automatic fire. A special flag-translator of firing modes is located above the MSBS-5,56 pistol grip and duplicated on both sides. The magazine's latch is located on the left side in front of the trigger guard, in a familiar place for those familiar with American M16 rifles.

From the top of the receiver, as well as on the rifle's forearm, there are Picatinny-type slider guides on the bottom and on the sides, which are designed to be mounted on a rifle of various devices such as laser aiming indicators, tactical flashlights, sniper sights, additional front handles and bipods for better retention and more effective firing and so on. The rifle in the classic version of the layout is equipped with a telescopic butt, which has the ability to adjust the height of the cheek and folds on its right side. Also, especially for the new assault rifle, the under-barrel grenade launcher of the bullpup design was created, the barrel of which can be reclined to the left side in approximately the same way as the German AG-36 grenade launcher. 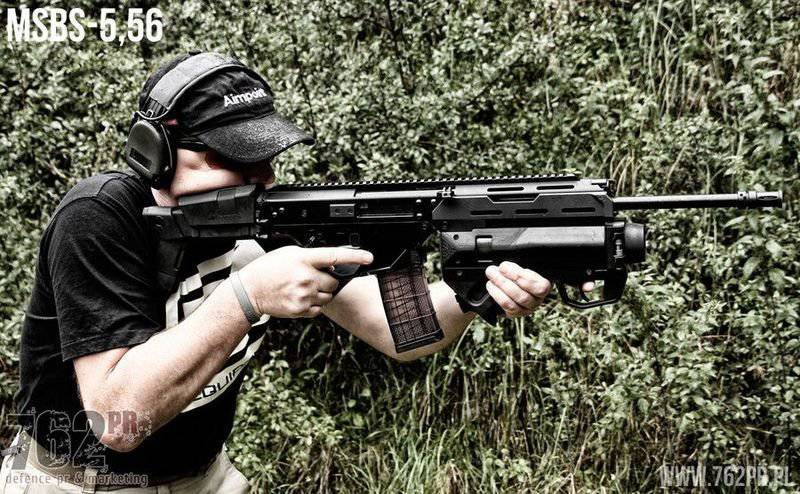 The assault rifle was created under the NATO cartridge 5,56x45 mm, along with it uses the original plastic box magazine, which is designed for 30 cartridges. The effective range of this rifle is about 400-600 meters. The modularity principle implemented in it makes it easy to convert a rifle into a carbine, light machine gun or a sniper version. The assault rifle is composed of standard mechanical sights, which were made removable and foldable.

There is information that according to the results of the preliminary tests of the assault rifle in the bullpup layout, which have been going on for several months already, a number of changes were made to the design of the weapon by its creators. In parallel, tests were carried out rifle classic layout, which also led to the introduction of some changes in the draft. The MSBS-5,56 automatic rifle is said to be comfortable, easy to learn, has low recoil and is well balanced. Below is a list of changes that have been made to the MSBS-5,56 version of the bullpup layout:

- the shutter latching unit in the rear position and the shutter delay button were changed;
- the shape of the trigger guard and chamber was changed;
- A new safety lever;
- the shape of the magazine receiver was changed, it is reported that now the rifle will be able to use different types of magazines, including increased capacity for 60 cartridges;
- a removable pistol grip is installed, which is compatible with the M4 carbine and its variants;
- the charging handle was understated, now the various accessories installed on MSBS-5,56 do not interfere with the arrow when reloading the weapon. 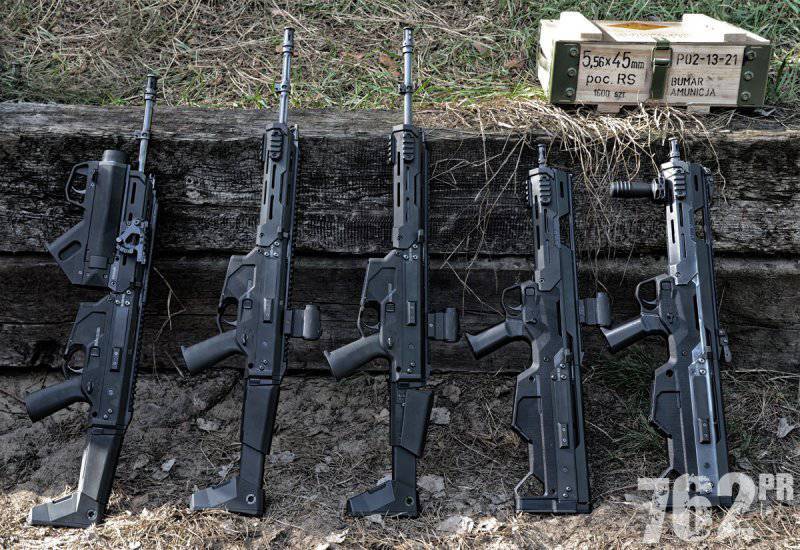