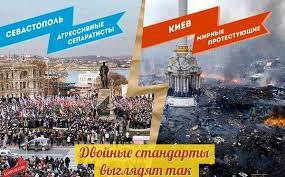 Southeast Ukraine is in turmoil. The local population does not want to recognize the Kiev interim government, considers it illegitimate and stubbornly resists the onset of the democratic “kingdom of God” in each individual Russian-speaking region. Outraged people seized the buildings of state administrations in Kharkov and Donetsk, the premises of the SBU in Lugansk.
In principle, everything happens perfectly symmetrical to the February actions of supporters of the Maidan. As then, EU flags were hoisted over captured buildings in western Ukraine, and now in Kharkov and Donetsk, Russian flags were hoisted over objects defeated by Prokiev’s authorities.


However, there are differences. For example, Donetsk and Kharkiv people's republics have now been proclaimed. In Kiev, no one made such statements — this is understandable: the Maidan believed that it had already seized Ukraine entirely. In Kiev, no one resorted to the help of foreign military professionals, but in Kharkov, under the form of a special unit "Jaguar" they were hiding, such is the now common point of view, mercenaries from a private military company Greystone Limited. They also repelled the regional administration building from the anti-Maidan demonstrators.

In Donetsk, too, they came to repel the building of the regional administration. However, there they were doused with gasoline along with the buses (without setting fire) and only after that they were “gently asked” for an assault. As a result, the assault did not take place. But the “peaceful protesters” of the Maidan, we recall, in January and February threw the “Golden Eagle” with the lit Molotov cocktails without warning.

And, of course, the level of repression of the current leadership of the Ukrainian police - where Sashko Bilom is there with his ostentatious blasphemy on camera. Seventy activists were detained in Kharkov, Avakov said, noting that they "are being taken to Kiev in order to avoid provocations on the ground." Although it would be more appropriate to say that they are being taken in an unknown direction, because Avakov's words are the only evidence of their location today. Neither the opportunity to see relatives, nor lawyers ... There is reason to fear that a “Heavenly hundred” may appear in the southeast - that is, the dead.

Looking at everything that happens, you involuntarily ask yourself whether the “Ukrainian spring” brought with it a democracy, which, according to the aspirations of Maidan supporters, should somehow have arisen after the signing of the Association Agreement with the EU.

The scandalous “laws of January 16”, called upon to counteract Maydanovskiy extremism, were replaced by other laws adopted not by “package” and not on one day, but absolutely similar in severity. The “16 laws of January” assumed responsibility for the “propaganda of fascism”, according to which quite a large part of Maidan supporters could pass. Now we have a law “on separatism”, according to which one can imprison any active opponent of Maidan, and for life. No one will understand for a long time. As they say, everything is clear to the court. It seems that the interim government of Ukraine puts an equal sign between the words "separatist" and "Russian".

The “16 laws of January” stipulated that Internet media must be registered, otherwise they will be closed, and for “the dissemination of information that violates the law”, access to the site may be blocked. What do we have now? That's right, a total ban on Russian media reporting in an unfavorable light for the interim government. Some Ukrainian media are also closed.

In February, in the state headed by the “bloody dictator” Yanukovych, the invaders of administrative buildings were proudly called revolutionaries and fighters against the regime in the media, and in April in the now democratic state of dissent, violating all the principles of journalism, television channels unanimously proclaim “separatists”.

Meanwhile, there is no hope for the resumption of dialogue between different parts of Ukraine already split. Not at the grassroots level, nor at the level of the authorities.

Most Maidan supporters either believe that the southeast supports them happily, and the protest suits an insignificant minority and agents sent by Putin personally, or they are confident that the insurgent regions must be firmly suppressed and cleaned out of the “Muscovites”. They vehemently deny the fact that their fellow citizens may have an alternative point of view. Or in absentia deprive these fellow citizens of such a right.

The policy of "tightening the screws" causes even greater discontent among residents of the southeast. No attempts to organize round tables, hold negotiations, introduce leaders (not delivered by Kiev, but true, popular leaders) of the Russian-speaking Ukraine into the government. No attempts by the central government to express the interests of the inhabitants of the whole country, and not only its western part. And not a word about any referendum - neither about the status of each individual region, nor about the desire to join the EU or the CU, or to maintain non-aligned status.

"Ukrainian Spring" has divided history countries on the "before" and "after." It was assumed that the “after” would be different from the “before” in that the state suddenly appears from nowhere a democracy, corruption disappears, and the inhabitants suddenly become rich and happy. In fact, “after” brought the people of Ukraine a split in the country. Representatives of the opposing camps no longer want to be in the same state with each other, feed on mutual hatred, make humiliating jokes.

The interim government did not bother to create an image of the future that is attractive to the whole country — their version of Ukraine, Russophobic and pro-Western, is clearly unacceptable for residents of the southeast.

In addition, double standards continue to operate. Last Tuesday, for example, a group of disgruntled people seized the Lviv regional prosecutor's office. But for some reason, the invaders did not beat out the attack aircraft from the "Jaguar" (or Greystone) and did not call them separatists. And because they were supporters of the "Right Sector". They did not like the prosecutor appointed by Kiev, and they thwarted the procedure for its submission. Well, do not put the same because of such a trifle of their "zapadenskih" lads. They are still useful.

Ctrl Enter
Noticed oshЫbku Highlight text and press. Ctrl + Enter
We are
What ships of the Ukrainian Navy raised the flag of St. Andrew (photo review)Civil war in Ukraine: on the trigger
Military Reviewin Yandex News
Military Reviewin Google News
113 comments
Information
Dear reader, to leave comments on the publication, you must sign in.