Second Chernobyl on the way? 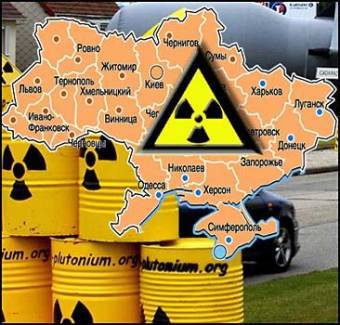 Anti-Russian insanity in Ukraine is growing stronger. Okay, the idea is there is a reverse gas supply, what's the difference where they come from, from Slovakia, Slovenia or from where. Pay all the same-Russia. And I don’t think that in Europe they will be happy to lend Ukraine gas.


But the abandonment of Russian nuclear fuel and the planning of signing a contract with the American firm Westinghouse is already an obvious insanity.

Still, nuclear power plants - this is not a car. Aby that there will not thrust. Moreover, the aforementioned company already had the sad experience of cramming its fuel elements into the reactors of the South-Ukrainian NPP in the 2011 year. It turned out not just crooked. There was a scandal, the essence of which was poor-quality production of shells of fuel cell rods, which began to deform directly in the reactor. It cost. With the help of our own experts. And here again.

In general, Westinghouse has been sleeping for a long time and sees that it will press our enterprises from the nuclear fuel market. There was an experiment in the Czech Republic, was in Finland. The result - after thoughtful reflection, both Czechs and Finns continued to use our fuel. Apparently, for good reason.

There are several aspects related to fuel for nuclear power plants.

The first. The mentioned stations were built by our specialists and “ground” for our fuel. Once again, the NPP is not a car, it’s all the same to the car, whose gasoline in the tank, if only it complies with the standards. Nuclear fuel has many aspects to use. And just to take and stuff instead of the Russian American in favor of political ambitions - to put it mildly, it is risky.

Changing one type of fuel to another is not a quick process. It must be justified and calculated.

The second nuance. Unfortunately, in the field of nuclear energy, the United States is not a superpower. They were not able to organize the processing of waste items. Therefore, they simply dispose of all their fuel elements. That is, stored in spetsmililnikah. On its territory.

Under all contracts for the supply of nuclear fuel, the USSR and Russia included and include a clause on the utilization and recycling of used elements on their own. That is, we take, process and so on.

Alas, Westinghouse does not provide such a service. And then, that they are abnormal or something, someone's there to drag the spent fuel to themselves and store? His, as they say, enough.

The third point. This company is the author of a very highly acclaimed project in the recent past. What am I talking about? Right, Fukushima. It was Westinghouse that created this, sorry, miscarriage from nuclear energy and ensured its proper operation. I do not want to add anything else, we all watched the reports, we all heard the opinions of experts that not everything was done properly.

Politics, ambitions, ambitions, but all the same and. about. Ukrainian authorities sometimes recall that they are not only yelling their heads on Independence. And do not look for nuclear adventures on the European backs.

And I would advise the gentlemen from the IAEA to take up the real work. That is to reason with pseudo-politicians who have imagined themselves as experts in the field of nuclear energy. Until it's not too late!

Ctrl Enter
Noticed oshЫbku Highlight text and press. Ctrl + Enter
We are
Results of the week. “To sell something unnecessary, you must first buy something unnecessary, but we have no money!”Results of the week. “In our cooperative, the board is always agreed”
Military Reviewin Yandex News
Military Reviewin Google News
183 comments
Information
Dear reader, to leave comments on the publication, you must sign in.