Evgeny Pozhidaev: Turkey has no chance of a "small victorious war" against Syria 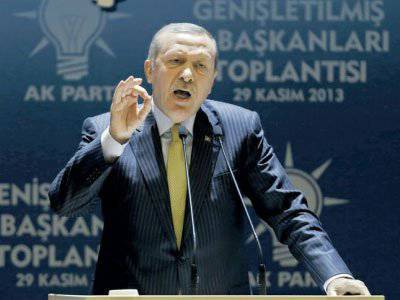 Turkey’s military activity on the border with Syria has intensified, and in parallel, a record of the conversations of Prime Minister Recep Erdogan, who is clearly hungry for a small victorious war against the southern neighbor, appeared. The situation is more than explainable - Erdogan’s position is precarious. The split within his own party, endless corruption scandals and a sharp slowdown in economic growth is a bad symptom. Potential Turkish Lukashenko risks them not to become and just be behind bars. However, a common record says that someone really does not want to fight - and this "someone" is most likely the Turkish military.


Consider the situation. In relation to the Turkish army dominates the North Korean syndrome - a large and overpriced numbers are perceived as a sign of irresistible power. In reality, traced by all sorts of sources, the 720-thousand Turkish army does not exist - there is the 590-thousand army, while around 150 thousand - civil servants. The second caveat is that the cost per soldier in Turkey is about four times less than in the Russian Federation. The Turkish army has long existed in the framework of the almost Maoist paradigm (the number compensates for the technological lag) - and the post-effects of this situation still persist. As a result, the cost of new weapons in recent years is about 1,5 billion (the cost of a modern heavy fighter is 80-100 million).

Syria's army before the war was 220 thousands. Now she is more. The battles killed 3-6 thousand. At the same time there is a regular call, demobilization, of course, not - as well as the classical mobilization. It should be borne in mind that with respect to the Syrian army, the effect is the opposite of the North Korean one — it is stronger than it seems. Asad is forced to save resources, relatively new and modernized machines in case of an external invasion; periodically in Syria, a technique emerges that it does not "officially" have.

The final situation looks like this. The Turkish fleet has, of course, an overwhelming superiority over the Syrian one. However, the problem is that its possibilities for strikes on the coast are limited by artillery fire with a range of 23 km. Large-scale landing is impossible - in the asset of Turkey only 4500 soldiers of the marines and a very weak grouping of landing ships.

The Air Force has the basics of an assault force - 208 F-16 light fighters (more precisely, their licensed copies of local production). They are complemented by 124 "Phantom" and 41 F-5 "Tiger" (old and budget, but quite successful "fighter for the poor"). This is an impressive force, but the Turkish Air Force is far from the Israeli Air Force, either quantitatively or qualitatively. The conquest of superiority in the air is hampered by the absence of heavy fighters, electronic warfare aircraft and the fact that a full-fledged long-range radar detection aircraft (Boeing 737 Peace Eagle) as part of the Air Force is only one (the purchase of four is planned, but the contract is delayed).

Work on the ground will also be imperfect - it is almost entirely assigned to light fighters. 44 attack helicopters "Cobra" and "Supercobra" - far from a decisive force in the application to thousands tanks neighbors. It is planned to begin production of a local copy of the Italian "Mongoose", but so far only single copies have been produced.

The possibilities of Turkey will greatly increase after the planned purchase of one hundred F-35, but so far they are far from epic. It is difficult to establish the training level of pilots, but during the confrontation with the Greek Air Force in 1995, the Turkish aviators did not perform well (two aircraft crashed while maneuvering).

However, for the Syrian Air Force, which has only 19-24 modern Mig-29 fighters and 50-100 hopelessly outdated Mig-23s, naturally this is an overwhelming opponent - although the Syrian aviation It turned out to be in unexpectedly good condition, and the training and motivation of the pilots was quite acceptable. Assad quite rationally "saved" his best aircraft in the event of an external invasion.

Damascus defense is in a far from brilliant state, and is unable to withstand a massive strike. However, in the case of Turkey, it is capable of limited surprises.

Let's look at ground forces. Formally, Turkey has a 3363 tank. This is quite a lot, but the qualitative composition of the tank park has unpleasant nuances. Turkey has 339 tanks "Leopard-2", 392 "Leopard-1", 1206 М60 of various modifications (of which 170 are deeply modernized with the help of Israel М60-Т Sabra Мk II with 120-mm gun and modern fire control system), more 1200 M48. The latter are already withdrawn from the combat units due to outdated obsolescence, with the exception of 287 in Cyprus. Indeed, only Leopard-2 and M60-T Sabra (the Israelis have left only the body and chassis from the original M / NUMX) are modern from this list - a total of 60 machines.

Both tanks radically exceed the T-72 of Syria - however, it obviously has them around 1500 (during the fighting no more than 100 was lost. In other words, for Turkey there is a rather unpleasant balance of forces. Throwing into the battle the non-modernized M60 and Leopard -1 "in the first line, or used in urban environments - fraught with massive losses in armored vehicles. Both cars (especially the Leopard-1 with its ephemeral armor) are" transparent "to modern anti-tank weapons from almost any angle and distance. Massive Teri M60 were quite typical even in 1970-1980-x ( "Yom Kippur War" and the Iran-Iraq war) in collisions with T-T-62 and 55, 3250 whom Syria.

The modern armored infantry fighting vehicles comparable to “Bradley” and suitable for effective offensive actions in the style of a famous throw to the center of Baghdad are few in the Turkish army - with a certain degree of conventionality, only 102 FNSS Akinci can be classified as such. The rest - ersatzians based on the old American armored personnel carrier M-113 (563 ACV-300). In the near future, 400 of the newest Tulpar infantry fighting vehicles may begin to enter service, but so far they are not in the army.

The same situation with the BTR - really modern cars in Istanbul, only 154 (102 Yavuz and 52 FNSS Pars - all ordered 600 machines). The rest is 2831 armored personnel carrier, representing the variations on the theme M113, or light vehicles. Armed Syria, however, 2450 old Soviet BMP-1 and BMP-2, plus about 1000 old Soviet and Czechoslovak BTR (ranging from extremely archaic BTR-152 to just the old OT-64). However, recently, relatively modern BTR-80, apparently delivered by Russia already during the conflict, have been observed in service with the Syrian troops. In other words, with some effective resistance, the losses of the Turkish ground forces will be very large. This is either the Terrible or extremely slow progress in the assault of cities. The American Thunder Rush in Baghdad was ensured primarily by the low vulnerability of their armored vehicles.

Syria has 450 full-fledged self-propelled artillery systems manufactured since the 1970, 50 self-made ersatz, more than 1,500 towed tools of post-war development (some of them are actually installed on the car chassis), 300 Gradov and their North Korean clones. Further, it was recently revealed that the Syrian army is armed with the 36 MLRS "Uragan" and in unclear quantities the most powerful Russian MLRS - 300 mm "Smerch". The number of MLRS of its own production (Khaibar-1) and unexpectedly floating up in large numbers of Iranian systems (Falak, etc.) is almost impossible to establish. In other words, although Turkey is rapidly growing, while it is by no means a military superpower. At the same time, her “opponent” is by no means as weak as it seems - Assad has so far tried to suppress the insurrection with “second line” forces, keeping the first in case of an external invasion.

It should also take into account the difference in experience. The Turkish army has a vast experience of counter-partisan actions, but its latest experience of the classical war is the operation “Attila” (invasion of northern Cyprus). In other words, we are talking about an extremely local war with a motivated, but poorly trained and armed militia, with the sinking of its own destroyer and a miss past the landing site. Probably, with any large-scale hostilities, Turkey will have problems in the style of the Red Army arr. 1941 th. At the same time it is confronted by an army with a vast experience of hostilities. In other words,

Ctrl Enter
Noticed oshЫbku Highlight text and press. Ctrl + Enter
We are
Yevgeny Pozhidaev: A failed empire: who confronts whom, and why, on Turkish streets?Lukashenko: Russians, Belarusians and Ukrainians are sick of Western democracy
Military Reviewin Yandex News
Military Reviewin Google News
45 comments
Information
Dear reader, to leave comments on the publication, you must sign in.