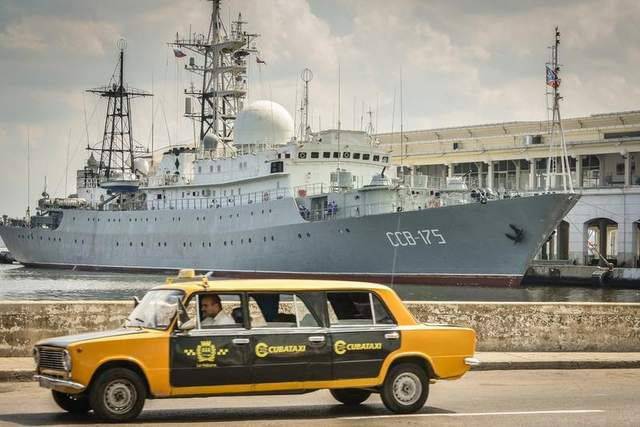 The hype over Russia's creation of military bases in Latin America and the Caribbean does not subside. Media speculations about the functioning of the “secret” bases of the Russian Navy and Russian Air Force regularly appear in Cuba, Nicaragua, Venezuela, and even Argentina. Most often, such messages are accompanied by photographs of the Tu-160 strategic bomber (White Swan), Tu-95MS, the Peter the Great missile cruiser, the large Admiral Chabanenko anti-submarine ship, which in 2008 marked the start of Russian guest visits aviation и fleet to the American continent. The most recent example is the entry into Cuba of the Russian reconnaissance ship Viktor Leonov.

In November 2013 of the year, the National Assembly of Nicaragua ratified a government decision allowing Russian military units, ships and aircraft to visit the republic during the first half of 2014. Their crews were given permission to participate in the training of Nicaraguan soldiers and exchange experience with them. The adopted document also mentions ships of the Navy and airplanes of the Cuban Air Force, Venezuela, Mexico and the United States. In June of this year, the government of Daniel Ortega will again appeal to parliament to extend this document for the next six months.

Russian Defense Minister Sergei Shoigu recently announced plans to increase the number of bases abroad. He noted that negotiations are underway with Cuba, Venezuela, Nicaragua, Vietnam, Singapore and the Seychelles. Russian Deputy Minister of Defense Anatoly Antonov explained the situation in the following way: “When it comes to enhancing the presence of the Russian Navy in Latin America, we mean, first of all, the creation of conditions for a simplified procedure for our military ships to enter the seaports of the countries of the region. Taking into account their considerable remoteness from the shores of Russia, we, of course, are interested in replenishing water and food supplies, organizing the rest of our seamen. In some cases, we must be confident in the possibility of small and medium repair of our ships. ”

On the prospects for the Russian presence on the shores of Latin America, said in a speech by President Daniel Ortega before the Nicaraguan military 6 April. The Sandinista government, after returning to power in 2007, was determined to cooperate with any country that would support the strengthening and modernization of the army. There was no hope for the USA. Despite Washington’s previous close ties with right-wing governments, the Pentagon’s attempts to equip the Nicaraguan army with modern weapons did not undertake. The ideology of Sandinism has always been perceived in the United States as hostile. For this reason, the Nicaraguan leadership turned to Moscow. Far-reaching MTC agreements were signed. According to Ortega, Russia's contribution to the rearmament of the army was "sustainable, reliable and extremely important." It was accompanied by the provision of socio-economic assistance to the Nicaraguans without any conditions. Deliveries of wheat, agricultural machinery, buses and cars. Significant funds were allocated for humanitarian and other purposes, including the elimination of the consequences of natural disasters.

Analyzing Ortega's speech to the military, the conservative La Prensa newspaper, published in Managua, noted that Ortega "justifies the possibility of creating Russian bases in the country." Here is a quote from his speech: “And how many warships of the United States called (in our ports) from 2007 to 2012 a year? How many US ships spent months in our ports in the Caribbean and the Pacific? Military ships that came with the missions of the world! And how many American soldiers and officers landed in our country in order to deploy their bases ... (Foreign) bases are prohibited by the Constitution, but the bases (in fact) were deployed after all. ”

For Ortega, strengthening the country's security remains a strategic task. He particularly emphasizes the need to strengthen the fight against drug trafficking, given that Nicaragua is geographically “at the crossroads” of cocaine and other hallucinogenic supplies from Colombia, Peru and Bolivia to the United States. The armed forces of Nicaragua must have modern operational capabilities to intercept and destroy narcotic goods on land, on water and in the air. It would seem that the modernization of weapons should help the US Drug Enforcement Administration (DEA), which has long been operating in Nicaragua. However, the DEA is building cooperation, based on their own interests, which are not always clear to Nicaraguans.

The authoritarian methods practiced by the DEA are causing more and more rejection among Latin American security officials. For this reason, in Nicaragua and other countries of Central America, they reacted positively to the Russian drug police training project in a special school opened in Managua. It is taught by professionals from the Federal Drug Control Service. Cadets from Nicaragua, El Salvador, Panama, Honduras, the Dominican Republic and other countries in the region are studying. The first issues of operatives took place. Americans jealously look at the successful work of the Federal Drug Control Service in Nicaragua and in general in the Latin American direction. For this reason, Viktor Ivanov, Chairman of the State Anti-Drug Committee, Director of the Federal Drug Control Service, has been blacklisted by the United States.

The Pentagon also views the cooperation plans of Russia and Nicaragua in the exploration and use of outer space as “very suspicious.” The agreement provides, inter alia, for the installation of a GLONASS correction and monitoring system in Nicaragua. The US Embassy Managua, through its media outlets, is promoting a campaign against this project, focusing on its “likely” use by Russia for espionage. This embassy concern, in which most of the 200 diplomats are members of the US intelligence agencies, cannot cause anything but a smile.

As for the development of military ties between Russia and Venezuela and Cuba, it appears that in the foreseeable future the task of creating permanently operating Russian bases there with an extensive infrastructure and military personnel deployed for long periods will not be assigned.

The "provocative duck" called the Russian Foreign Ministry information about the creation of a Russian military base in Argentina. The only foreign base off the coast of Argentina is located in the Malvinas Islands, occupied by England. Argentine President Cristina Fernandez called the islands the “nuclear base” of NATO, “the largest existing base south of the 50 parallel”.

NATO also intends to involve the armed forces of Colombia in the activities of the bloc. In June, 2013, the Colombian Minister of Defense, Juan Carlos Pinzón, signed an agreement on cooperation and information sharing with NATO in Brussels. Colombian President Juan Manuel Santos said in this connection that the agreement was concluded “with a further aim” for the entry of Colombia into NATO.

In one of the publications on the website aporrea.org, it was noted that an adequate response to the global military expansion of the United States and NATO would sooner or later be given: . If the United States flooded Europe with missiles aimed at Russia, it is natural that Russia can respond accordingly. The culprit in the spread of violence in the world is the United States, seeking to preserve its hegemony. After the defeat in Afghanistan, the Americans are forced to leave this country, without having achieved the creation in it of base bases with missiles aimed mainly at Russia, China, India and Iran. But the conclusion is obvious: after the Second World War, the United States was the only aggressor on the planet. ”