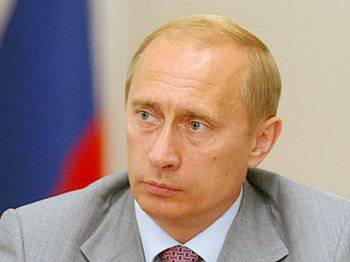 Prime Minister Vladimir Putin addressed the State Duma with a report on the work of the government in 2010. The speech of the leader of United Russia was more like a pre-election socio-economic program for the development of Russia up to 2020, a very populist, very wordy and “depoliticized” one.

Vladimir Putin, in fact, was not so much accountable as, as it is fashionable among experts recently, he painted a picture of the “desired future” for Russia. It turned out very premier at the premiere. According to him, over the next ten years, Russia will be expected to double economic growth and production, a victory over inflation, the provision of apartments to all military men and veterans of World War II, and much more. Responding to questions from the “most respectable public,” Putin also promised not to censor the Internet, not to make fishing for a fee, and not to join the WTO blindly, because Russia is “waiting for an ambush.”

At the same time, as it should be during the economic report of a representative of the government, there were almost no statements that could be evaluated from a formal point of view as a political statement in the speech of Vladimir Putin - with the exception of the phrase about “liberal” shyness. On the contrary, the very harsh criticism from the leader of the “Socialist Revolutionaries” Nikolai Levichev, sometimes even directed personally against the prime minister, the prime minister chose not to notice on the grounds that she was “political” and clearly should be considered in the context of the election campaign.

And yet the prime minister himself explained why his speech, too, should be regarded precisely as an electoral political speech. “The most important guarantee to avoid various social upheavals is a socio-economic policy in the interests of the Russian people with an obligatory positive result in our joint work with you,” said the prime minister in particular. According to him, “if we maintain a healthy socioeconomic immunity of the country, no quasi-political influenza will allow itself.”

In other words, while talking about the economy and building plans for a positive socio-economic development of Russia at least until 2020, Putin showed concern for political stability in the country, so that, to put it in his own words, “certain elements that are trying to destabilize something” it could not.

And if so, Putin’s program for the election of 2011-2012. it is quite possible to study on the basis of that “report” on the future, which the prime minister spoke at the State Duma. Firstly, he almost literally repeated the famous political figure of the beginning of the 20th century, the head of the Council of Ministers of the Russian Empire, Peter Stolypin. He recall, just 100 years ago said: "Give me only 20 calm years - and you do not recognize Russia."

In turn, Vladimir Putin, who already has more than 10 years of governing the country at his disposal, asks somewhat less, and hinting at least on the entourage of President Dmitry Medvedev, says: sometimes unjustified liberalism or social demagogy. " So, the first point of the program of Vladimir Putin is 10 years of quiet development without radical reforms and obvious changes.

The second point is the notorious diversification of the economy, which the prime minister has been talking about all the past 10 years, including being the president. This item is clearly rather declared, but not really a priority. This was evident if only by the way Putin was confused with the “social” figures and at the same time with what knowledge he spoke about the Nord Stream project and the new oil fields where production began in recent years.

The third point of the program is a positive assessment of the role of the Soviet Union. Putin has gone from direct assessments of the so-called “de-Stalinization”, which is offered by experts close to President Dmitry Medvedev. Although to criticize this program, Gennady Zyuganov pushed him with his questions. But he didn’t need it - even at the beginning of his speech, he emphasized that it was necessary to positively evaluate many things in the Soviet “inheritance”. And, as if emphasizing this, he repeated his thought several times, expressing it in different words.

Point four - the country's defense. Russia, as we know, has long been in the ring of fronts, and Vladimir Putin explained how we will deter potential enemies, despite the imminent prospect of living in the “harmonious space of economies from Lisbon to Vladivostok”. For this, the state defense order system will be changed, the military industrial complex will be reformed, the production of rocket systems will be doubled, the navy will be fully updated (the United Shipbuilding Corporation, headed by Deputy Prime Minister Igor Sechin, will probably be responsible for building).

Finally, the fifth point is social obligations. Both Vladimir Putin and United Russia (this was confirmed by Boris Gryzlov) are in no way going to refuse. On the contrary, judging by the statement of the prime minister, they will only increase and, according to the forecasts of many economists, an increasingly heavy burden will fall on the Russian budget. And all this because, as has already been said, it is a question of the electoral program.

So, five points of Vladimir Putin's election program: 10 years without change; diversification of the economy (taking into account the interests of the power industry), continuity in relation to the USSR, increased defense spending and a further increase in various kinds of social benefits. And, apparently, these points are not consistent with even the most accurate program of modernization of Russia. No matter how much presidential aide Arkady Dvorkovich assured the “most respectable public” that the premier “image of the future” is also a report on the fulfillment by the government of President Dmitry Medvedev’s instructions.