Without coal and gasoline 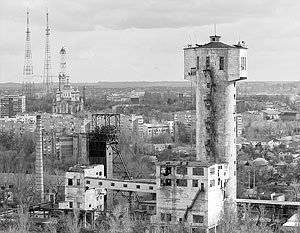 Ukraine's economy is waiting for collapse and complete restructuring, if the rebellious Donetsk, Kharkov and Lugansk prefer the Crimean scenario. But joining Russia will help bring the industrial potential of Donbass to a qualitatively new level, and the South-East of Ukraine will be able to become a donor for the Russian budget much faster than the Crimea.


Recent events in the South-East of Ukraine show that at least three regions: Donetsk, Kharkiv and Lugansk regions - may prefer to go according to the Crimean scenario and join the Russian Federation. The possible consequences of the implementation of this scenario could be even more catastrophic for the Ukrainian economy than the default expected in the country.

Suffice it to say that, according to official statistics of Ukraine for 2012 a year (later data was not published), these three southeastern regions of Ukraine account for more than 21% of the country's total GDP. Thus, together with the Crimea, Ukraine will lose almost a quarter of its economy.

Donbass is still the most economically developed region, including thanks to minerals. Here are the largest enterprises of the coal mining, military, metallurgical and chemical industries, the rocket and space industry, aircraft manufacturing, shipbuilding and ship repair, as well as Ukrainian refineries. It is not by chance that experts and officials themselves admit that Southeast is the main breadwinner of Western Ukraine.

Donetsk region is the second after Kyiv on welfare region of Ukraine. The region's GRP in 2012 amounted to 170,8 billion UAH, or 11,7% of the total Ukrainian economy.

Kharkiv and Luhansk regions are lagging behind, however, they are among the ten largest regions of Ukraine and provide 5,6% and 4% of the country's economy. GRP of the Kharkiv region is two times less than the Donetsk GRP - 82,2 billion hryvnia. The economy of the Luhansk region is almost three times less - 58,8 billion hryvnia (comparable to the economy of the Lviv region).

If these three regions follow the path of the Crimea, then the rest of Ukraine will not be sweet. “In case of separation of these regions, Ukraine loses a powerful industrial cluster and important raw materials bases. Coal reserves exist in the Lviv-Volyn basin, small deposits of oil and natural gas exist in the Carpathian region and in the north-east of the republic. But with the loss of Donbass their resources, most likely, will not be enough, ”says Dmitry Kravchenko, chairman of the presidium of the Association of Young Entrepreneurs of Russia.

In addition to the developed industry, Donbass has a favorable geographical position at the intersection of important transport routes: the region has one of the densest railway networks in Ukraine, the expert adds.

Given that Ukraine is now in a pre-default state, and debts for gas have already grown to 2,2 billion dollars, the loss of nursing regions is a terrible blow. The Ukrainian economy will have to completely restructure. Over time, the socio-economic situation, of course, should improve, but the path to this will be extremely thorny and long. And the Ukrainians can only blame Maidan, European integration and the current authorities of the country, who illegally seized power in the country and lead it to collapse. For the rest of Ukraine, this would mean not just a loss of ties with Russia, but also a clear transformation into another appendage of Western Europe, which now represents the majority of the eastern and southern countries - members of the eurozone.

Donetsk region is distinguished by a developed mechanical engineering and metalworking, electric power industry and a powerful chemical complex. The share of the fuel industry and ferrous metallurgy is almost twice the national average.

Meanwhile, Donetsk in recent years due to the actions of the Ukrainian authorities (or rather even due to inaction) has turned into a subsidized region. According to the 2012 of the year, the subsidies from the center slightly exceed the budget receipts and are many times more than, for example, were transferred by Kiev to the same Crimea. However, this is a simple explanation. First, it is the industrial South-East, especially the Donetsk region, that accounts for the largest gas consumption. And the center is forced to subsidize the costs of mining and metallurgical companies. Unfortunately, it is precisely coal mining that pulls the region down and spoils profitability indicators, since the volume of investments in the coal industry exceeds the yield.

"The coal industry in the Donetsk region was subsidized because the technologies currently used there are mostly outdated," says Ivan Andrievsky, first vice president of the Russian Union of Engineers. The industrialists of Ukraine are now practically in distress, but joining the EU is unlikely to solve their problems in the coming years, he adds.

The Kharkiv region, in contrast to the Donetsk region, by all indicators remains the region that feeds Ukraine. In the first half of 2013, the region transferred billion hryvnias to the budget of 10,38, and received almost three times less in the form of subsidies - 3,48 billion hryvnias. This is explained by the fact that there are more than 40 oil and gas fields in the region. The volumes of energy resources extracted by Ukraine are, of course, not comparable with the Russian ones, but they are growing every year.

It was in the Kharkiv region that Shell wanted to find shale gas, although, besides environmental risks, there are also commercial ones: there may simply not be enough volume for production. This has already happened in Poland. And the very first shale well, drilled in the Pervomaisky district of the Kharkiv region by Shell, also did not meet expectations on reserves.

In addition to oil and gas production, the Kharkiv region is distinguished by a developed agricultural engineering and construction materials production.

Lugansk region, although it is subsidized, but can also boast a developed engineering, metalworking and food industry.

The industrially strong regions of Ukraine became subsidized in the absence of the necessary investments in industry in the last 20 years. Enterprises continue to operate solely thanks to the heritage and technologies of the Soviet past. And this means that the cost of gas and electricity from industry is still high compared with Russian enterprises. The energy intensity of the industry of the South-East is four times more than in the EU. Labor productivity was also not raised by anyone, and now its level is at least seven times lower than in the EU. Metallurgists of Ukraine continue to use open-hearth furnaces, which modern enterprises, including Russian, have long refused.

Many enterprises in these regions are competitors of Russian industry. However, their cooperation with Russia can bring a synergistic effect. Of course, when implementing the Crimean scenario in the same Donetsk, Russia will need huge investments, primarily in the modernization of the industry. However, they can pay off much faster than in the Crimea. These are general laws: infrastructure projects (the main costs in the Crimea for them) are more expensive and pay off longer than investing in mining and processing. If it will be possible, according to expert estimates, to turn the Crimea from a subsidized region into a self-sufficient region not earlier than five years later, Donetsk, with due regard to industry and investment, is able to become self-sufficient much faster.

“Donbass as a whole has significant potential for the creation of industrial zones, the development of an international trade system, transport corridors, and modern communication lines. Therefore, for Russia, of course, it would be a very attractive prospect to join these areas, ”says Kravchenko.

Potential joining of Donbass to Russia will raise the region to a qualitatively new level of development. It is possible and not to mention that the language problem and the threat of Ukrainization, NATO membership or the imposition of the OUN-UPA cult will disappear in these regions, as publicist Yuri Lukschits says.

The only possible problem from an economic point of view is the determination of the status of these territories by the world community. Private investors may be deterred, as in the situation with the Crimea. However, the Crimea has already shown that Russian investors are not shy, because they understand that political squabbles will eventually disappear, and Donbas needs investments today.
The example of Crimea is indicative. In addition to government investments, businessman Ruslan Baysarov (for example, the construction of the all-season ski resort Veduchi in the Chechen Republic) has already announced 12 billion rubles in the tourism complex of the Crimea. And the first Russian banks began to arrive in the place of the Ukrainian banking structures in the Crimea. According to the republic’s prime minister Sergei Aksenov, they have already offered to invest over a billion dollars in the Crimea.

Therefore, in the near future we should expect interest from the Russian companies and to the southeastern region, the industrial potential of which, coupled with large reserves of natural resources and developed infrastructure is obvious.