The third Stalinist blow. The liberation of Odessa. Part of 2


Simultaneously with the offensive of the forces of the left flank, the enemy of the right flank of the 3 of the Ukrainian Front successfully smashed the enemy. During the three-day stubborn fighting 57-I and 37-I army 28 March broke through the German defense on the right bank of the Southern Bug at the front in 45 km in depth to 25 km.

On March 29, the 28th Army was withdrawn to the reserve of the Supreme Command. Simultaneously with the liberation of Nikolaev, the troops of the left wing of the 3rd Ukrainian Front developed an offensive along the coast of Odessa. On March 30, the 5th shock army under the command of Grechkin, with the support of a landing force landed from the sea, crossed the Dnieper-Bug estuary and liberated the city of Ochakov. Airplanes of the 17th Air Army and the Black Sea fleetas far as possible and taking into account weather conditions, they supported the ground forces. Soviet aviation inflicted powerful blows on enemy retreating columns, destroyed transport hubs. Aviation also disrupted the evacuation of German troops by sea. Transport planes, trying to solve the problem of supplying troops in the conditions of spring thaw and off-road conditions, delivered fuel, ammunition and other cargoes by air. 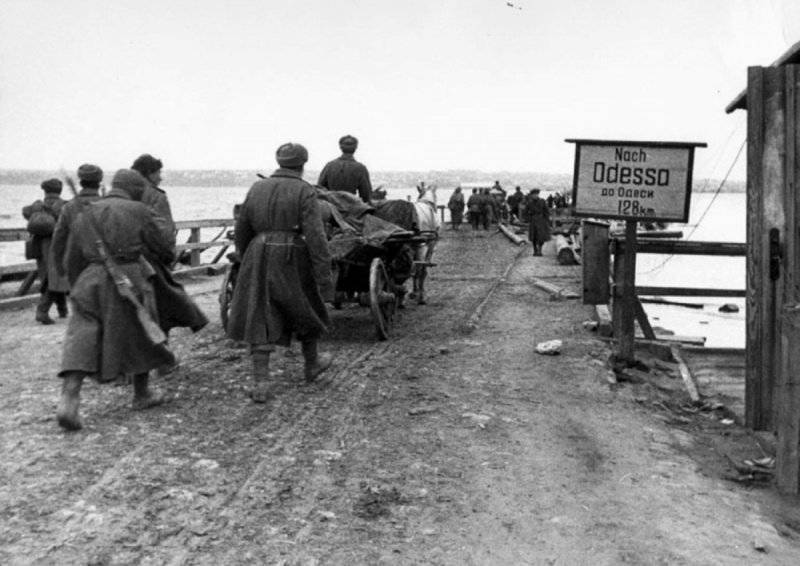 The German command, in the conditions of breaking through the defense on the left and right flanks, as well as the offensive of the troops of the 2nd Ukrainian Front (which created a threat to encircle the Nikolaev-Odessa grouping), began a hasty withdrawal of the main forces of the German 6th and Romanian 3rd armies across the Dniester River. At the same time, the Germans tried to detain the enemy at the intermediate line of the Tiligul River. However, the troops of the 57th and 37th armies, the 23rd Panzer Corps and Pliev's mechanized cavalry group broke through the German defenses. By the morning of March 30, the main forces of the mechanized cavalry group and the 23rd Panzer Corps completed the crossing of the Southern Bug near Aleksandrovka and Voznesensk. On March 31, overcoming the stubborn resistance of the enemy, Soviet troops began to pursue him in the direction of Razdelnaya. On this day, in the area of ​​the city of Voznesensk, the commander of the 4th Guards Mechanized Corps, Lieutenant General, was killed tank troops Trofim Ivanovich Tanaschishin. 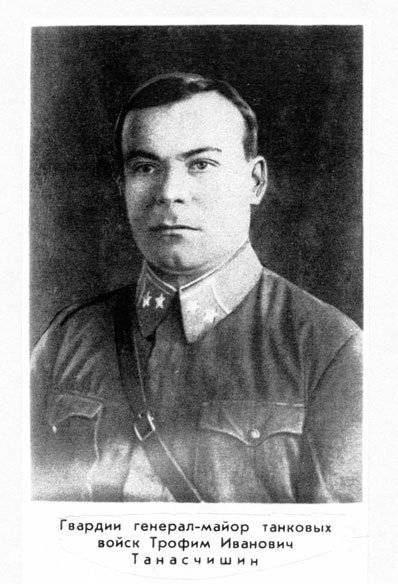 Already on April 4, parts of Pliev’s cavalry-mechanized group and the 37 Army Sharokhin cut the railway linking Odessa and Tiraspol and occupied the important railway junction Razdelnaya. As a result, the German group was divided into two groups. Combinations of 30 and 29 army corps of the 6 army (9 divisions and 2 assault gun brigades) under the onslaught of the armies of Sharokhin, Hagen and 23 of the Akhmanov tank corps rolled back to Tiraspol and beyond the Dniester. The rest of the 6 Army - the 17 X, 44 and 72 Army Corps units, the 3 Romanian Army formations (total 10 German and 2 Romanian divisions, 2 assault gun brigades, separate tank battalions and other units), and other units. retreated to Odessa. The troops of the 3 of the Ukrainian Front covered the German group from the north and north-west. Pinned them to Odessa. April 5 cavalry mechanized group broke through to Strasbourg (Kuchurgan), there was a threat of encirclement of the enemy's Odessa group.

The command of the front, in order to finally cut off the Germans' path of withdrawal beyond the Dniester, turned the horse-mechanized group from the Razdelnaya area to the south-east. 7 April, Soviet troops occupied Belyaevka and reached the Dniester Liman. The threat of a large “pot” has intensified. At the same time, units of the 8-th Guards and 6-th army bypassed Odessa from the north-west, and the 5-I shock army continued its advance along the coast of the sea.

In the area of ​​Odessa there were more than 6 enemy divisions. On the morning of April 6, they launched a counterblow in the Razdelnaya area, trying to break through to Tiraspol. The German troops attacked the 82 Infantry Corps of the 37 Army. The Soviet troops had not yet managed to create a solid defense, their artillery and rear were lagging behind. At the cost of significant losses, a part of the German troops was able to reach the crossings over the Kuchurgan River and joined up with their troops that operated north-west of Separate. The command of the 37 Army pulled up additional forces and organized a counter-offensive. In the second half of 7, April, the German troops, who did not manage to break through to their own, were driven back to the south and southeast of Razdelnaya. 57-I army continued the offensive that day, but part of the German troops managed to withdraw beyond the Dniester River.

In the evening of April 9, units of the 5 Shock Army commanded by Tsvetaeva captured the Sorting, Kyalnik, Peresyp stations and began the battle for the northern districts of Odessa. At the same time, the formations of the 8-th Guards and 6-th armies of Chuikov and Schlemin reached the city from the north-west. The German command tried to evacuate part of the troops, military materials and property by sea. However, it did not work out. German ships and transports were subjected to constant strikes by the 17 aircraft of the Air Force and the Black Sea Fleet, attacks by torpedo boats and submarines. In total, more than 30 enemy transports were sunk, others were damaged. Soviet bomber divisions also struck ships in the port of Odessa. Therefore, the German troops remained the only way of withdrawal - on Ovidiopol, followed by the forcing of the Dniester estuary. In this direction, began to divert the rear, transport and troops. Part of the German forces tried to break through Belyaevka. The retreating troops were constantly subjected to air strikes, suffered heavy losses.

10 April, the Soviet army, with the support of the Odessa partisans and underground fighters completely liberated the city from the Nazis. As the Germans themselves noted, during the two years of occupation, Odessa became a real stronghold of the partisan movement. Guerrillas and underground fighters came out of the dungeons and shelters and helped to clear Odessa from the enemy. In addition, they provided invaluable assistance in preventing the destruction of the port, berths, warehouses, important buildings and facilities that the Germans had prepared for demolition. Guerrillas Kuyalnik detachment under the leadership of L.F. Gorbel on the night of April 10 attacked the enemy's rear and destroyed the German team of bombers. The Germans planned to destroy the dam of the Khadzhibeevsky estuary and to flood it with the Pereyp, which opened the way for the Soviet troops to Odessa.

In Odessa, Soviet troops captured huge trophies that the Germans did not have time to evacuate. The entire railway from the Vygoda station to the city itself was packed with wagons with military equipment, various equipment and stolen property. 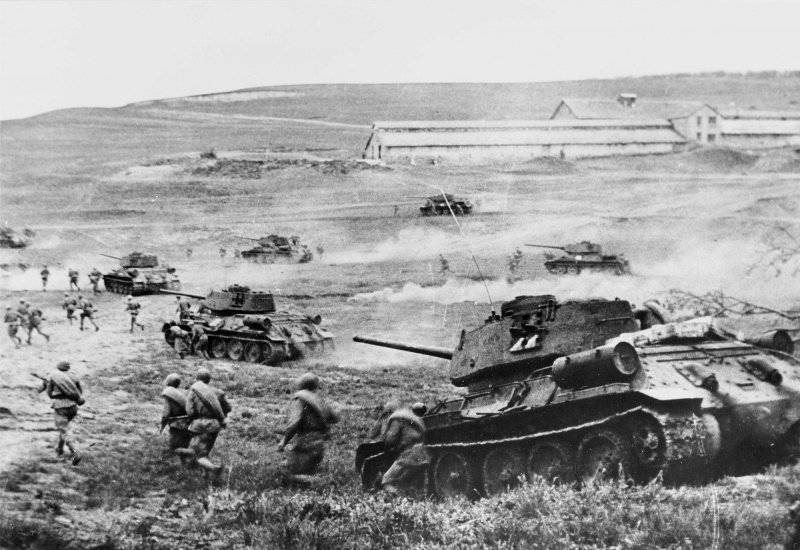 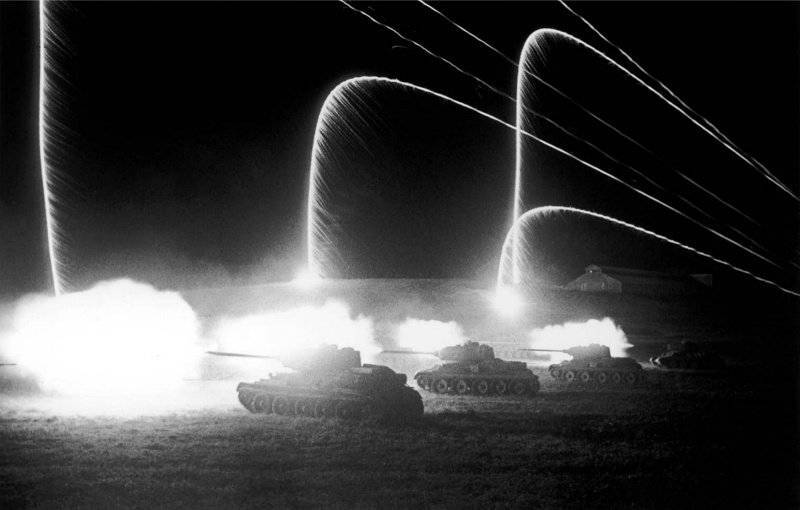 Capture the left bank of the Dniester

After the liberation of Odessa, the 6-I and 5-I shock armies were withdrawn to the second echelon of the front. The rest of the army of the front continued the offensive and the pursuit of enemy troops. At the same time, the 23 Tank Corps 10 of April was so wedged in the enemy’s battle formations that it was surrounded in the Ploskoye area. Tankers fought in an environment until the 11 units of the 57 Army arrived there on April 12. On April XNUMX, units of the Hagen army reached the Dniester, forced the river along the way and captured small bridgeheads on the right bank.

At the same time, the 37 army units of Sharokhin reached Tiraspol and on the night of April 12 liberated him from the Nazis. Soviet troops also captured a small bridgehead southwest of the city, up to 2 km along the front and up to 1,5 km in depth. Pretty quickly, the bridgehead was increased along the front to 16 km and in depth from 6 to 10 km.

At the same time, the 8-I Chuikov Guards Army and Pliev's horse-mechanized group, breaking down the resistance of the enemy, were advancing on the Ovidiopol direction. However, part of the cavalry-mechanized group (10-I Guards and 30-I cavalry divisions) was in a difficult position. To the north of Ovidiopol, the Soviet divisions came under the blow of the retreating Odessa enemy grouping and, under the pressure of superior enemy forces, were forced to retreat to the north. The two-hull orders of the 60 Guards Army, which were stretched over the 8-kilometer front, could not reliably block the German troops from withdrawing to the west. Vasilevsky criticized the actions of the command of the 8 Guards Army, because of which the German troops were able to quietly leave the Dniester.

The 46-I army advancing to the north by the end of 11 April reached the Dniester in the area south of Chebruchi. April 12 advanced army battalions forced the Dniester. 8-th Guards Army 14 April reached the Dniester estuary and cleared its coast from the enemy. On the night of April 15, units of the 74 th Guards Rifle Division forced the Dniester near Ilyichevka (near Belyaevka). The further advance of the armies of the 3 of the Ukrainian Front was stopped by the Stavka, which on April 14 ordered to go on the defensive on the achieved lines. It was necessary to recuperate, tighten the backward rear forces, replenish the units with people, bring up ammunition and fuel. 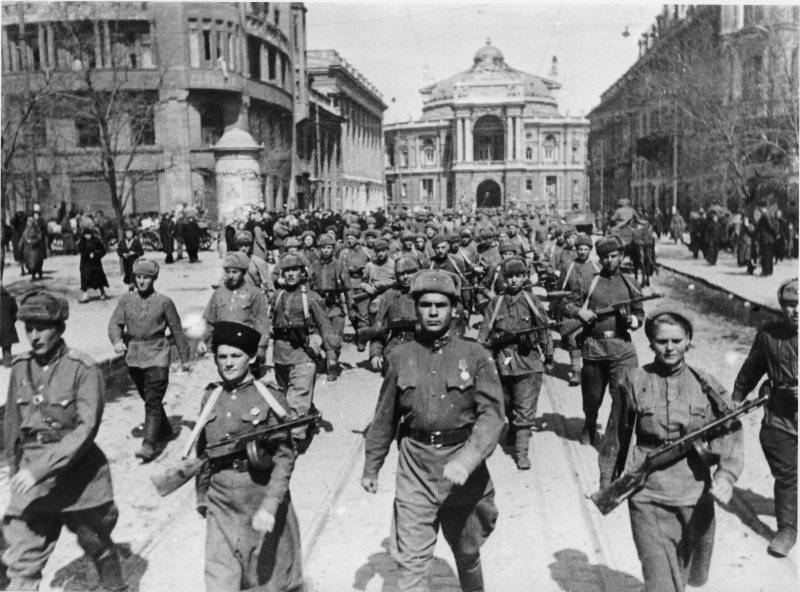 The operation ended with a complete victory for the Red Army. The troops of the 3 of the Ukrainian Front, supported by the left flank of the 2 of the Ukrainian Front and the Black Sea Fleet, defeated the German 6 and 3 of the Romanian armies. German troops lost more than 38 thousand people killed and captured. More than 950 guns were seized, around 100 ammunition and food depots, as well as a large number of other property and equipment.

Soviet troops advanced to 180 km and liberated Nikolaev and Odessa regions from the German-Romanian troops. Also released most of Moldova. Many parts and compounds that distinguished themselves in the operation were awarded orders. 42 units received honorary titles ("Nikolaevskii", "Razdelnenskie", "Odessa" and "Ochakovskaya"). At the same time, the troops of the 3 of the Ukrainian Front did not manage to encircle and destroy most of the forces of the German 6 and 3 Romanian armies, thereby succeeding in retreating to the right bank of the Dniester and organizing a steady defense at this turn. Therefore, the Soviet troops could not reach the state border of Romania.

The return of Nikolayev and Odessa allowed the Black Sea Fleet to rebuild its bases in the northwestern part of the Black Sea basin and relocate light ships and aircraft there. As a result of the blockade of the Crimean grouping of the enemy seriously strengthened. Crimea was already surrounded by land. The seizure of bridgeheads on the Dniester created the conditions for the further advance of the armies of the 3 of the Ukrainian Front. Next in line were the remainder of Moldavia, Romania, and the Balkan Peninsula. 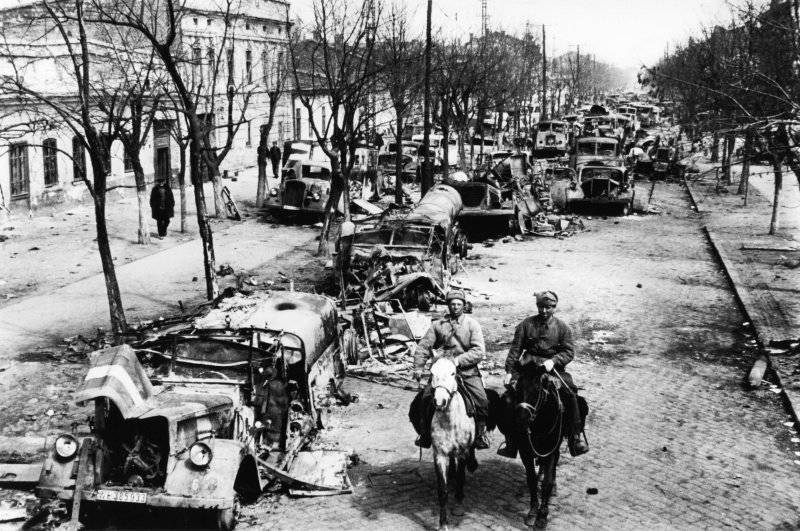 Soviet soldiers traveling on the streets of liberated Odessa. The street is crammed with equipment abandoned by the Germans.