Unexpectedly: economic sanctions as a justification for the lethargy of domestic state economists

April 11 2014
83
After the reunification of the Crimea and Sevastopol with Russia, they began to actively discuss not only the political nuances of this process, but also its economic impact on the financial system of the Russian Federation. A circle of people who are happy to share horror stories with the masses that the Republic of Crimea and the city of federal subordination Sevastopol will “devour” a considerable part of the Russian budget was determined, hitting the growth rate of the Russian economy. From such horror stories, many really became bad, judging by the discussions in the press and in social networks, salary, fresh air and even psychologist consultations were needed ...


A reunion will “strike at growth rates”? .. It’s really scary, but only in one case: if you don’t know what growth rates our economy has completed with 2013. If someone has forgotten, it must be recalled that following the results of last year, the Russian economic system added "as much" 1,3% ... And, as far as I remember, in the 2013 year, our country did not increase at all with new territorial units.

In this regard, talks about the fact that the entry of two new subjects into Russia will lead to horrific consequences for the Russian economy are more like attempts to justify far from the most outstanding in the successful direction the steps of state economists. Moreover, they are determined to conduct a kind of justifiable policy of themselves and these same state economists.

Thus, the International Monetary Fund has published information, according to which the growth rate of the Russian economy and at the end of the current year will be 1,3%. State economists openly say in true modesty that they will not pull 1,3%. Like, Ukrainian events, the Crimea, Western sanctions and all that. It is said that if pulled, then only an increase in 1,1% and then with the addition of a mass of favorable conditions. Otherwise, 0,5% does. That is the forecast from the Ministry of Economic Development for 2014 year. 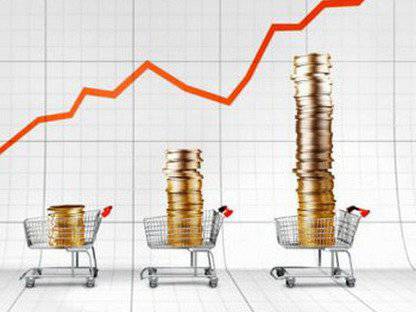 One of the main conditions for the state economists designated 1,1% of Russian growth to be pulled is the repeal (modification) of the so-called budget rule. At the same time, Andrei Klepach, deputy head of the Ministry of Economic Development, speaks golden words:

If we have growth rates near zero, it is obvious that we need to do something.

And you can't argue with this ingenious phrase. As the saying goes: who's stopping? Poke your finger. To do something “really necessary,” and it is gratifying that such an idea has occurred to the employees of the economic segment of the cabinet of ministers. Somewhat strange is that it comes only today, when almost a third of the year is already behind. It is also strange that no one in the ministry had any thoughts on “whether to take up work” even when, instead of 2012 predicted at the end of 3,5% of growth, the economy at the end of 2013 produced only 1,3 percent. Solid oddities ...

But now, at least, there is a weighty excuse: everything would be much better if it were not for the “damned” Ukraine and not this fiction of the Washington White House ... With such arguments, manage the economy, judging by everything, where it is more convenient. After all, in the case of even a small increase, you can declare that, say, the cabinet of ministers, overcoming enormous external pressure, nevertheless led Russia to economic advantages. Well, and if growth does not take place, so the Russians will understand, forgive - we are not guilty - sanctions, you know ...

In the same Ministry of Economic Development already now, as if justifying the unintelligible economic results in the country, they say: capital outflows can amount to 150 billion dollars, inflation - 6%, and this will not allow the economy to grow more or less actively. For comparison: the average outflow in 2008-2011 was $ 76 billion, in 2012 - about $ 57 billion, in 2013 - $ 62,7 billion - Central Bank data, $ 80,5 - data from so-called independent economic institutions.

That is, it turns out that the outflow of Russian capital from the country this year may be twice as large as the outflow during the peak years of the crisis of 2008-2010. And this at a time when the West, as it turned out, “already” applied two whole packages of economic sanctions against us ... (The third package is going to be applied if, quote: "Russia will act in the south-east of Ukraine in the same way as it acted in the Crimea"). Does it need to be understood that for reunification with the Crimea we are already, as they say, punished with “two packages”? And is it necessary, based on the forecasts of the Ministry of Economic Development, to understand that the Ministry of Economic Development itself “relies” on these sanctions more than those who introduce them against Russia?

Well, in fact, what prevents the economic government sector from gathering its strength, and now due to the difficult economic situation and political turmoil at the borders of Russia to impose control over capital outflows, as has been done in a number of East Asian countries for a long time? If it is not possible to introduce such control, then it is more than suspicious. It is also suspicious that, for any reason related to the negative in the Russian economy, it has now become fashionable to nod either to reunion with the Crimea, or to the worried Donbass, or to the clearly not accented “sanction packages” from the EU.

By the way, one of those state officials who oppose and modify the budget rule, and any changes in economic policy in general today is none other than Anton Siluanov - Minister of Finance. According to Mr. Siluanov, active actions in the economy today may scare off investors.

And here is a strange logic: when the representatives of the economic sector of the government of the Russian Federation themselves give forecasts for economic growth even lower than the IMF forecast, it turns out that investors are not afraid of Russia, but the actions aimed at stimulating the economy by the government, why they should be scared away ... So if an internal or external investor is worried that a quality barrier will be put to his uncontrolled withdrawal of capital from Russia, then we are such an investor, as they say, and not for nothing, and not money with it ... For such "investors" in the Criminal Code there is a special concept - "fraudsters".

Ctrl Enter
Noticed oshЫbku Highlight text and press. Ctrl + Enter
We are
Herostratum art of Ukraine. Psychologist commentSituational analysis of the death of the MH17 flight (Malaysian Boeing 777), made on the basis of engineering analysis from 15.08.2014
Military Reviewin Yandex News
Military Reviewin Google News
83 comments
Information
Dear reader, to leave comments on the publication, you must sign in.