April 11 2014
143
17 March 1991 of the year. All-Union referendum. The first and last plebiscite of the times of the USSR, during which Soviet citizens (citizens of the republics remaining at that time, or rather, those of them that did not boycott the fact of the will of the people) were asked to answer the question about the future fate of the state. The only question that was put to the national vote was as follows (for some republican nuances):

Do you consider it necessary to preserve the Union of Soviet Socialist Republics as a renewed federation of equal sovereign republics, in which the rights and freedoms of a person of any nationality will be fully guaranteed.

The bulletin offered two answers to this question: “yes” and “no”.

It would seem that the leadership of the Soviet Union, as well as the leaderships of its individual republics that took part in the referendum (the All-Union plebiscite did not conduct the Baltic republics, Georgia, Armenia and Moldova without Gagauzia and Transnistria), received a clear and unequivocal signal from the people, indicating that The overwhelming majority of Soviet citizens support the preservation of the USSR as a single federal state. It was not only a signal from citizens, but also a full-fledged legal basis for preserving the country.

However, what happened next, and what we know perfectly well today, defies any legal interpretation. What are the results of the will of the Soviet citizens? What are the legal norms? They just trampled. Trampled without a twinge of conscience. Trampled only because the preservation of a single state did not meet the interests of people who so tried to please at that time the state leadership. 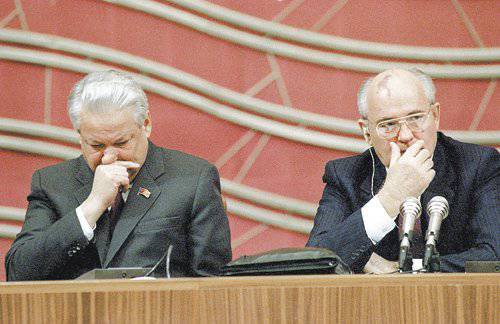 Since then, more than 23 years have passed. And all these years in the minds of the majority of people in the most different ex-republics of the Union, the thought soared: what kind of international law, what kind of democracy can we talk about when the so-called “world community” in 1991 happily applauded the process of dismantling the state, whose people were in favor of save it! And the stormy, never-ending applause, turning into a standing ovation, we observed, first of all, in the performance of our own leaders, who did everything to spread the state into pieces, giving birth to bloody porridge instead, which in some regions continues to boil up to now. The tectonic waves in 1991 had such power that, in fact, 23 a year later, the process did not, in fact, stop. One of these leaders, who is also the chief head of the state of the times described, is alive and has the opportunity to observe with his own eyes how, in particular, the pseudo-democratic policies that he once professed in his time today lead to incessant chaos. Ukraine is the clearest example.

The theme of the criminal actions of the then authorities, who did not care about the opinion of the people and the letter of domestic and international law, has been exaggerated more than once over the past years. Both in 1991, and in 1995. With new force, this issue is being discussed today. Literally the other day, State Duma deputies directly from three parliamentary factions (“United Russia” - Yevgeny Fedorov and Anton Romanov, the Communist Party of the Russian Federation - Oleg Denisenko, Ivan Nikitchuk, and the Liberal Democratic Party - Mikhail Degtyaryov) sent a request to the Prosecutor General’s Office of the Russian Federation demanding a prosecutor’s check of the actions of the Soviet leadership during the collapse of the USSR. A separate segment of the request is the verification of the actions of the USSR President Mikhail Gorbachev, against whom a criminal case was opened in November of 1991 in the Soviet Union, which was closed under the pressure of Gorbachev himself.

One of the points of inquiry is the verification of the legitimacy of the decisions adopted by the so-called USSR State Council on recognizing the independence of the Baltic republics. Although it is clear that there is nothing special to check here, because the very existence of such a body as the State Council was not provided for by the Soviet Constitution, which means there could be no question of the legitimacy of the decisions taken in this body.

So, five State Duma deputies actually call on the Prosecutor General’s Office, using all the documents at their disposal, to recognize the activities of the Soviet authorities in the 1990-1991 years as criminal, with outright state separatism.

Immediately after such a parliamentary initiative, the public, as they say, stood on opposite sides of the barricades. People who are still unable to come to terms with the fact that in 1991, the authorities actually betrayed them, that the country was torn to pieces with simultaneous spitting into legal norms, they recognize that the moment is long overdue when 23 events of old should be given a clear interpretation . Although it is 23-year old, it is unlikely that crimes of such a serious scale can have a statute of limitations at all. After seven decades, Nazi criminals continue to be “caught” in various countries of the world and brought to justice. And the USSR authorities of the 1991 model of the year were so damaged in the country that even the mentioned Nazi criminals could envy them ...

On the other side of the barricades were people who say that, they say, Russian deputies need to get involved in urgent matters and look for a more serious activity for themselves. They say that once again they are trying to push their own inconsistency onto previous generations, trying to denigrate such a wonderful person, Democrat, author of publicity, perestroika and pluralism of Mikhail Sergeyevich Gorbachev.

One can hardly agree with such a judgment. Yes, of course, the legislators have enough urgent worries, but at the same time, the seriousness of the issue under consideration cannot be underestimated. It is strange to hear the opinions of people of this kind: they say, where would these deputies be today, if not for Gorbachev; Could journalists openly publish their opinions if, again, not Gorbachev? They say Gorbachev is generally a democracy's beacon ...

Strange, because it was the then Soviet leaders like Gorbachev who were the first to declare their indisputable democracy and support for publicity, and in 1991, they were the first to trample on the fundamentals of democracy, crushed publicity - at least in terms of the actual results of the All-Union referendum. The citizens said “yes”, and the citizens were answered: “no” ...

In the end, “democracy” and “publicity” in the Gorbachev period were not at all reduced to democracy and publicity in the encyclopaedic meaning of these concepts, but to turning entrenched judgments upside down. Everything positive in the model of the functioning of the USSR suddenly became negative - simply and even clumsy, and everything that somehow touched the Western point of view became known as a new, exceptionally correct course leading the country to a bright capitalist future. Black became white, white became black - the middle is not given. No objective approach, no sound analysis of the situation. Everything that does not satisfy the values ​​of Washington and London, was instantly dismissed, being replaced by the "good" of humanitarian aid leading us to "capitalism." The opinion of 150 of millions of Soviet citizens suddenly became cheaper than the darned American jeans and German gum, cheaper than the smirks of Western leaders.

Gorbachev, Yeltsin, Kravchuk, Shushkevich, Shevardnadze and other democracies gave us, it turns out, they donated ... Publicity ... And then themselves, are they about democracy with publicity wiped their legs? Well, they themselves have equated the people with cattle, for which the trio can solve everything under a flask of vodka and a snack of fried boar? 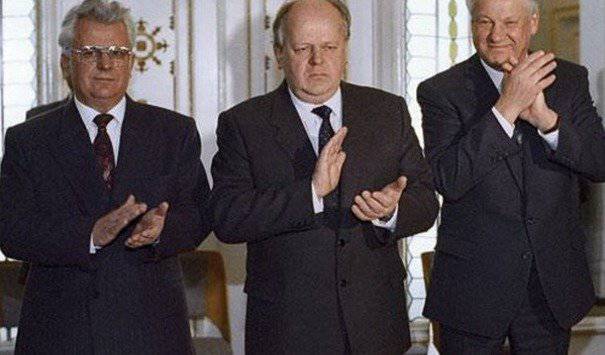 Or is democracy a thing so flexible that its use varies from moods overseas? Over the years, we managed to learn that after all it is precisely there that a “focal point” of DEMOCRACY is located, which makes decisions and lowers them in the form of “WG” to its puppets on the ground: this referendum must be recognized, this referendum - God forbid, here you can do without referendums - “People shavayet” ...

If people committed a crime that today leads to hundreds, or even thousands of victims (if not counting the multimillion demographic hole in which the republic collapsed by the hands of several people of the state fell into), to a horrific scale of economic negativity, then such people should suffer punishment. And the main punishment is the truth. The truth is in the textbooks storiesThe truth is in the media - the truth that representatives of the younger generation should also know, in order not to repeat these fatal crimes in the future.

PS At the request of the State Duma deputies to the Prosecutor General’s Office, Gorbachev himself quickly responded, having long since chosen for himself the limits of a completely different state:

Of course, this (talking about the parliamentary initiative - note "IN") is a hasty and hasty decision. What else can you comment?

Then you need to collect all the old Duma (it seems, about the Supreme Council - approx. "IN"), which voted for the collapse of the USSR, put everyone in the cars and send them to explore the expanses of the Sea of ​​Okhotsk.
-
said the last leader of the USSR in a blitz interview with ITAR-TASS.

Well, why the decision is hasty, Mikhail Sergeyevich? 23 of the year - quite enough time to deal with those who sowed chaos, who in the former USSR walks to this day ...

And further. Mikhail Gorbachev sold outright and in general offered to dissolve the State Duma for such an attitude towards his beloved. So, this time the Duma exactly worked in the right direction ...

Ctrl Enter
Noticed oshЫbku Highlight text and press. Ctrl + Enter
We are
The West opposes the people's will in the Crimea and is preparing sanctions for RussiaThe program An-148: when slowly harness ...
Military Reviewin Yandex News
Military Reviewin Google News
143 comments
Information
Dear reader, to leave comments on the publication, you must sign in.