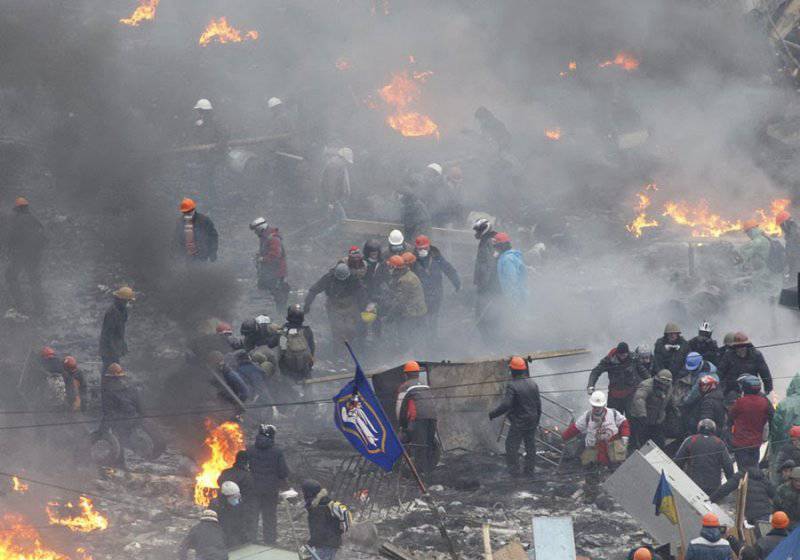 9 April Russia put forward an ultimatum to the Ukrainian authorities, which they tried to overlook in Kiev. The meeting of the Russian government with the participation of Vladimir Putin was broadcast on Russian television in full, which is uncharacteristic of our northern neighbor. The essence of the ultimatum was as follows: prepayment in full for gas at the price of almost $ 500, preparation for import substitution of Ukrainian products and presentation of a bill to Kiev in the amount of $ 16,6 billion. And Vladimir Vladimirovich's key phrase: “Let's not switch to the advance payment for gas, I hope that during this time the temporary authority in Ukraine will not do anything irreparable. ”

Probably, everyone understood what it means, given the situation in the south-east of the country. Under the "irreparable actions" refers to the assault on the buildings of the Donetsk Regional Administration and the Lugansk Security Service, captured by the rebels on April 6. The Russian president has more than made it clear that immediate retaliation will follow, which, to put it mildly, will hurt the country's economy. Not a single dollar from the promised multibillion-dollar assistance from the EU and the USA came to Ukraine, the IMF completely excluded Kiev from its macroeconomic forecast, because in conditions of instability there is nothing to predict, and the Russian Federation continues to subsidize the Ukrainian economy. If, as promised. Minister of the Interior Arsen Avakov, during 48 hours “the problem of the eastern regions will be solved”, then the full economic beaver (or arctic fox) will come.

In principle, Putin’s message is more addressed to the United States than to the puppet regime in Kiev. The following algorithm for solving the problem is proposed: there will be no military invasion - this time. Secondly, the quadripartite negotiations on the future fate of the country in the format of "EU - USA - Russia - Ukraine" should begin. At the same time, Moscow insists that the southeast at the talks should be represented not by a temporary authority, but by real leaders of the protest movement. The purpose of the negotiations is to carry out a constitutional reform that provides for (at a minimum) the introduction of a federal form of government and the provision of state status for the Russian language.

Negotiations should begin next week, where it is not yet clear. The list of participants is also not defined. The State Department has already managed to sharply oppose the inclusion of “separatist leaders of the south-east” in the negotiation process. The temporary government in Ukraine pretends that everything is in order, the situation is under control, nothing happens at all, and the troops are put on an even greater alert. The well-known foreign ministry troll Yevgeny Perebey is incomprehensible that with a monstrous effort of will he restrained his traditionally stupid humor regarding the Russian Federation and squeezed something like the following through his oral opening: ".

That is, no informal leaders, only "heroes of Maidan." The PR faction in the Rada (it turns out it still exists) offered its services as “intermediaries of the southeast”. I quote: “The Party of Regions in 8 of the south-eastern regions of Ukraine has representation in local councils, as well as the largest faction in the Ukrainian parliament. Therefore, it has reason to propose as a negotiator Mikhail Dobkin, who won the primaries at the PR congress and is a candidate for the presidency from the Party of Regions. ” It is quite clear that the west of the country will not agree with this proposal, where the PR in general and Dobkin in particular are not even considered as people. The position of the Russian Federation on Dobkin is not clear.

Thus, in the next few days, we will have a powerful geopolitical drama. If events develop in a negative scenario, then something like this will happen. On the night from Thursday to Friday, cleaning of administrative buildings will begin in Donetsk and Lugansk. There will be victims. In response, the Russian Federation will lower the “iron curtain” on the border with Ukraine. Economic. Gas supply to Ukraine will stop. Kiev, as it was repeatedly during the premiership of Yulia Tymoshenko, will begin to stupidly steal transit “European gas”. A scandal will begin, because the resources of the alternative gas pipeline are not enough to meet the needs of the European Union. Naturally, the most painful war for energy will hit Ukraine. I even find it hard to imagine where the hryvnia will fall against the dollar. It is already ahead of the rise in air temperature. After the blood is shed, an uprising will begin in the southeast. Economic motives will be added to the political motives of the uprising. The enterprises of metallurgical and chemical complexes will stop. People will be on the street without any prospects. The election of the new president will finally lose any meaning, because finally everyone will know what the true price of Russian sales markets and Russian gas is.

Well, tell me, please, how long will the central government last in such conditions? The only relatively legitimate body of the state in these circumstances is the parliament. His work has been de facto blocked, as evidenced by the non-voting for Yulia Tymoshenko’s openly PR bills on the creation of an Anti-Corruption Bureau, lustration of government officials and the fight against corruption by recording conversations with officials of audio and video equipment. Communists, after the "Right Sector" set fire to their office in Kiev, refused to take part in the work of BP. "Regionals" too. Anyone there comes from the PR, who created two factions with idiotic names, waiting, fearing to get on the head (in the truest sense of the word).

Ukraine will become a zone of permanent instability. Returned boomerang, launched Maidan last year. Everything happens to the point of detail: the construction of barricades (much more accurate and massive), the seizure of administrative buildings, permanent protest actions, clashes with the police brought from the western regions, and the expectation of an assault. Only instead of the United States and the EU, which are openly pushing the militants of “euromaidan” to active actions and constantly warning the official authorities about the inadmissibility of military actions, - the ultimatum of the Russian Federation. Plus, there is an economic collapse. Under these conditions, the acting head of the Presidential Administration, Mr. Pashinsky, should immediately go fishing at the weekend. Other prominent representatives of the interim regime may follow his example. It is possible that the power of Kiev will try to pull time, promising some security guarantees to the rebels who seized the administrative building. However, this sop will not have any special significance. As long as federalism is equated with separatism, there will be no way out of a long and dark tunnel.

Ctrl Enter
Noticed oshЫbku Highlight text and press. Ctrl + Enter
We are
A great interview with Sergey Lavrov: about Ukraine, Obama and IranWhat you didn't want to know about England
Military Reviewin Yandex News
Military Reviewin Google News
188 comments
Information
Dear reader, to leave comments on the publication, you must sign in.