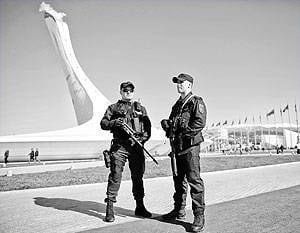 The terrorists planned to make several attacks during the Olympic Games in Sochi. According to the director of the FSB, Alexander Bortnikov, the Russian special services, together with colleagues from other countries, were able to prevent them. A veteran of the Alpha unit believes that the danger was really great, and the special services worked to the limit.


On Wednesday in Sochi, a meeting of the heads of special services with the participation of 79 delegations from 55 states and three international organizations.

“The experience of Turin was used”

In his speech, the head of the FSB of Russia, Alexander Bortnikov, said that in preparation for holding the Winter Olympic Games - 2014, an attempt to carry out terrorist attacks on Olympic venues was prevented. The victims and other consequences were largely avoided due to the “partnership cooperation of the Russian special services with the special services of other countries”.

“An example of this is the concrete joint work of the FSB of Russia with colleagues from the United States, Austria, France, Germany and Georgia against a group of individuals intending to carry out terrorist attacks on Olympic facilities in Sochi. By joint actions this threat was localized, ”he said.

According to RIA "News", In turn, Interior Minister Vladimir Kolokoltsev noted that at least 40 thousand police and military personnel of the internal troops took part in ensuring the security of the Games in Sochi. “At the same time, all available opportunities were used, including small Aviation, cynological service, divers for the safety of the water area, ”he said.

The Minister stressed that during the preparation for the Games, he studied all the advanced foreign experience in conducting similar events, such as the Winter Games in Turin and Vancouver, the Summer Olympics in London, the World University Games, the 2012 World Cup. “As a result, Turin’s experience in preparing the necessary planning documents, the so-called road maps, was partially used,” Kolokoltsev said.

And from the experience of the Canadian special services, the principle of zoning the territories of Olympic facilities, the optimal placement of check points for accreditations, the placement of fences and barriers in the mountain cluster was applied. They used Russian law enforcement officers and their own work, in particular, in the system of inspection of fans.

As the vice-president of the Alfa Special Forces Veterans Association, Aleksey Filatov, told VZGLYAD, the FSB has been doing very serious work to prevent terrorist attacks in the last six months. “Unfortunately, not all succeeded. At the end of last year, explosions thundered in Volgograd and Pyatigorsk ... Everyone understood that the time of the Olympics was the sweetest time for possible terrorist attacks, from the point of view of terrorists. It was at this time that they received special funding, especially preparing. The attacks that would have occurred during the Games would have led to very serious image losses for our country. Therefore, the task was no matter what 100% at this time to clear the space from carrying out the attacks, ”said the expert.

And in general, it was possible: “The fact that there were no terrorist attacks during the Olympics, although the leaders of a number of groups acted with threats, shows that our security forces are on the right path, they are able to provide security for 100% for a certain period of time”.

At the same time, he said, the staff of the FSB and other special forces worked to the limit of physical and psychological forces. “With the neutralization of Umarov, I think it will become easier to work,” noted Filatov. - After the liquidation of Basayev, Maskhadov, Umarov, in my opinion, the era of "natural terrorism" ended. Now we are increasingly seeing manifestations of not so much large-scale international terrorism, which sets itself the ideological and political goals of uniting several republics into a single “Emirate of the Caucasus”, etc., as the actions of individual criminal groups related to economic squabbles, extortion. ” he added.

Do not give terrorists "legal loopholes"

At the meeting, Bortnikov also said that terrorism is today a transnational criminal phenomenon. Only in 2013, more than 70 countries experienced the results of such attacks. And intransigence in the fight against this phenomenon "turned Russia into one of the main targets of the bandits." Under the leadership of the National Anti-Terrorism Committee (NAK), a number of successful operations were carried out in Russia in the autumn and winter, 28 prevented crimes of a terrorist orientation, including the leader of a gang underground in the North Caucasus, Doku Umarov was neutralized.

But the special services are not going to stop there. The head of the FSB called for improving the legislation in order not to give the terrorists the slightest “legal loophole”. Thus, "taking into account the events in Syria on the initiative of the FSB, the Russian criminal legislation introduced rules establishing harsh penalties for training in militant camps, as well as for creating and organizing the activities of terrorist structures."

In addition, Bortnikov noted that the gangs in Syria, the Afghan-Pakistani zone and Africa intensified and strengthened the combat potential at the expense of new adherents of radical Islam. Despite the decline in the activity of the Al-Qaida core, the gangster groups associated with it demonstrate the ability to act autonomously and aggressively, as they show in Syria and throughout the Middle East. New adherents of radical Islam from Europe, Central Asia, Transcaucasia and Russia are joining the ranks of the local bandit undergrounds.

The Taliban, the Islamic Party of Turkestan and the Taliban Movement of Pakistan are strengthening their capacities in the Afghan-Pakistani zone. And in connection with the upcoming withdrawal from Afghanistan of the forces of the international coalition, this danger is even increasing.

Finally, militant migration from North Africa to the central and southern regions of the continent is recorded. In this they are supported by Al-Qaeda in the countries of the Islamic Maghreb, the Movement for Monotheism and Jihad in West Africa, the Nigerian Boko Haram and the Somali Al-Shabab al-Mujahadin.

The FSB has suggested that the special services of other countries develop common approaches to assessing the threat of terrorism. One of such norms, according to Bortnikov, could be securing the priority of preventing terrorist attacks over responding to already committed ones. Bortnikov also announced the increased use of non-cash payments by terrorists in circumvention of official banking structures.

Note that Russian President Vladimir Putin, in his welcoming speech at the meeting, stated the need to respond strictly to the spread of propaganda of violence, extremism, ideas of national, religious and social intolerance, including in the global information environment, adds Interfax.

We add that on the eve of Bortnikov said that in the first quarter of 2014, 36 counterterrorism operations were conducted. Among the significant results - 19 terrorist attacks were prevented, 13 leaders and 65 members of gangs were eliminated. At the same time, the security services did not allow the activation of gangs in Russia. Resonant terrorist attacks of the end of last year were uncovered in Volgograd and Pyatigorsk.