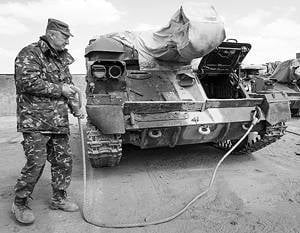 Russia has almost completed the export of Ukrainian tracked and wheeled vehicles from the Crimea, and negotiations are continuing on the return of 70 order to the Ukrainian Navy warships and aircraft fleet. Russia is returning military equipment to Ukraine not only for political, but also for purely technical reasons: most often it is unsuitable for real combat use.


Russia transferred to Kiev more than 350 units of military equipment located on the territory of the Crimea in the former military units of Ukraine. This was said on Wednesday by Deputy Defense Minister General of the Army Dmitry Bulgakov. He clarified that the export of tracked and wheeled vehicles was almost completed. Negotiations on the return of 70 warships and vessels of the Ukrainian Navy and the fleet are also ongoing.

At the same time, the Ministry of Defense is ready to complete the transfer of all equipment by June, but Bulgakov emphasized that the export process was complicated by the constant disruption by the Ukrainians of the terms for the provision of rolling stock. According to him, the bulk of the remaining military equipment is deployed by the forces of the Black Sea fleet Russia at the loading station. “These weapons and military equipment are being transferred in the state in which they were abandoned by Ukrainian troops,” Bulgakov noted.

Previously, contradictory information appeared on how the work is going on the return of equipment, the list of which has changed all the time. Moreover, the Ukrainian press reported that all the equipment sent to the mainland was allegedly completely disabled by Russian soldiers.

On the eve of and. about. Andrei Senchenko, deputy head of the presidential administration of Ukraine, said that an agreement was reached between Moscow and Kiev on the withdrawal of all Ukrainian ships from the Crimea; According to him, these ships are now in Sevastopol.

In early April, the Commander-in-Chief of the Russian Navy, Viktor Chirkov, said that the 79 ships of the Ukrainian Navy remain in the Crimea. Also, the Black Sea Fleet refused to use the Ukrainian diesel-electric submarine "Zaporizhia" (submarine project 641) because of its moral and technical obsolescence.

In turn, the head of the Crimean Media Center of the Ministry of Defense of Ukraine Vladislav Seleznev reported on the agreement reached on the withdrawal of Ukrainian aircraft. “One plane will take off itself after maintenance, some more will be transported by land transport,” Seleznev noted.

As the newspaper VIEW, reported, to return to Ukraine its equipment ordered Russian President Vladimir Putin. Note that if the Ukrainian equipment remained in the Crimea, it would be considered a trophy. In other words, this would be a sign that there was a war between Ukraine and Russia, even though the new status of Crimea was determined by a referendum in which the overwhelming number of inhabitants of the peninsula spoke in favor of independence from Ukraine and joining Russia.

After the August 2008 events of the year, when Russia conducted an operation to force Georgia to peace, captured weapon and the enemy equipment was not returned to Tbilisi. Moreover, among the trophies were American samples. Washington has repeatedly demanded that this technique be returned, but Moscow pointed out that “we don’t need this weapon, we are not going to shoot American rifles and machine guns, but these are military trophies we’ve got.”

As the Deputy Minister of Defense of Ukraine Leonid Polyakov said earlier, if Kiev fails to take out its equipment and property, the country will demand compensation from Russia in international courts. The Ukrainian authorities estimated their military assets in the Crimea in 11,439 billion dollars, and the volume of ammunition - in 36 thousand tons.

As for the Ukrainian technology in the Crimea, basically all of it is 70-s of release and, as noted in the Ministry of Defense, without the prospects of using it in the Armed Forces of Russia. "Utilization of equipment, and even more so its restoration or modernization does not make sense because of inefficiency and high cost," they said there.

Experts have indicated that this armored vehicle is not suitable for conducting full-fledged military operations. However, part of the equipment can be put into service, and the rest - go for parts. As Vasily Kashin, an expert at the Center for the Analysis of Strategies and Technologies, noted that during the entire post-Soviet period, Ukraine almost did not purchase new weapons, but individual air defense and communications equipment is of some value.

“A few dozen units of automotive equipment were purchased per year. In Russia, in the worst years, such weapons were bought by hundreds and thousands. Ukraine once bought 10 tanks Oplot upgraded the old T-64 tanks. That was the maximum. There were single purchases of infantry weapons for various special forces, communications, radar. There is a small chance that some of this is in the Crimea. In general, all that the Ukrainian army has is a mountain of Soviet weapons, in many respects with expired storage periods, first of all, this concerns missile weapons. Its quantity in a combat-ready state is constantly decreasing, ”Kashin said.

We add that in exchange for the exported Ukrainian equipment, the Crimea gets modern weapons. Instead of returning the main battle tanks T-64, the peninsula receives upgraded T-72. At the end of March, 10 of such vehicles arrived at the location of the military unit in Perevalnoye.

Ctrl Enter
Noticed oshЫbku Highlight text and press. Ctrl + Enter
We are
The deputy head of the Ministry of Defense told about providing the Armed Forces of the Russian Federation with new equipment and consumablesUkraine has completed tests of the armored vehicle Kozak
Military Reviewin Yandex News
Military Reviewin Google News
100 comments
Information
Dear reader, to leave comments on the publication, you must sign in.