The case of the militants hopelessly lost 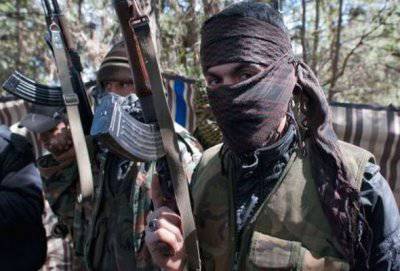 In the area of ​​the city of Adra, Damascus Province, servicemen ambushed a large group of terrorists. At least 20 militants destroyed, several dozen captured. Fighting continues around the villages of Mlekha and Khan Ash-Shih, as well as in the city of Dareia. And in the village of Al-Muaddamia, more than 130 terrorists chose to fold weapon and surrender to the authorities. At the same time, around 30 the gangsters surrendered in the city of Homs, in the neighborhoods of the Old City.


Currently, many of the militants, especially Syrians by nationality, understand that their cause is hopelessly lost. This was especially clearly manifested after the strategic victory of the Syrian army in the gorge of Kalamoun, which made it possible to cut off the terrorists from the supply bases in Lebanon. In addition, the Geneva-2 international conference process played its role. Of course, the western mass media present the situation as if the conference had completely failed and did not yield any results. But it was in the course of the Geneva talks that the practice of local peace on the ground was born.

The situation remains alarming at the other end of the country - near the city of Kasab and the Syrian-Turkish border. But even there the army occupied almost all the heights, freeing several villages from the terrorists.

According to eyewitnesses, if not for the direct intervention of Turkey, then Kasab would not have been captured. But it was Turkish artillery that fired at Syrian Tanksthat defended the city. Moreover, the militants stole the belongings of residents who left their homes. This good was exported to Turkey and is now sold at a low price. In the same way as earlier it was done with the property of the looted factories and factories of the city of Aleppo ...

In Damascus and Aleppo, terrorists continue their dirty revenge against the civilian population. So, 7 in April in the city of Aleppo was fierce shelling from mortars of the Al-Hamdaniya quarter and Saadallah Al-Jabari Square. 11 people died, more than 50 were injured, including heavy ones.

In Damascus, in a populous district of Baramka, 5 citizens were hit by mortar shelling from bandits. Among the wounded is a child-girl.
In Homs, in the quarter of Bustan Ad-Divan, “opposition” militants shot dead a prominent religious leader, 72-year-old Christian priest Francis van der Locht.

The terrorists who wanted to commit a major terrorist attack on one of the markets in the city of Homs, themselves died from the explosion of a car bomb. 40 militants went to the Guries before they managed to commit a crime against the civilian population.

In Kuneitra province, criminals bombarded a bus in which employees of the Department of Agriculture were driving, injuring two people. One of the victims is in critical condition.

8 April was fired from mortar at the Faculty of Architecture, University of Damascus. Two students injured. In the spring of last year, this department was already subjected to a fierce attack - then the shells hit the dining room, where students, architects, had lunch, several dozen people were victims of this crime. Now - a new attack on the faculty, which produces the specialists that are so needed right now in the country.

At the same time, the West continues to put pressure on the UN on the Syrian issue. Recently, I remind you, the UN Security Council, because of the position of the NATO countries that are part of this structure, refused to discuss the situation in the city of Kasab and the illegal actions of Turkey in Syria. Now, at a briefing on the results of a closed meeting in the UN Security Council, UN High Commissioner for Human Rights Nevi Pillay made a very tendentious report.

She stated that the alleged "Syrian authorities bear incomparably greater responsibility for crimes against humanity committed in four years of conflict." First, Madame even forgot the date when the riots provoked by her masters began. And they began three years ago. Secondly - like many other hypocritical politicians and officials, turned a blind eye to the crimes of the so-called "opposition". Thus, Pillay is the patroness, and consequently, an accomplice and mortar shelling of residential areas, and the killing of religious figures, and the gangster eating human organs, and numerous massacres.

Syria’s Permanent Representative to the UN, Bashar Al-Jafari, denied all the accusations against his country: “We not only reject them, we say that these accusations are false and are deprived of any reliable information ... She manipulates the truth, bluffing. She is biased and uses her very important position in order to increase pressure on the Syrian authorities. ” He added that this is "an integral part of a planned campaign aimed at cornering Syria."

On these days, one of the ex-politicians who had long been written off with anti-Syrian rhetoric history in junk: former British Prime Minister Tony Blair. Speaking on the BBC radio, he said: “We have not intervened in the situation in Syria. In my opinion, the negative consequences of this will be colossal. This will be a big challenge in the coming years, not only for the Middle East, but for all of us. "

When he was reminded that the majority of British citizens strongly opposed such an intervention, he showed that the people's opinion means nothing to him: “Of course, as a politician you should take into account such circumstances, but, in my opinion, this does not negate the fact that it was necessary to go for military intervention. "

Earlier, the same Blair was an accomplice of the two largest war crimes of the United States and NATO countries - the aggression against Yugoslavia and the attack on Iraq.
However, he said in the same interview that he did not repent of the fact that he had participated in the punitive operation against Iraq: “Imagine that Saddam Hussein remained in power. I think that in this case the so-called "Arab Spring" would have come to Iraq. If she came to Tunisia, Libya, Egypt, Yemen, Syria, then the same would have happened in Iraq, and what we are seeing now in Syria would have happened in Iraq. ”
Blair’s “care” about the people of Iraq could be assessed if there was no violence in this country after “humanitarian intervention”. But after all as a result half a million people died! Violence continues there, the attacks are carried out almost as often as in Syria, continuing to take lives.

One could, of course, ignore the words of this former. But there are former prime ministers, but there are no former executioners. In addition, this is the way the current politicians of the United States and Europe reason it.

In particular, the West is trying to create another pretext for new attacks on Syria. If not to justify aggression, then at least to cover the support of terrorists under the guise of "opposition." Such a pretext could be the disruption of the process of exporting chemical weapons. At the same time, the militants intensified their attacks on the city of Latakia, in the port of which chemical substances are loaded onto ships for subsequent export.

A statement on the obstacles to the process of exporting chemical weapons was made by the Russian Foreign Ministry: "Unfortunately, our attempts to attract Western countries to real interaction in order to level out the threats emanating from illegal armed groups regarding the operation to remove chemical weapons components have not received an adequate response. In particular , our proposal to adopt a special statement by the President of the UN Security Council on this subject was not supported, ”the Russian Foreign Ministry emphasized.

However, the new wave of anti-Syrian hysteria is not new at all. But every time such an increase happens exactly when the terrorists suffer regular defeats. And the stronger the hysteria of the West, the more obvious that the case of the bandits is lost.

In the province of Damascus in the area of ​​Kalamoun, the Syrian army liberated from the terrorists the important settlement of Rankus, located near the city of Saydnaya.

And in the city of Homs on Al-Khudari street two explosions of mined cars rang out. More than 20 people died, hundreds wounded. Huge damage to property.

Ctrl Enter
Noticed oshЫbku Highlight text and press. Ctrl + Enter
We are
The attacks continue to claim the lives of the Syrians, and the Belt of the Virgin Mary returned to HomsSyria: Americans scare themselves, and Asma Asad buys chairs
Military Reviewin Yandex News
Military Reviewin Google News
82 comments
Information
Dear reader, to leave comments on the publication, you must sign in.