CNN correspondent visited the center of the Donetsk Republic

CNN correspondent visited the building of the Donetsk regional administration, which is controlled by pro-Russian activists. Kiev authorities claim that the situation in Donetsk is under control, but the demonstrators are serious, the reporter said. 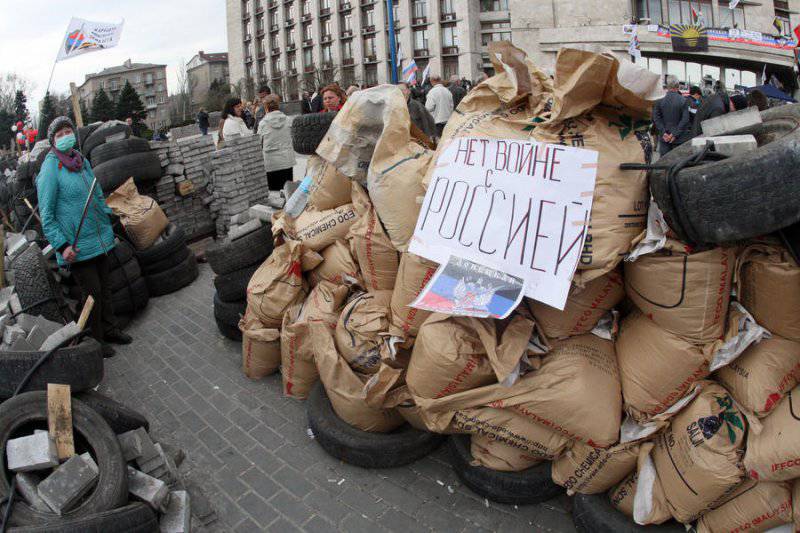 CNN correspondent visited the building of the Donetsk regional administration seized by activists, reports Ino-tv. The whole territory of the self-proclaimed Donetsk People's Republic reminds pro-European protests on the Maidan: barricades were erected, bottles with “Molotov cocktails” and tires lay, the journalist said.

However, local protesters are distinguished from maydanovtsy by what they want join Russia. "More than 6 thousands of people - not only men, but also women and the elderly - are ready to stand up for the Fatherland," said a member of the Eastern Front group.

The journalist notes that people in Donetsk are serious. They fear the advance of the Ukrainian forces and barricade the stairways. The city often turn off the electricity, and people are afraid that it is at such moments that the special forces will begin to attack.

Residents are also concerned that the tense situation in the country could cost them their jobs. Prices are rising, salaries are depreciated every day. Many of the activists yearn for the Soviet past. “My dad is a retired KGB colonel,” said Tatyana, a Donetsk resident. - And I, probably, passed on his genes. That's why I'm here. I'll be here until the end. ”

Sergey Taruta, a Ukrainian billionaire who was sent to this region in order to improve the economic situation and fight corruption, was appointed Kiev Mayor by the Kiev authorities. The mayor himself says that it’s not the residents of the city who are behind the unrest in Donetsk.

Donetsk is a small city located in the heart of the struggle for Eastern Europe, which, despite its size, is of great importance, the CNN correspondent concludes.