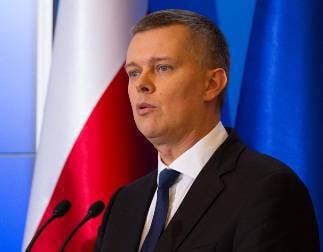 The aggression in Ukraine radically undermined confidence in Russia as a predictable partner, guided by international law. The military conflict between Russia and Ukraine is becoming possible, but this does not mean that there is a military threat to Poland, says Tomasz Semoniak, Minister of National Defense of Poland. P.2 cites the text of the minister’s interview with the newspaper Vyborcha.


- What does the Minister of Defense think when he reads in the newspapers that for three or four days Russians may be in Warsaw or that within a week of the war our army will hide in the woods?

- This is nonsense, the purpose of which is to scare readers and increase sales. Such opinions are divorced from reality. Fortunately, readers of such newspapers behave much more responsibly than some commentators, and hysteria does not respond. We have a good army, trusted by society. We are members of NATO, we have allies, whose defense potential substantially exceeds the capabilities of potential adversaries. This is not 1939 year.

- This is a strong memory.

- Despite all the complaints, NATO has never let down any of its allies. The block has never been subjected to such attempts, and this testifies to its strength. I believe that our opponents should take into account in their calculations that the United States and NATO will take a military part in defending Poland, since it is impossible not to take into account the US military activity over the past few years in different parts of the world in order to defend allies, values ​​of the West or fight with terrorism.

- However, it is difficult not to perceive what is happening in Ukraine as a threat. On Sunday, a referendum was held, which sanctioned the illegal separation of Crimea from Ukraine. Information came from Kiev that troops were stationed on the border with Ukraine and Tanks, about the riots in the cities of eastern Ukraine.

- Creeping annexation of the Crimea is a violation of international norms. What is happening around Ukraine is an example of the use of sophisticated propaganda and military pressure. It is not pure play. Various disguised people with no insignia appear, riots are provoked.

- The military conflict between Russia and Ukraine has become possible, the Poles have the right to feel concerned, but there is no military threat to Poland. Therefore, let us not succumb to insane proposals to return to the call, to double the defense budget, or to such fantastic ideas as defense of the territory in the form of guerrilla war. It can't impress anyone.

The guarantee of our security is our own consistently modernized professional army, supported by mobilization reserves and strong allies ready to act. However, a discussion of how we can increase our defenses will never be redundant.

- What does the crisis in Ukraine teach us?

- To the fact that traditional military conflicts are still possible, and not just asymmetric or cybernetic. And it is important that the soldiers be trained and disciplined, so that they have aircraft, missiles, and tanks at their disposal. Reflecting on the latest developments is intended for critics of the recent decision to buy Leopard II 119 tanks in Germany. I believe that over the past years we have stood firmly on the ground, strengthening the defense capability of the army to protect the territory of Poland. Let us not be misled that Europe will always be safe.

- NATO sent fighters to the Black Sea region, AWACS planes fly over Poland and Romania, F-12 and 16 planes from the US military flew to the teachings to Poland. However, there are critics who claim that NATO’s reaction is too cautious.

- In my opinion, it is adequate. The question of why NATO is doing nothing, I heard two hours after the meeting of the Federation Council, which authorized President Putin to use the armed forces in Ukraine.

It is important to remember: Ukraine is not a member of NATO. The Union takes measures adequately to the extent of the development of this crisis and in accordance with the assessment of real threats to its members.

- After the decision was made to send American F-12 airplanes to Poland 16, Belarusian President Alexander Lukashenko announced that he felt in danger and asked Russia to send 12-15 airplanes. In response, Su-27 aircraft were sent. How do you comment on this?

- As a propaganda-political act, which does not matter much, because there is nothing easier than increasing the number of aircraft from both sides in a few hours. I regard the speech of the President of Belarus as an attempt to break the silence and thoughtful statement in favor of one of the parties to the conflict.

“However, if combat aircraft are flying in the air, one of the pilots may have a finger to tremble, some accident with an AMRAAM rocket may happen ...”

- Polish and American pilots will work out the interaction, and not look for reasons to create tension. Such risks do not seem plausible to me.

- In the US, there were statements that, due to what is happening in Crimea, the Barack Obama administration must rethink its previous policy towards Central Europe, and, for example, return to the concept of the “heavy antimissile shield” of the Bush era.

- It is good that in the USA they began to talk more about the security of European allies. The question of the shield, however, arises there, mainly as an element of political criticism of the current administration. There were also voices in Poland itself, saying that it was our government’s fault that President Obama changed the concept of the shield.

The truth, however, is that the Obama concept provides for increased protection for Europe. The facts are as follows: a base is being built in Romania, which in 2015 will close part of the territory of Poland, according to the plan in 2018, a base will be built in Pomerania in Regicow. From a political point of view, the goal of increasing the US military presence will be achieved, and Poland’s security will increase.

- Due to what happened in Ukraine, will Poland revise the modernization program of the Armed Forces before 2022 to bring it in line with potential threats from the East and “classic” conflicts?

- There is no need, except for individual adjustments. Obviously, the fundamental principle does not lose relevance - Poland and NATO should protect their airspace. This is due to the program F-16 and the priority given to the creation of air defense.

“Within the framework of the Vistula program, Poland wants to purchase six anti-aircraft and anti-missile defense systems. However, this is a distant prospect.

“In the end, there should be eight.” This is the biggest in stories Poland's modernization program. We must ensure the interests of our industry and science. At present we are at the stage of negotiations with potential providers on this issue. I believe that we will find a way to speed up the receipt of these defenses.

- Some time ago there was information that the Ministry of Defense wants to equip F-16 with AGM-158 cruise missiles (JASSM).

- Yes. We are waiting for the approval of the US Congress to sell these missiles to Poland. It is assumed that it will be received in this half year. This is one of the elements of our closer military engagement with the United States.

- Returning to the tank forces, the Ministry of Defense decided to abandon the weak and outdated T-72 tanks, and, which causes controversy, the 233 tanks RT-91. At the same time, Leopard II tanks will be set up for repairs. At the time of the threat, is this a reasonable solution. Can it happen that we remain without tanks at all?

- It can not be. We planned to gradually repair our Polish enterprises 128 tanks Leopard A4, but first get from Germany more modern tanks Leopard A5. Now the schedule can be adjusted, repairs and service life shifted. It should be easy to analyze.

- How much will what happens in Crimea change the perception of Russia by NATO and EU members? In recent years, Moscow was perceived primarily as a partner.

- NATO and Poland wanted cooperation with Russia, although various tendencies were found in the policies of this state. What happened has seriously undermined trust in Russia as a partner guided by international law. I believe that no one in NATO feels any satisfaction in this regard.

This new situation requires a long-term response from NATO. A NATO summit should be held in the UK in September, of course, this will be topic number one.

However, in recent years, NATO has a little overslept the situation. Russia partially modernized its armed forces, which regularly conduct exercises, which the West did not do. Steadfast Jazz 2013 exercises were held in Poland for the first time in the last 10 years.

In the past few years, NATO, the USA and Poland have conducted two major military operations in Iraq and in Afghanistan. Tens of thousands of soldiers took part in them, with joint command, with real threats. We at NATO have been discussing for a long time how to keep the mechanism well-established to date at the highest level, especially since this year we are leaving Afghanistan. Hence the program of large-scale exercises held every two years, the beginning of which was initiated last year by the Steadfast Jazz exercise in Poland.

- How will this creeping Russian aggression towards Ukraine end?

- We are ready for different scenarios. I believe that, unfortunately, we will be dealing with this crisis for a long time and its negative consequences in the economic and political spheres.

For the West, this is the time to draw a number of fundamental conclusions. Energy and the level of funds allocated for defense are top priorities. At the same time, it is also a time to return to international politics based on basic values, democracy and human rights, respect for some countries towards other countries, and excluding threats and blackmail.

We support the European dreams of Ukrainians, they deserve it, because they are fighting for these values. In addition, this conflict makes us realize more deeply that Poland is part of the West, an ever stronger member of NATO and the EU. We need more faith in our strength.