Poroshenko in chocolate and his rating "point"

April 10 2014
53
Oh, if it were not for the mass demonstrations of the south and south-east of Ukraine against the enchanting policy of the “authorities” entrenched in Kiev, then the current candidates for the presidency would not have worked. Providing accurate information about the state of things in the Ukrainian economy for presidential candidates is akin to taboos, but practicing rhetoric about how one of them will fight "with separatism" is always welcome. One promises to return the Crimea until the autumn, the second - to restore order in the southeast until the evening twilight, the third - also to add to Ukraine “new, originally Ukrainian, lands" ...


If you believe the sociological information analysis services operating in Ukraine, then today the leader of the election race in Ukraine is “chocolate king” Petro Poroshenko. If the elections were held next Sunday, then Poroshenko would have received 21% of votes. By today's Ukrainian standards, 21% today is, it seems, a possible ceiling for a political rating. 21% - "point" or what? ..

The closest competitor Poroshenko - the main ukrosideliytsy who had left before the date - only 11%.

Why is Poroshenko leading? There are certain explanations for this. No, they are not connected with such a concept as “political popularity”. Poroshenko is a figure that Western “partners” seem to have initially defined as the new president of Ukraine. If they did not determine, would Poroshenko be allowed to invest money in Maidan unrest with an eye on power? Hardly. And if they allowed, so to speak, to “support democratic values” by infusing his personal savings, it means that they saw a “spark” in this person, which you can use in your own interests. 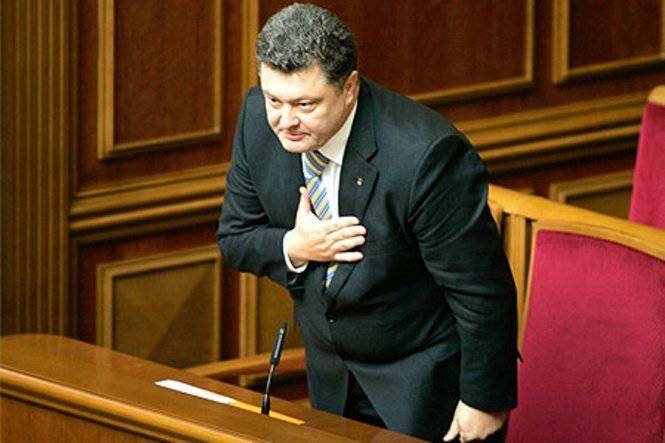 We should not forget that American secretaries of state simply do not meet with foreign politicians who do not have solid political positions in power. But even before the most active and bloody phase of maydanning in Kiev - February 1 2014 of the year - US Secretary of State Kerry met with Petro Poroshenko and, as Interfax reported in his time, agreed with him on concrete real steps. At that time, it was vaguely imagining what exactly the steps the head of American diplomacy could discuss with a deputy of the Verkhovna Rada, but now these steps are manifested more clearly.
It can be assumed that in early February, John Kerry patted the "chocolate king" of Ukraine on the shoulder and noted his financial contribution to the cause of destabilizing the situation in the Square, aimed at overthrowing the legitimate authorities and completely reorienting Ukraine towards the West. We can assume that more than a few months ago Poroshenko’s 2 for his financial activity in sponsoring the Maidan (if it bears fruit, and she bore this fruit) from Washington promised to reward. Presidential post?

By the way, the voiced data on the Poroshenko rating are not presented by the Ukrainian statistical services at all, but, remarkably, by the American IRI Institute. For this institute, the statistics were generated by the Baltic Surveys / The Gallup Organization. The data is published on the site. Dumskaya.net.

Is this the first place in the election race? And this is taking into account the fact that 9 from 10 Ukrainians have not really heard anything about the presidential program of the “candy” magnate and certainly have not studied it. How is he going to take the country out of the crisis, on what basic principles under Poroshenko will the economy stand, which, as it is now fashionable to say, will he use the braces to consolidate Ukrainian society? About this silence. But Poroshenko, having entered the trend, is trying to report on how he will fight against “separatism” today - this is much more exciting today for Ukraine. Salaries? Pensions? Social guarantees? No, no, no, nothing to it today - the main thing is “moskalskie provocateurs on the Gilyak” ...

Arriving in Odessa the other day, “a man in chocolate,” stated that a month and a half of the work of the new “authorities” is enough time to gather all the forces into a fist.

At the meetings held in Odessa with the leadership of the region, the Ministry of Internal Affairs and the Security Service of Ukraine, steps to prevent the seizure of state authorities and any separatist actions were clearly defined. One should not allow pseudo-tourists to destabilize the situation. They must be punished for their provocative actions. We demand the same in Donetsk, in Lugansk, in Kharkov and throughout Ukraine.

Some leaders of the Party of Regions, who have found a place in the Russian split scenario of Ukraine, have been involved in the organization and financing of separatist riots. Destabilization in the East, the threat of disrupting the presidential elections in at least part of the regions is an element of this scenario.

In order to comply with his "points" rating, Poroshenko quickly determined the circle of guilty persons in accordance with all the traditions of the Maidan. The guilty are the “Party of Regions”, and that is especially in the form of Maydanovsky: Russian tourists ... Well, in fact, Poroshenko will not say that it is for his “chocolate” money and patrons from the United States in the end and brown crawled out of their gadyushnikovs, who did everything not only to destabilize the situation in Ukraine and its split, but also in order that ultimately such persons as he himself would have the opportunity to try their luck in the presidential election.

And the persecution of Russian tourists in the resort places of Ukraine is already a separate история. A sort of Poroshenkovsky derivative of fascism. It remains only to injure Poroshenko to run up to the man who got off the Russian train or got off the plane, arriving from Russia, and fastened on his clothes a piece with the inscription "pseudotourist". And with that bacchanalia in Ukrainian politics, it is not even surprising that such a context is created by a man whose father at one time took the name of Poroshenko’s wife, being born Valtsman ...

Ctrl Enter
Noticed oshЫbku Highlight text and press. Ctrl + Enter
We are
Situational analysis of the death of the MH17 flight (Malaysian Boeing 777), made on the basis of engineering analysis from 15.08.2014Results of the week. “Tut's neighboring state was threatened with war. Lend, please, half a dozen millenchik on militaritskih goals "
Military Reviewin Yandex News
Military Reviewin Google News
53 comments
Information
Dear reader, to leave comments on the publication, you must sign in.