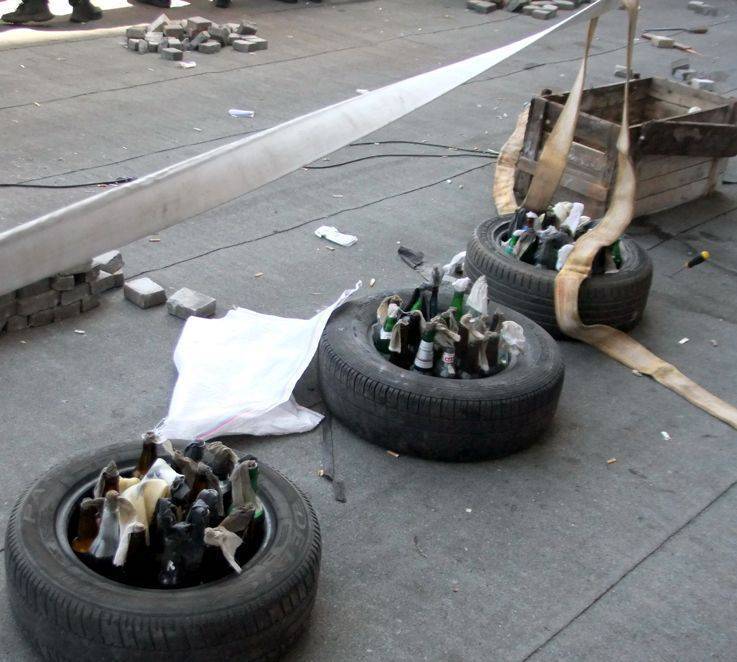 The April uprising in the Donbass against the political repressions of Kiev became a turning point in the development of events in the South-East of Ukraine. The active opposition of the Bandera Kiev government began even before the collapse of the economy, and this could lead to its fall as early as May, when the reforms of the IMF will bear their first fruits.

The point abductions of the Ukrainian Security Service-CIA leaders of the protest could not intimidate anyone, but quickly radicalized the protest. The abductions of activists were perceived by the South-East of Ukraine as a declaration of war, without its formal declaration, and the protest quickly gained critical mass, after which it could not be stopped. After all, Donbass is a “country of cities”, a big industry and a working class, that is, an increased ability to mobilize.

Bandera power proved its stupidity, trying to "decapitate" the protest that went "from below" by self-organizing people. However, there is information that behind this self-organization is a network form of struggle, then it is an even more formidable signal for Kiev temporary workers.

Further developments in the South-East already emerges quite clearly. Bandera, due to its gangster nature, is unlikely to give up the bet on the forceful suppression of the South-East. It is natural for them. The power of the militants, by definition, can not have the public outlook. She is sure that Ukraine exists for her, and not she for Ukraine. If Kiev continues to impose Bandera on the Russian-speaking regions of Ukraine, then the aggravation of the situation in the Southeast is inevitable.

The first phase of the uprising in Donetsk, Kharkov and Lugansk fulfilled its tasks: the Pitmen declared themselves, put forward their slogans, defined political goals, demonstrated the essence of the Kiev authorities to the world, that it is impossible even to enter into dialogue with it.

The course of events will lead the protest to the next phase: if its legal forms are suppressed by power, it cannot but take on illegal forms, that is, it will somehow result in a partisan war, a civil war. It is not for nothing that Lugansk activists called themselves “partisans”; they, at the scene, understand this better than others.

Today, the rebels are blocked in the buildings they occupy; it is unlikely that they will succeed in making Brest Fortresses out of them. How to resolve this situation - we will not guess, the events in the Donbass take a revolutionary, that is, spontaneous. If the element of the people will overrun the Donbass literally tomorrow, the occupied buildings will become the headquarters of the revolution, if not - they will fall, you must be aware of this. Bandera militants and mercenaries frostbitten enough to go to any crimes.

And then, when the shock from the tragedies passes, the Donbass will quickly move on to the real “guerrilla war”, the economic chaos with the start of the “European” reforms will only spur the angry masses of the Donbass worker.

There seems to be no other continuation of the events taking place before our eyes. The residents of Donbass understand that the alternative is a slow death in the reforms and in the dungeons of Bandera, the humiliating fate of people of the “second class” on their land.

There still remains an external factor, on the one hand, Russia, which warns the Kiev junta against unleashing a civil war, on the other - the United States, supporting the junta, which brought it to power. Bandera's pursuit of the suppression of the Donbass is carried out, let's not forget this, with the support of the Americans, and not only secret - CIA agents, but also mercenaries from private military companies.

We will not build illusions, as some political scientists do, as if the USA does not understand something, or does not know it. All they understand, and everyone knows: the Bandera power ultimately performs their will.

The head of the Russian Foreign Ministry, Sergei Lavrov, said of this “will” in a diplomatic language: “Since the seizure of power, no positive gestures have been made towards the south and east of Ukraine. On the contrary, these gestures were mostly negative, starting with stories on the abolition of the law on regional languages, although it was not signed, but nevertheless the signal was very clearly sent south and east, and ending with statements that no federalization, no special status for the Russian language, and in general, they say , ethnic Russians have nothing to do with Ukrainian statehood. ”

It is necessary to proceed, probably, from the worst option: the USA will lead the matter to the most negative scenario, to the unleashing of a civil war in Ukraine, in their cannibalistic terminology - “controlled chaos”. Hands Bandera, remaining behind them and blackmailing Russia with sanctions, and maybe worse. The impudent, cynical statements of the US State Department over Ukraine give no reason to hope that the United States will abandon its idea of ​​creating “controlled chaos” on the borders of Russia.

The decisive Russian counteroffensive in the Crimea, as a result of which the strategy of the "chaos" of the USA in Ukraine was dealt an unexpected blow, says that Russia will defend the security of its borders. Moreover, the Crimean victory showed: the United States is very vulnerable, because they act standardly and straightforwardly, they are easy to calculate. What Moscow is now apparently busy with ...