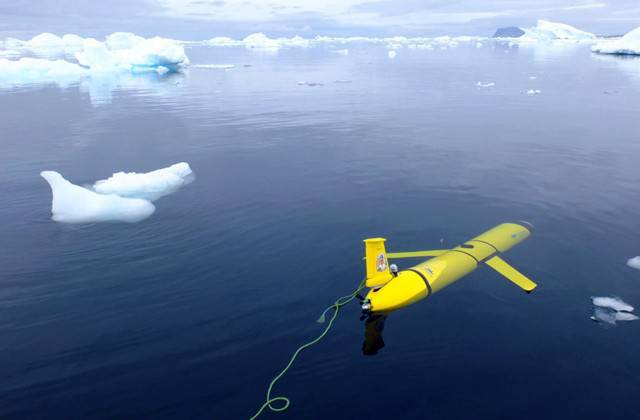 The British plan to use robots for intelligence and anti-submarine operations.

The British Navy has concluded a cooperation agreement with the National Oceanographic Center (REC) - a research institute will help the military introduce unmanned submarines into the fleet, reports Naval Technology website.

“The protocol of intent we concluded was an important step in the relationship between oceanographers and the Royal Navy. At the new level of interaction, we will be able to exchange ideas and work out a joint working strategy, ”the representative of the GC Geyrain West comments on the agreement.

The command of the British Navy believes that autonomous uninhabited underwater vehicles (AUV) can be used for a wide range of tasks from the simple collection of information about the underwater landscape to the detection of enemy submarines.

In order to clarify their capabilities, naval sailors and REC specialists organize a series of joint tests. Oceanographers of the center have considerable experience with underwater drones - their fleet includes several types of small submarines used to gather information about the depths of the sea.

The first two tests have already been planned - one ANP will be placed aboard a hydrographic vessel off the coast of Plymouth, the other on a minesweeper in the Mediterranean. Both devices must perform a series of tests designed for them by scientists.

Hydrographic ship is designed to study the topography of the bottom, as well as cartographic and radar surveying of the coast, for this purpose it is equipped with echo sounders and locators. Similar tasks at the mine search vessel, only it does not just explore the bottom, but tries to find underwater mines.

“We specifically selected vessels working with the same equipment,” explains Navy Hammond, the officer in charge of the tests, “the information collected by the AUV will be crucial for the operations that these ships must perform. The task of our tests is to demonstrate that these drones can change the approach to anti-submarine defense. ”

If the British are just beginning to use underwater drones, the US Navy has a fleet of 65 unmanned submarines, and by the year 2015 intends to increase their number to 150. Small one-time ANPs are used to detonate sea mines, and reconnaissance drones are increasingly becoming an everyday part of the equipment of submarines and warships.

In December 2013, the US military took an active part in the testing of the newest underwater robot, operating on the principle of marine squid - it moves almost silently, sucking and pushing water. The submarine operates with the help of an electric battery, which allows it to be in autonomous navigation throughout the year.

In the USSR, in the middle of the last century, systems capable of acting autonomously were designed, says Konstantin Sivkov, vice president of the Academy of Geopolitical Problems, says.

“In the 1956-57, a special torpedo with a nuclear warhead and a nuclear power plant was created. She had to be delivered to the place in front of the submarine, after which it was planned to launch in the direction of coastal targets. The task of controlling the torpedo was solved by correcting its movement using navigation systems, ”he told Russian Planet.

According to Sivkov, military underwater robots in the future will be used as widely as possible.

Ctrl Enter
Noticed oshЫbku Highlight text and press. Ctrl + Enter
We are
The action “Military service under the contract is your choice!” In Rostov-on-Don: future contract servicemen, exhibitions and “Russian Knights”I fight for the electric body! Ground mobile robots on today's and tomorrow's battlefield. US Technology Overview
Military Reviewin Yandex News
Military Reviewin Google News
13 comments
Information
Dear reader, to leave comments on the publication, you must sign in.