And again, the Russians are coming. In the "twenty" was less than the "seven"

April 10 2014
106
Paul Milchrist from Monument Securities the other day reminded to the reading public about how often the US Congress has done, dealing with issues of international relations. Even today, congressmen and Obama cannot agree on the issue of reforming the IMF, which is one of the factors in the provision of the financial assistance promised by the White House to Ukraine. At the last G20 summit, the BRICS countries decided that 10 April is the deadline for the US decision on IMF reform. Congress won't solve anything? BRICS can only express regret ... After all, it is already clear to everyone: the “exclusion” of Russia from G8 did not isolate Moscow at all, and it would not work out to expel it from the “Twenty”. 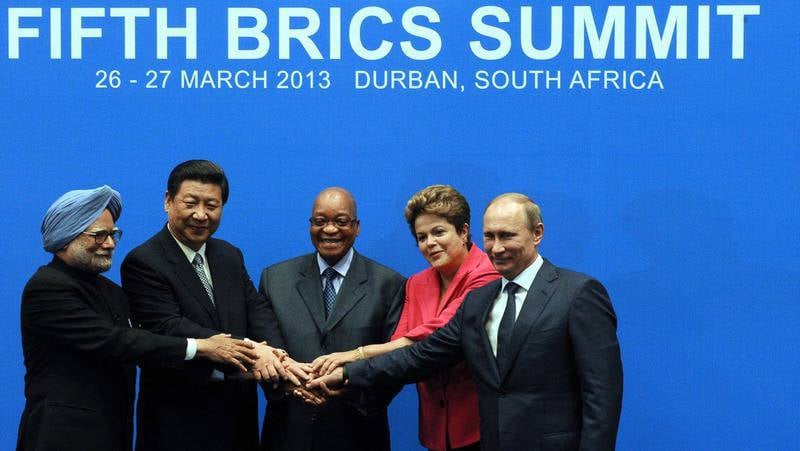 Congress has long opposed US rational policy in the international arena. According to the author notes, this is happening with 1919, when the leaders of Congress did not wish to support the participation of the United States in the League of Nations. The outcome of this irrational policy was the new world war.

The author recalls that in 1930, the American congressmen adopted the Law on Tariffs, commonly known as the Smoot Act - Hawley Act (Smoot - Hawley), which marked the transition to the trade practice “Razor Neighbor”. As a result, the Great Depression deepened and expanded (this is the opinion of the famous expert Mr. Bernanke).

Not long ago, the US Congress opposed the demands of President Obama to speed up the consideration of international trade agreements. As a result, American partners became distrustful of Washington: it seemed to them that America was not capable of ratifying trade agreements. Distrust, in turn, became a catalyst in the breakdown of the next Doha Round, which slowed down the development of the World Trade Organization (WTO).

Finally, today the US Congress is engaged in the issue of providing financial assistance to Ukraine. And the following is important here.

As the analyst notes, IMF reform implies the ratification of the IMF decision on 2010 of the year to increase quotas. We are talking about quotas and, therefore, voting rights for developing countries - and contributions should be formed mainly at the expense of the European members of the Fund. The reform aims to improve the IMF’s lending capacity.

But many congressmen, especially Republicans, are generally suspicious of the IMF and its activities. The reform package, associated with a steady increase in IMF resources, caused “fierce resistance” among them, the author writes. Congress leaders have resisted for more than three years.

The G20 Summit, held in February 2014, showed that the world's leading economies may stop waiting for an American decision. At the meeting, it was said about “deep regret” that the reform of the IMF stands still. Summit participants called on the US to ratify the reform package before the April G20 meeting.

The Minister of Finance of Russia, Mr. Siluanov, even suggested, the analyst notes that the IMF should be reformed without US approval, and this statement caused approval among the leaders of the BRICS countries. True, it threatens the Foundation split ...

President Obama believes that the IMF should play a leading role in supporting the economy of Ukraine. The approval of new quotas is directly related to the legislation of Ukraine. However, the leader of the Democrats in the Senate, Mr. Reed, removed the section on the provisions of the IMF reform from the document on assistance to Ukraine, saying that the bill with this clause in the Senate would be blocked, and in the House of Representatives he would have no chance to pass.

According to Paul Milekrist, it is unlikely that the United States will complete (yes there will even begin!) To move in the direction of legislative measures to reform the IMF before April 10. It is this “deadline” term that the BRICS countries of America set.

G8 has evolved into G7: The United States has avenged Russia with an "exception" for actions in the Crimea. But this decision did not isolate Russia. There is not even a hint that Russia will be excluded from G20. The United States and its allies understand that some G20 members will not approve this decision. The other day, the foreign ministers of the BRICS countries, who gathered at the international conference in The Hague, issued a statement condemning the "escalation of hostile rhetoric, sanctions and counter-sanctions." They confirmed that all G20 participants are equal, and no member can dictate to the “twenty”. In a word, the author notes, their statement became a kind of pluralistic manifesto. In the modern multipolar world, no one should establish their own rules.

BRICS countries could gain control of the IMF, despite the US veto. And this will mark the end of a single global monetary system that has emerged since the foundation of the IMF in 1945. The new world system will become multi-currency. The author concludes that the April 10 meeting may mark a turn in stories world economy ...

Thus, let us add from ourselves, the United States once again proved the dubiousness and inefficiency of that “democratic” system that has developed in a state that is trying to retain the global “hegemony”, that is, the role of a planetary gendarme. An absurd bipartisan “popular” will in Congress leads either to interparty clashes, or to “turn off the government” (the last was last year), or to the US failures in international politics - right down to the unequivocal “partners” distrust of Washington.

However, soon Obama and the congressmen will have no time for geopolitics. According to proven rumors, in the coming years, supervolcano may erupt in Yellowstone Park. Washington is already thinking about the mass relocation of its citizens not to Brazil, or to Australia. In South Africa, the White House has already been refused, despite its generous offer to transfer ten billion dollars each year to provide for immigrants. In fact, when the ashes cover North America and pierce a huge hole in the ozone shield, the dollars will turn into the most natural candy wrappers ...

Observed and translated by Oleg Chuvakin
- especially for topwar.ru
Ctrl Enter
Noticed oshЫbku Highlight text and press. Ctrl + Enter
We are
Geopolitical mosaic: the Obama administration is going to advertise the bombing of Syria through a TV show, and Putin and secret weapon will help DamascusBRICS: friendship against the dollar
Military Reviewin Yandex News
Military Reviewin Google News
106 comments
Information
Dear reader, to leave comments on the publication, you must sign in.