Will the European Union last until 2025? 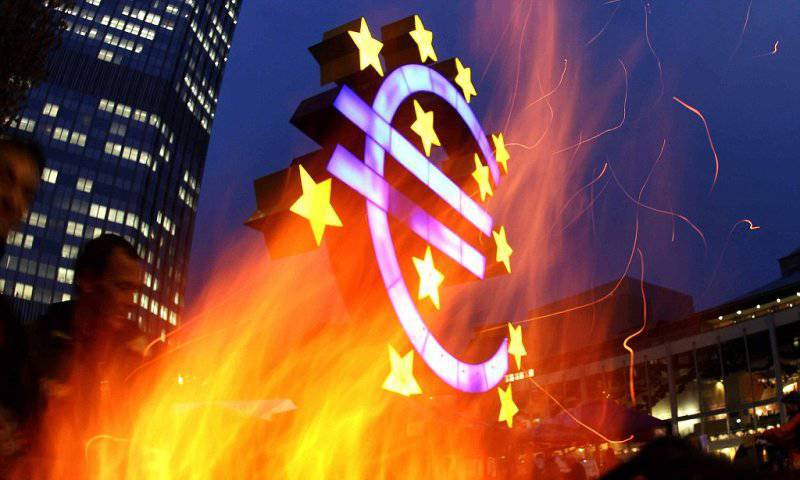 The European Union has exhausted growth opportunities and, like the Universe after the Big Bang, is beginning to shrink. The process of collapse has already been launched: Scotland and Catalonia have declared their intention to declare independence, which, most likely, after gaining sovereignty, will be outside the political borders of the union. In such circumstances, the West clearly has no time to follow the development of events in Ukraine, and even less to take care of its territorial integrity.

"Pain points" of the West

The European Union is too diverse and multinational to remain united. Friction between representatives of different ethnic groups and confessional groups now and then make themselves felt: either the Northern Irish insurgents shoot at the English military unit, or the Basques from ETA blow up a police station in Spain. In the fat "zero" passions managed to somewhat reduce, but the deep crisis of the Western economic system again exacerbated the contradictions.

The European Union has incredibly many pain points, some of which are of increased danger. In addition to Catalonia and Scotland, independence is required in Flanders, in Sardinia and in the Veneto region. In Greenland, too, they want sovereignty: this island, back in 1985, refused to join the European structures and, through a referendum, 2008, achieved significant concessions from Denmark on self-government issues. The Transylvanian Hungarians in Romania, the Basques in Spain, the Bretons in France, the Welsh in Great Britain, and the Silesians in Poland desire the creation of their national autonomies.

There is a risk that Hungarians compactly residing in the south of Slovakia will require a revision of their borders in order to be on the territory of Hungary, and Alsatians in France will want to join Germany. However, it’s not a fact that the FRG will manage to preserve its territorial integrity: Bavaria, Saxony, Württemberg and a number of other federal states can take a course towards secession from the next German union.

A similar situation exists in Spain and Italy: these countries consist of many areas that are weakly interconnected. Each of these regions has its own language, its own culture, its own история. Many areas were once separate states, such as Piedmont, Lombardy or Neapolitania. In the Italian Alps there are Germans living in Austria.

The situation is even worse in the neophyte countries: for example, in Croatia, which recently became a full member of the European Union, many Serbs remained after the war. Their integration into the Croatian society is one of the most difficult problems for Zagreb. The slightest spark will lead to a new confrontation. In Lithuania, Latvia and Estonia from the times of the Soviet Union, large Russian-speaking communities remained, oppressed by the authorities of the Baltic republics and without war.

Separatist sentiments are strong on the other side of the ocean. Supporters of the independence of Quebec intend to separate this province from Canada, turning it into a French-speaking republic, a kind of overseas France. Quebec is one of the most developed and densely populated regions of Canada, and its loss will be a painful blow for Ottawa.

In general, in all the above cases, attention is drawn to the fact that the departments require quite prosperous regions that “feed” the metropolis. For example, contributions to the Spanish budget from Catalonia exceed the amount of subsidies received by the autonomous republic. The same can be said about Veneto and Lombardy, where most Italian industrial enterprises are concentrated. Why do northern Italians have to keep southerner Italians who are employed mainly in the low-income agricultural sector? In addition, the mafia is strong in the south, Naples is its unofficial capital. And about Turin or, say, Venice this can not be said.

The global economic crisis has exacerbated the relationship between the regions-breadwinners and metropolitan countries. The Catalans and the people of Northern Italy are wondering why they should be fed at their expense in Madrid and Rome. Interestingly, in the same way they think in Eastern Ukraine, where industry is developed not like the western part of the country. But the West treats the separation of Catalonia with understanding, but does not even want to hear about the creation of a sovereign state in the Russian-speaking South-East of Ukraine. However, the policy of double standards Europe and destroy.

The European Union was created with the support of the socialists and the Christian Democrats, but now these parties are inferior to the right. The Right - the enemy of further European integration, supporters of preserving the independence of European states.

Opinion polls indicate that voters' confidence in the ruling parties in Western Europe is declining. No wonder: most of the slogans put forward by Western European leaders are populist and unrealizable in practice. The right - a great alternative to the podnadoevshimi European bureaucrats, these old people from Brussels.

In 1999, the Austrian Freedom Party won the next parliamentary elections. Europe was shocked by this: on the eve of a closer integration, nationalists came to power in one of the key countries of the continent! However, party leader Jörg Haider showed restraint and commitment to the principles of international politics, acting for the good of Austria and its partners.

Later, the right-wing parties FIDES and Jobbik came to power in Hungary. It turned out that they are also not dangerous, and a nation-oriented state may well exist in the very center of a united Europe. In the footsteps of Hungary went Bulgaria, where the “Attack” party is one of the strongest political players. Now the right is gaining popularity in France - voters of the Right Republic are disappointed in Francois Hollande and his helpless euro-socialists.

The positions of so-called euro skeptics are being strengthened. Euroscepticism is especially strong in the UK, which has for many decades opposed the integration policy of Brussels and criticized the idea of ​​federalizing the European Union by introducing a single currency, creating supranational executive bodies and adopting a constitution that is uniform for all European countries. Greenland, as stated above, is also strongly opposed to the policies of Brussels, and is trying to distance itself from the rest of Europe, which, according to the islanders, is slowly sinking.

The processes taking place in the European space are reminiscent of events in the USSR on the eve of the fateful 1991 of the year. In many EU countries - mass actions against the European integration policy of the authorities, radical parties are becoming more active, the ideas of right-wing parties are becoming popular. The economic crisis has shown the failure of the European Union, when many countries were helpless and faced bankruptcy, but instead of supporting the “allies” they received only burdensome loans.

In the near future, anti-European tendencies will only increase. It is obvious that Brussels is not able to preserve its empire, and in the near future we will witness the end of a united Europe.

The only question is how long the process of the collapse of the European Union will take: the EU institutions will degrade not all at once, but separately. Therefore, the crisis in Europe, which began in 2008, will last many more years, until disappointment reaches such a scale when the union will have to be forgotten.