To Odessa or Kiev: where will Putin go?


Because of the rallies and actions in the south-east of Ukraine, foreign media again argue on the topic that has not yet had time to become dusty: will Russia repeat the “Crimean scenario” and how far can Vladimir Putin go.

After the rapid adoption of the Crimea into Russia, the scenario of “Russian Donbas”, “Russian Lugansk” and “Russian Kharkov” no longer seems unrealistic. But the difference is still there - and not only that “our Donetsk” sounds less pompous than “our Crimea,” writes Gazeta.ru in its editorial article “Donetsk - Kherson - Odessa”. 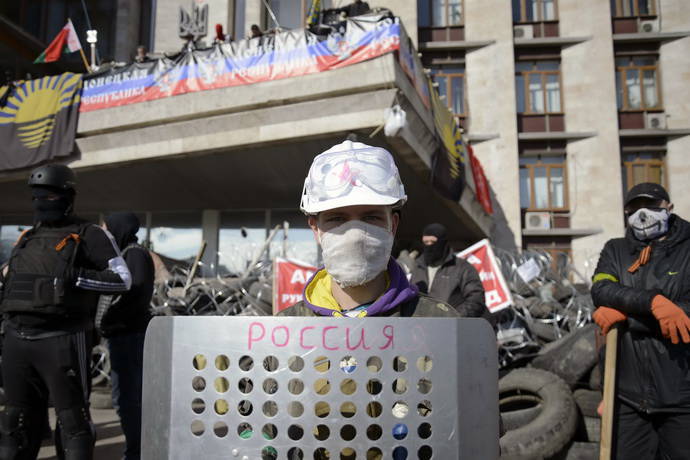 Pro-Russian separatists from the eastern Ukrainian region broke into the building of the Donetsk regional administration, closed there from within, spontaneously “deprived the mandates” of deputies, declared themselves “people's council” and declared the creation of “Donetsk people's republic”. The same people decided to hold a referendum on joining Russia no later than May 11. The same people accepted an appeal to Vladimir Putin with a request to introduce a temporary peacekeeping contingent on the territory of the Donetsk region. And this is one of the main differences between the situation and the Crimean one, the article says.

If in Crimea, the decision to hold a referendum was made by the legally elected Supreme Council of Crimea, even if “at gunpoint”, as they called it in Kiev, in Donetsk the “independent republic” was not even said by the deputies of the local parliament, but by the activists deputies are illegitimate, emphasized in the publication.

If Kiev gives the regions the opportunity to hold "referendums" and declare independence, then the further scenario is also understandable. However, it will not be possible to stop at the accession of Donetsk to Russia. Then you can attach not Lugansk or Kharkov (they can only be a pleasant addition), but Zaporizhia and Kherson — then we can get to “our Crimea” overland through “our Kherson” while the bridge across the Kerch Strait is being built. The next goal is Odessa, because where are we without Odessa, and on the way to Odessa we will have to take Nikolaev. And from Odessa and Transdniestria is within reach, especially since they already wrote a corresponding request to the State Duma, summarized in the article.

Just a few weeks ago, a thorough reflection on the various tactical moves of Russia to invade Ukraine seemed useless to alarmism. Today it seems wise discretion, writes Eugene Sautin in The American Interest. 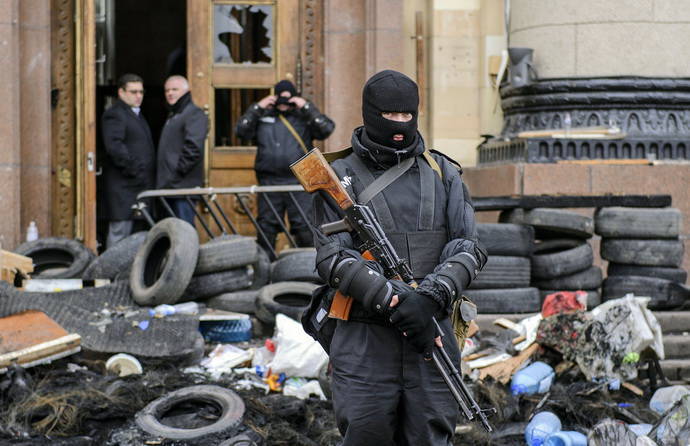 As a repeat of the Crimean operation, Russian troops can enter the Lugansk, Donetsk and Kharkov regions under the pretext of protecting the local Russian population, the author believes. The occupation of the strategically important Donbass and the second largest city of Ukraine, Kharkiv, will give Russia new leverage, since it can either join these territories or return them as a result of an agreement on turning Ukraine into a federal state.

Such an operation would be a clear violation of the norms of international law and generate a strong negative reaction even among the few Russian allies. However, this side effect can be minimized to some extent by using the local paramilitary militia in tandem with the Russian special forces. This will create confusion and confusion on the ground. And this tactic has already been used in the Crimea, the article says.

Russia may also intend to seize the entire south-eastern Ukraine for several reasons. It will be very Putin-like: in retaliation for wounded pride, to deprive the remnants of Ukraine of access to the Black Sea. In addition, this strategy will help solve the infrastructure problems faced by Russia in connection with the annexation of the Crimea, writes Sautin.

Russia does not need to seize the whole country in order to achieve its obvious strategic goals. The concentration of troops near Chernigov indicates that Russia may decide to use the factor of tactical and strategic surprise, and instead of invading the pro-Russian territory in the southeast, which many expect, will march to Kiev - the most direct route. According to American estimates, Russia can achieve its military goals in a matter of days if it starts to act without warning, the author notes.
A lightning assault on Kiev is likely to destabilize the situation. It will show the Ukrainian people that their government is powerless in front of Russian power, and will demonstrate once and for all that NATO will not come to its rescue. The Ukrainian political elite, who have learned well how to be a flippant and “cooperate” with the Russians, will be forced to agree to a proposal for federalization at gunpoint. The Euromaidan movement may lose its middle-class centrist supporters, who will come to the conclusion that their struggle was in vain, the publication said.

“The events unfolding in Donetsk and throughout Eastern Ukraine are very similar to those that led to the Russian annexation of the Crimea,” the New York Times editorial said. “Pro-Russian separatists” in Donetsk “thoroughly follow the script written in Crimea,” the authors believe. 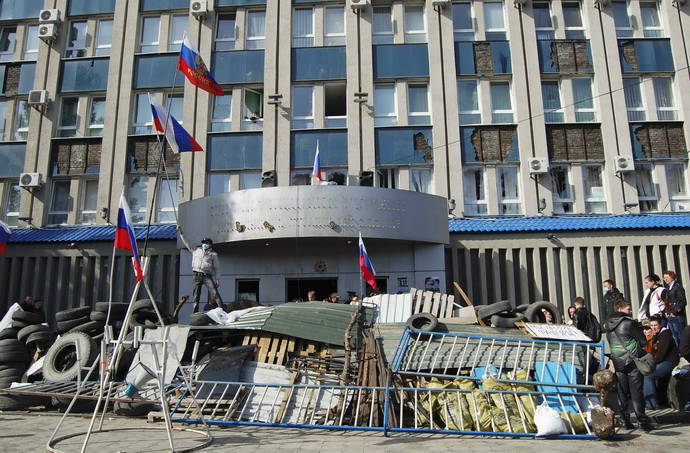 “Perhaps the separatist unrest in Donetsk and other places is intended to force Kiev to conclude an agreement acceptable for Moscow [on the federalization of Ukraine and its refusal to join NATO],” admits The New York Times. However, even Vladimir Putin, as stated below, “may not be able to control the passions,” which he “awakened”. “It’s easy to imagine how separatist demands in Donetsk, Kharkov, or Lugansk translate into violence, forcing Putin to keep his promise to“ protect ”the Russians in Ukraine (or giving him a reason to do it).”

Putin should understand that the invasion of Ukraine will cost much more than the Crimean putsch, and this price will result in damage to the already subsiding Russian economy, and in the new cold war, which undoubtedly will follow, the newspaper predicts.

According to British experts from the Royal Joint Institute for Defense Studies (RUSI), May will be a critical period for Russia's actions in Ukraine. Based on a variety of factors, the think tank offers four scenarios of a possible Russian invasion, reports Le Figaro journalist Alain Barluet.

The girl gets a Russian passport in Simferopol. Reuters Photos

According to RUSI, Russia concentrated along the northern border of Ukraine for the length from Kiev to Kharkov four military groups with a total of 50 thousand people.

The first scenario proposed by analysts provides for a brief demonstration of power in order to force Ukraine and the world community to accept the loss of Crimea as a fait accompli, the article says.

The second scenario assumes the actions of the Russian forces in the South-East of Ukraine to incite unrest. They will serve as a pretext for the opening of the corridor between the Crimea and Donetsk, which will be de facto annexed.

“The third scenario, the expansion of the previous one, will allow the pro-Russian movement to split the country in two, and the Russian-speaking South and East will become part of an education comparable to the Bosnian Serbian Republic,” writes the journalist.

“According to the fourth scenario, Russian troops will make a strategic maneuver to create a corridor connecting Transnistria and the Crimea,” the author continues.

“This arc, outlining the“ new Russian territory ”, will change the map of the Black Sea and will become a fundamental challenge for the European order,” Barluje quotes a warning from RUSI.

Faced with local attempts to putches, the legal authorities of Ukraine must simultaneously demonstrate their firmness and flexibility, according to the editorial article The Globe and Mail, entitled "Don't fall for Putin, Ukraine." 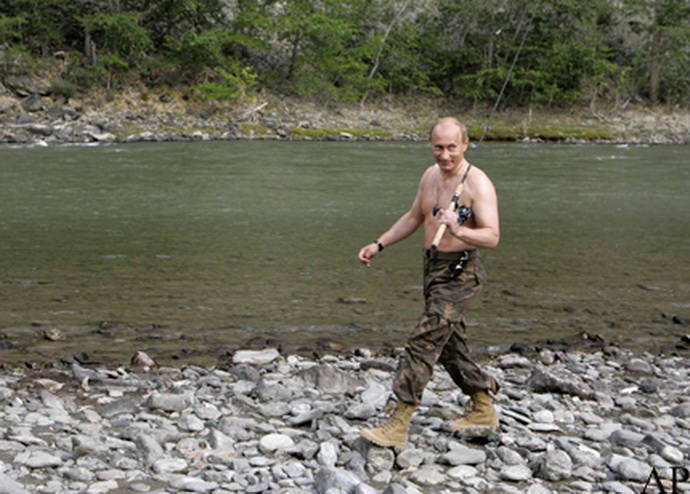 To respond to force with excessive force means to play into the hands of Vladimir Putin. He expects a heavyweight response, which he can use as a pretext for sending Russian troops, the publication notes.

In February, the Ukrainian parliament voted to abolish official bilingualism in the south-eastern regions. Fortunately, the newspaper writes, the acting president Alexander Turchinov put a veto on the bill.

“The Kiev government should continue to show respect for the Russian-speaking citizens of Ukraine,” recommends The Globe and Mail. - Kiev leads the hardest chess game with Moscow, and Russia has more pieces on the board. To win, the Ukrainian government must not fall into the traps of Moscow. ”

Ctrl Enter
Noticed oshЫbku Highlight text and press. Ctrl + Enter
We are
Why Odessa is not DonbassHope for Putin, but do not make it !!!
Military Reviewin Yandex News
Military Reviewin Google News
129 comments
Information
Dear reader, to leave comments on the publication, you must sign in.