"Vladimir Putin is a crusader?" 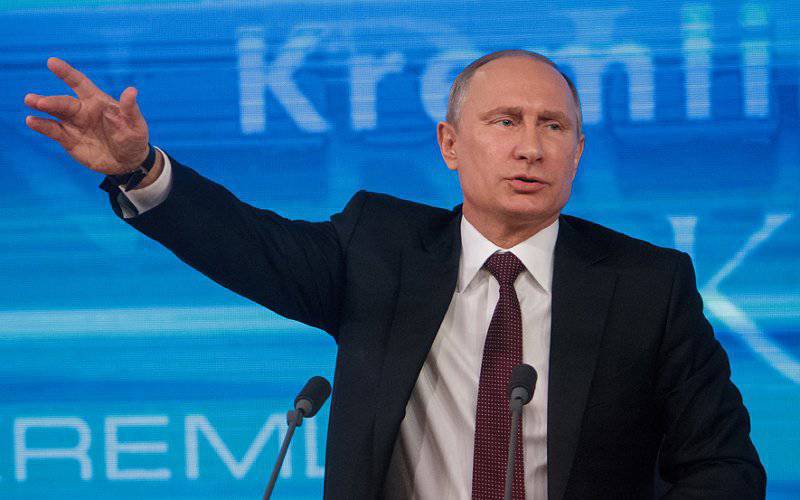 In the war of cultures for the future of humanity, Putin firmly and confidently hoisted the Russian flag on the side of traditional Christianity

Patrick J. Buchanan - famous American conservative politician, in 1969-2000. - The ideologist of the extreme right faction of the Republican Party. Run for US presidential candidates in 1992 and 1996. from the Republican Party and in 2000 - from the Reform Party. The author of the book "Death of the West", "Suicide superpower. Will America live to see 2025? ”And others.

Arguing in defense of the annexation of the Crimea, Vladimir Putin, even before the enumeration of battles on the Crimean land, in which the blood of the Russian people was shed, spoke about a more ancient connection.

Crimea, Putin said, is the place in which “ancient Chersonesos is located, where holy Prince Vladimir was baptized. His spiritual feat - appeal to Orthodoxy - predetermined a common cultural, value, civilizational basis that unites the peoples of Russia, Ukraine and Belarus. ”

Russia is a Christian country, Putin said. This statement by the former KGB chief echoes in some way his December address, in which he stated that Russia opposes the decadence of the West: “We see how many Euro-Atlantic countries have actually taken the path of abandoning their roots, including Christian values ​​that form the basis of Western civilization. Moral principles and any traditional identity are denied: national, cultural, religious or even sexual. A policy is being pursued that puts on one level a large family and a same-sex partnership, faith in God, or faith in Satan. This is a direct path to degradation. ”

Have you heard that at least one Western leader has been saying this lately?

Sentencing the "Bolsheviks", who gave the Crimea to Ukraine, Putin said: "God is their judge." What's happening? Marxism-Leninism is a dead faith, and Putin says that a new ideological struggle is taking place today between the corrupted West led by the USA and the world of traditionalism, which Russia would lead with great pride. In the new war of convictions and beliefs, says Putin, Russia is on the side of God. And the West is Gomorrah.

Western leaders, comparing Putin's annexation of Crimea with the Hitler's Anschluss of Austria and calling him a “KGB thug”, “an alleged thief, liar and murderer who rules Russia” (these are the words of Holman Jenkins on the Wall Street Journal) that Putin’s claim to higher moral positions is even more than blasphemy.

But Vladimir Putin knows exactly what he is doing, and his new statements and claims have a very respectable origin. Former communist Whittaker Chambers, who exposed Alger Hiss as a Soviet agent, wrote a book about “the third Rome” at the end of his life. The first Rome is the holy city and center of Christianity, which fell at the feet of Odoacer and his barbarians in 476 BC. er The second Rome was Byzantine Constantinople (present-day Istanbul), captured in 1453 by the Turks. The successor of Byzantium, the third and last Rome for the adherents of the old faith was Moscow.

Putin is trying to show that Moscow is the righteous city of modern times, as well as the center of resistance to counter-reformism to the new paganism. Putin is connecting to the most powerful currents of the modern world. And this is manifested not only in his open disobedience to what a large part of our world regards as an impudent aspiration of America to world hegemony. He draws strength not only in his desire to protect the kinship of the blood of Russian tribesmen who remained outside of Russia during the collapse of the USSR, but also in the worldwide disgust and resistance to the sewage of the hedonistic secular social revolution that is floating from the West.

In the war of cultures for the future of mankind, Putin firmly and confidently hoisted the Russian flag on the side of traditional Christianity. In his recent speeches, there are echoes of the declarations of John Paul II, who, in his encyclical Evangelium Vitae (“Gospel of Life”) in 1995, subjected the West to severe criticism for its worship of the “culture of death”.

What did Pope John Paul mean when he spoke of crimes against morality? The capitulation of the West before the sexual revolution with its simplicity of divorce, widespread sexual promiscuity, pornography, homosexuality, feminism, abortion, same-sex marriage, euthanasia, suicide with the assistance of other people and the replacement of Christian values ​​with Hollywood values.

Washington Post commentator Anne Appbaaum (Anne Applebaum) writes that he was dumbfounded when he heard in Tbilisi the words of a Georgian lawyer who said about the pro-Western regime of Mikhail Saakashvili: "They were LGBT."

“It was a moment of revelation,” wrote Appelbaum. Fear and aversion to the pandemic of same-sex marriage has become global. In Paris, an angry protest of the “moral majority” took place, in which a million people took part. Masha Gessen, who wrote a book about Putin, said this in his last two years in power: "Russia is becoming the leader of the anti-Western world."

But in the war with the West do not explode missiles. This is a cultural, social and moral war, in which the mission of Russia, according to Putin, is to “prevent the movement back and down, to chaotic darkness, to return to the primitive state.”

What is this if not “chaotic darkness” and “primitive state” before the Savior came to the world? I was amazed when I read in the newsletter of the World Congress of Families for January and December that out of the ten best trends in the world for 2013, the main one is “making Russia the leader in the struggle to preserve the family”. In 2013, the Kremlin banned the promotion of homosexuality, the promotion of abortion, abortion after 12 weeks of pregnancy, and the ban on blasphemous insults of believers.

Will Putin deliver the main report there? On which side is God now in this new ideological cold war?

Ctrl Enter
Noticed oshЫbku Highlight text and press. Ctrl + Enter
We are
Who owns the energy - he owns the worldWhat ships of the Ukrainian Navy raised the flag of St. Andrew (photo review)
Military Reviewin Yandex News
Military Reviewin Google News
104 comments
Information
Dear reader, to leave comments on the publication, you must sign in.