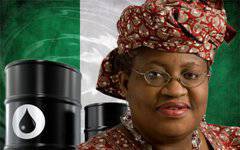 "State-gas station" showed that it can not only pump oil, but also carry out economic reforms


Lay the red carpet, bring flowers, play the carcass: meet the new world leader in economic growth! Now it is Nigeria. Last year, it almost doubled GDP: it added as much as 89%. China has lagged behind so that it seems a little black dot somewhere behind her back. Thus, Nigeria became the largest economy in Africa (510 billion dollars), ahead of South Africa and jumping from 33-th place in the world immediately to 26-e. A little more, and a place in the "big twenty" is provided.

All, of course, have already guessed that this transcendental growth can only be given on paper - which, in fact, happened. But we are not talking about deception or vain trickery: Nigeria, as it was advised by the UN for a long time, finally fixed the methodology for calculating GDP. The Nigerian authorities, with the participation of independent auditors and analysts scrupulously recounted it for many months, and it was clear that there would be a leap. Experts were waiting for a breakthrough in 45 and even in 60%, which, given a similar recount, four years ago was issued by Ghana. But the result of Nigerians was a record and exceeded all expectations.

Usually, the method of calculating GDP is adjusted about once every three years in order to take into account changes both in the volume and in the structure of the economy. The IMF recommends changing the base year from which the count is taken every five years. Nigeria has done nothing of the kind since 1990. He was taken as a base: The National Bureau of Statistics assessed the country's economy as if prices, and with them the profits of producers, did not grow at all (!) 23 of the year. The agency took the 2010 year as the new benchmark.

The number of sectors of the economy immediately increased: there used to be 33 before them, now 46. Sectors that were not previously reflected in statistics or simply did not exist, but appeared as a result of reforms, were taken into account. This is primarily air travel, mobile communications and information technology, online shopping, the music industry and the cinema. Yes, do not laugh, and the movie: the prolific Nigerian film industry, the so-called Nollywood, thanks to 6 turnover of billions of dollars, now provides 1,2% of GDP. Previously, its contribution to the economy was considered zero. In the nineties, there was one telephone company in Nigeria with 300 000 subscribers and one airline. Now there are a dozen of those and others, and there are tens of millions of mobile subscribers and passengers.

Many observers, including the Nigerian ones, called the conversion of GDP a dummy, the vanity of the government. But the authorities of the supertasks did not set themselves: they only cleaned the Augean stables of statistics. One of the organizers of the recalculation, Finance Minister Ngozi Okonjo-Iweala (in 2012, she was nominated for the presidency of the World Bank), openly warned: the result will be “purely psychological” because the government needs real paper quality and quality growth. Although the World Bank’s Nigeria scale is now a middle-income, not low-income country, 170’s millions of its inhabitants have not become richer from reform. Nevertheless, there is a practical benefit from the recalculation.

It will surely attract even more foreign investors, which are very supportive of Nigeria. The ratio of public debt and GDP in one fell swoop fell from 19 to 11%. An increase in credit ratings is not far off, and the growth of investments in Nigerian debt securities has already been recorded. Yes, and wipe the nose of the Republic of South Africa, the eternal political rival and economic competitor, is always nice. A small detail: when in January Nigerians knocked out South Africans from the African Cup, in South Africa it was perceived as a terrible humiliation and almost a national tragedy.

Yet, South Africa, whose economy remains the benchmark for the Black Continent, is very far from Nigeria. Up to 70% of its budget revenues and 20% of GDP, oil still provides. Here political instability and disgusting roads, and the quality of medicine and education is alarmingly low. Electricity in many areas is a pleasant surprise, but not the norm of life: even by African standards there is a terrible electricity supply. Let the richest African and is now listed in Nigeria (this is a commodity tycoon Aliko Dangote with a fortune of 25 billion dollars), the country is among the leaders in property inequality. Corruption is eating away at Nigeria, although over the past twenty years much has been done to eradicate it. At least, entering the country now, you do not start paying bribes right at the airport.

Although the Nigerian stock market has grown to 80 billion dollars, this is only one fifth of the value of securities listed on the stock exchange in South Africa. Per capita income in South Africa, where the population is three times smaller, is almost three times ahead of Nigerian. The standard of living there is incomparably higher, despite the gains of the victorious Mandelism, and the economy is more balanced. How sarcastically tweeted in response to the Nigerian news one high-ranking South African diplomat, “but here we have a light.”

Yet Nigeria is not discouraged: it is catching up and modernizing. With stable 6% economic growth per year, non-oil sectors grow on average by 8%. In an attempt to dislodge the petrodollar needle, the government is actively developing its own industry (for example, the pharmaceutical industry), instead of mindlessly importing foreign goods. A gradual increase in the middle class is turning a densely populated country into an attractive market, and the business capital Lagos is being built up with modern high-rises. If on the most backward continent of the planet there are contenders for the title of "African China", then Nigeria is clearly the most visible of them.

Ctrl Enter
Noticed oshЫbku Highlight text and press. Ctrl + Enter
We are
About Stalin and KhrushchevWhat you didn't want to know about England
Military Reviewin Yandex News
Military Reviewin Google News
40 comments
Information
Dear reader, to leave comments on the publication, you must sign in.