There is no third: the Ukrainian South-East will either be with Russia or will drown in blood 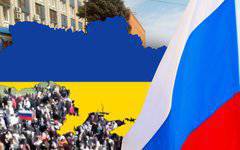 Vladimir Putin will have to make a difficult but fateful decision


Did not become the Ukrainian (so far Ukrainian) South-East to wait for the elections of 25 in May. Even despite the presence in the list of candidates of such a character as Oleg Tsarev, who is among the supporters of the pro-Russian vector is considered to be his board. The white envy of Crimeans is so strong, the distrust of the Kiev authorities is so great, which, of course, will not leave any candidate a chance who at least, let's say, for the order, suddenly remembers that historically Sevastopol is no Ukraine ...

Boiling hot. “Boiled” before: the regional administrations in the Ukrainian regions adjacent to Russia were previously captured by pro-Russian activists, but were relatively easily released by the Ukrainian police, and the SBU regularly conducted criminal proceedings against the “separatists”.

But something yesterday suddenly went wrong according to the scenario that was made for the junta, and the Kiev authorities could not “quickly resolve the conflict”. As a result, the Donetsk People's Republic was established. And a declaration was immediately adopted, an excerpt from which was given by Interfax: “On behalf of the people of the Donetsk People’s Republic, only the Supreme Soviet of the republic can speak. The most important state issues related to the development of the republic, its relations with other states are submitted for a nationwide discussion or referendum. ”

Such a mocking parody of maydanschikov, who, having seized all key government bodies in Kiev, also decided that henceforth the power in Ukraine was for the people who are represented in the Verkhovna Rada. In which, by the way, not everything seems like the pro-Russian deputies reacted to the Donetsk initiative with understanding. So, even on the eve of the establishment of the Donetsk People's Republic in an interview with KM.RU, the prominent Donetsk “regional” Nikolay Levchenko called on the countrymen to “not expose” him with his colleagues, who, they say, plan to resolve the issue thoughtfully and legitimately.

“Criminal cases will open against you, you will be prosecuted. We are working to ensure that your requirements are met, and we will achieve this. Our primary task is to hold fair elections in the legal field, to legally remove the current government and establish a legitimate, truly elected power by the people, ”the parliamentarian dictated to our correspondent. But the further development of events is more likely an occasion for the “regionals” themselves to think hard about what has happened in the last weeks or months, that the South-East treats their words as a worthless informational garbage.

The head of the Russian community of Ukraine Konstantin Shurov noted Russia's special mission in the further development of events in the South-East of Ukraine:

- It seems that the process of further crushing Ukraine has become irreversible. After the events in Crimea, the current authorities settled in Kiev did not draw the right conclusions and did not realize that people no longer want to live in the conditions offered to them and with such national oppression and humiliation that, again, they don’t want Ukraine to turn into nazi state.

The current Ukrainian leadership has come to power illegitimately, ousting the legitimate president Viktor Yanukovych from Ukraine, but at the same time he considers himself entitled, having a snack, to bet on force and intimidation of the population. So what result did they ultimately expect?

Unfortunately, that part of the quasi-elite that is today in power, as well as the remaining quasi-elite, is very, very poorly known history its own land. And this only means that everything for them in this story will end very badly, although, I am sure, the people themselves will feel at the same time a better life.

It remains the only, but very important question: can Russia follow the Crimea in the same format to solve the problem of the Ukrainian Southeast, namely, the Luhansk, Donetsk, and Kharkov regions. And there after, you see, Kherson, Nikolaev, and Odessa will catch up. And there is already Zaporozhye just around the corner ...

This will be a very serious step by the Kremlin. Will Moscow be able to do it, heed the promises that come from there? And the population of the South-East has repeatedly appealed to the Russian authorities. So on behalf of the established Donetsk Republic, as we know, a new one appeared ...

The very fact of the establishment of people's authorities practically leaves no doubt that the South and East have no way back. And there are only two options: either the Russian government de facto recognizes the Crimean version of the development of events and makes the appropriate decision, or the Russian South-East will be filled with blood.

But, be that as it may, the population of Donetsk, Luhansk, Kharkiv and a number of other Ukrainian regions do not want to live under the control of the current Kiev authorities. And if those who are there at the helm of power today do not understand this, then the people are ready to decide their own destiny.

Vladimir Putin, in turn, having said “a” in the history of the Crimea, will inevitably have to say “b”. I repeat, there is no other choice left: after all, any step of the Kremlin aimed at curbing the initiative of those who speak on behalf of the Donetsk People’s Republic today will be a fatal mistake. In fact, it will simply untie the hands of those who are ready to pour the Donbas even now. Sloboda, Zaporozhye blood.

Ctrl Enter
Noticed oshЫbku Highlight text and press. Ctrl + Enter
We are
A great interview with Sergey Lavrov: about Ukraine, Obama and IranWhat you didn't want to know about England
Military Reviewin Yandex News
Military Reviewin Google News
194 comments
Information
Dear reader, to leave comments on the publication, you must sign in.