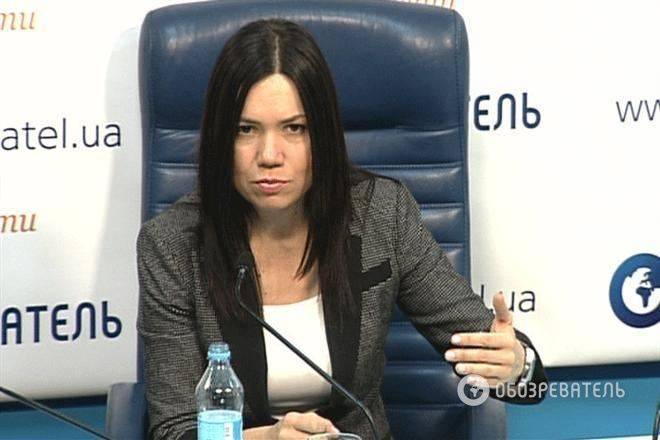 The “cleansing”, “prypushchennya Kubla separatyzmu from the Shkidnom region”, the establishment of long prison terms for “separatism” (the bill “Batkivschiny”) - this is the “adequate” response of the temporary Kiev authorities to, as they say, “political challenges of revanchists.” The uprising in Donetsk, Lugansk, Kharkov, Nikolaev, in the opinion of those who think that this represents the “central authority”, is a planned action of the Russian special services and a “handful of extremists”. "In Donetsk, those who seized the building of the regional administration are clearly divided into two groups: the officers of the special services of Russia and their aggressive minions hired for big money."

This is a literal quote from a speech on a leather couch at the Yulia Tymoshenko airport in Donetsk. Who wants (if not disdain), can find an entry in the "U-tube". She is sitting there, and in the foreground are the crooked legs of her press secretary. Of course, everyone had a question: in what status did Tymoshenko come to Donetsk? Why does she hold a meeting with the security forces and give the installation a rigidly suppress the actions of the "separatists"? By status, she is the leader of the Batkivshchyna party and a presidential candidate. This does not give her the right to interfere in the activities of the authorities of Donetsk. But Yulia Vladimirovna frankly spits on such “trifles”.

Today it becomes absolutely clear that there is no dialogue between the center and the south-eastern regions of the country, and there will not be. Pathetic attempts to portray a kind of “consideration of the opinions of territorial communities” have long been in the past. Instead of granting Russian the state status - “dust on the molars” in the figurative expression of the possessed Farion. Instead of constitutional reform extending the rights of regions, sending cops to these regions from Western racially correct areas, reinforced by militants from the Right Sector, forming punitive Nazi Guard detachments that are also being transferred to hot spots. Instead of recognizing the existence of a different point of view - turning off Russian TV channels and turning central television into one continuous “zomboyaschik” with a standard set of propaganda plots.

They made it clear that they did not want to hear the southeast, which they consider to be a “hotbed of separatism” to be cleaned up immediately. Only they have the right to carry out a coup d'etat with the direct support of the United States and the European Union. All others who disagree are cattle, subject to racial filtration. You see how they peresel (sorry for the non-parliamentary expression) after the citizens of Ukraine stormed a number of administrations and buildings of the SBU.

It is the citizens of Ukraine, since even the Ministry of Internal Affairs recognized that among those detained during the "sweeping" of the Kharkiv Regional Administration (70 activists) are mostly residents of the city of Kharkov. They sent all the "siloviks" to the rebellious regions with one single purpose: to crush, intimidate, disperse, kneel down. Is this “readiness for dialogue” about the future of the country? Do they think that with the help of the banner “Edina Krajina” and tearful stories about the genealogical tree of some TV presenters, all problems will resolve? This will not happen. The guys from Kharkov demonstrated that they just do not give up. They went on an assault over and over again, set fire to the building, and fought. In Donetsk, the special forces who arrived from Kiev do not dare to go on the assault. Because he understands: everything is much more serious there. And it's not just about weapons. The whole area will rise. The same is in Lugansk. Lyashko already felt on himself that they would beat, and very quickly made legs out of it. Please note: none of the presidential candidates met with the people of the southeast. The same Tymoshenko only threw a hysteria to the security forces and held a press conference for racially correct journalists. They understand that they will be sent. Immediately and far. And the point is not in the Russian special services, but in the mood of the people.

Having chosen a policy of violent suppression of the protests, they have already provoked a civil war. They mockingly call the people of Donetsk “a new nation with the forty-eighth chromosome” (Bryginets). They openly call for the destruction of the inhabitants of the south-east. Oh, how Syumar rejoices in his cozy place: “They just reported that the building of the SBU in Donetsk was cleared of bastards, hurray !!!”. This is the Deputy Secretary of the National Security Council, if someone does not know. April 8 The Verkhovna Rada adopts a law to strengthen responsibility for encroachment on the territorial integrity of the country. Dates from three to fifteen years. They are scared. After the Crimea left for free swimming, the temporary Kiev authorities walk in diapers and think with fear that they will soon have to answer for everything. In Kiev, chaos, since the “hundreds”, “pravoseki” and other “Maidan heroes” armed to the teeth, openly beat the judges, line up in front of BP, marauding and racketeering. This is presented as the highest manifestation of democracy. Today, their main goal is to hold presidential elections at any cost. However, after April 6 elections in Ukraine can not be held. You can only imitate the electoral process. But even before the vote, most likely, it will not come. Judging by how rapidly the situation is developing, in the near future we will have a completely different reality. You can, of course, pretend that the situation in Lugansk, Kharkiv and Donetsk is under control. You can increase the repression, arrest activists, plant them for long periods. Repeat exactly the opposite of all the actions of the former regime. Only here there is one problem: there is no Maidan that needs to be overclocked. There are a dozen megalopolises that no longer obey the central government. And where no presidential candidate will stick his nose. How do you order them to clean? To declare all the separatists and shoot every fifth? To conduct an exam on the knowledge of the Ukrainian language and the special, racially correct version stories with the subsequent defeat in the rights of those who fail to pass this test? Temporary power will not conduct a dialogue with their opponents. The April 6 uprising is only an episode in a long and difficult story. However, the general vector of development of the situation has already been set. Southeast left no way out: either clearing for separatism, or the voluntary recognition of all residents racially inferior. How this all ends is quite understandable.

Ctrl Enter
Noticed oshЫbku Highlight text and press. Ctrl + Enter
We are
A great interview with Sergey Lavrov: about Ukraine, Obama and IranHow can Russia survive and win in the 21st century?
Military Reviewin Yandex News
Military Reviewin Google News
135 comments
Information
Dear reader, to leave comments on the publication, you must sign in.