The temporarily frozen conflicts in Transnistria, Abkhazia, South Ossetia and the Crimea are a kind of test of NATO’s ability to bring security to the region. Today there is no other answer for stability in Europe, besides adapting the capabilities of the North Atlantic alliance to counter threats in these regions. 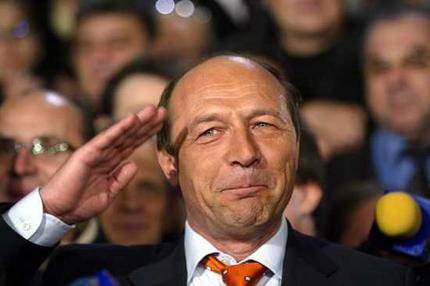 This frank appeal of the Romanian president to the NATO leadership to decide on military intervention in the mentioned republics, one of which is generally part of Russia, sounded against the background of the ongoing Ukrainian conflict. In fact, the head of Romania says that without the intervention of NATO, Europe today can no longer expand its “values” into new and new territories. They say that it is no longer possible to impose European "values" on the East in a "diplomatic" way - we need military support. This is the question of the declared European pacifism ...

So, Romania, in fact, openly calls on NATO to intervene in a situation in which neither the European Union nor, in fact, the North Atlantic Alliance has anything to do with.

In such a situation, the question of the status of Transnistria is even more acute. In Tiraspol, they understand that if the NATO top, heeding the words of Basescu and other European politicians declaring similar theses (the Lithuanian heads Grybauskaite, for example), will really be going to send their “limited” contingent to the same Moldova, this will mean only one thing: taking measures to eliminate such an administrative entity as the Pridnestrovskaia Moldavskaia Respublika.

Over the past few years, Transnistrian residents have stated that if official Chisinau, with the support of European “diplomacy”, managed to squeeze out Russian peacekeepers from the territory of their republic, then a “sweep” would have been done a long time ago at the Transnistrian Republic — all those who disagree with the interests of the official Moldovan authorities would expect an unenviable fate for the forced "loyalization" of Chisinau.

In Moldova itself, these conversations are called in no way connected with reality, but in the meantime, Chisinau continues to strengthen the border with Transnistria: arranging the so-called migration points with special equipment for pass control. In addition, in Moldova there are attention: excise taxes on IMPORT of Transnistrian products! You must admit that it is more than a strange practice for a state whose authorities declare a commitment to respect the opinions of peoples and state unity. What a unity, when the central government itself does everything to disassociate itself from the TMR and to arrange a real blockade for the republic. The President of the Pridnestrovskaia Moldavskaia Respublika Yevgeny Shevchuk drew attention to this oddity of the Moldovan authorities, stating that Moldova equips the independence of the PMR with its economic actions by arranging the Moldovan-Transdniestrian border.

Today, the blockade of Transnistria is not an empty sound. The blocking of the territory of the PMR is also being carried out by new “authorities” of Ukraine. Apparently, the inability to restore constitutional order in their country (although what kind of a Constitution can be talked about, if the new “authorities” themselves came to their current offices on the wave of an unconstitutional coup d'état) pushes Kiev to restore its wounded pride in neighboring territories.

At the end of last week, the head of the Transnistrian Foreign Ministry Nina Shtanski and the Russian ambassador to the Republic of Moldova Farit Mukhametshin shared a checkpoint at the border with Ukraine (the Pervomaisk Chamber of Commerce and Industry). According to the border service, the volume of cargo and passenger traffic through the Pervomaisk Chamber of Commerce and Industry from Transnistria to the territory of Ukraine and vice versa has significantly decreased. On his page on the social network, the Minister of Foreign Affairs of the PMR, Nina Shtanski, writes that the passenger traffic in the first quarter of 2014 of the year turned out to be less than 231779 than in the same period of 2013. The number of units of transport that crossed the border in the first quarter of 2014 of the year was almost 79000 less than in the 1 quarter of last year. Obviously, for the economies of both the PMR and Ukraine, this state of affairs is equivalent to huge economic losses. This loss is especially evident for the Pridnestrovian Moldavian Republic, the economy of which is closely connected, first of all, with the Russian one. 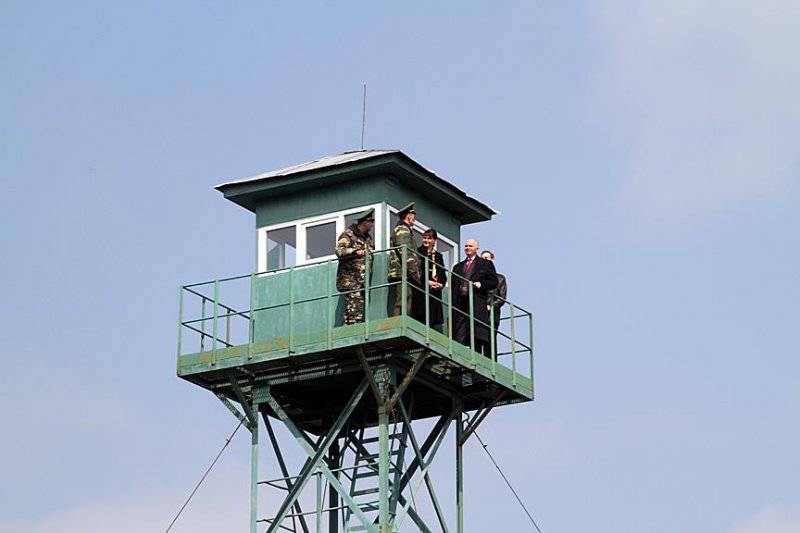 In the old days, arriving there, you rarely find a long line of cars there.
The border guards kindly gave us the opportunity to climb the tower. Review, I must confess to you, enviable! Along the border line cows quietly graze. There were no armed Transnistrian groups or any other groups on the Transnistrian side, there is no military equipment. Border guards are in service as usual.
But right behind the Ukrainian line, a tent military camp was seen, which was broken up close to the admin offices, the smoke of the field kitchen was carried to the sky. Border guards are armed with Kalashnikov assault rifles, wearing body armor.

From these words it follows that the actions of the Ukrainian side today are one of the reasons that Transnistria has fallen into the clutches of the real blockade itself. On the one hand - the official Chisinau, rushing, barely holding holes in the holes in the EU, on the other hand - Kiev self-proclaimed power, trying to recoup its own mediocre policy towards the Crimea on the inhabitants of Transnistria.

In the current situation around the PMR, the President of the Republic, Yevgeny Shevchuk, officially addressed the Moldovan authorities with a proposal, quotation: “civilized divorce”. This edition writes "TVNZ" and a number of other sources. The essence of the proposal is that Chisinau needs to go to a simple and final step in the endless confrontation with Tiraspol: to recognize the results of the referendum in the MRT, that is, to recognize the independence of Transnistria, and after that Moldova without PMR can go where it wants, and it wants EU ...

This will open a new kind of cooperation with Moldova. Fatigue from survival has accumulated, the way to the exit is - this is our faith!

The President of the PMR recalled the positive of such actions, which showed itself in the Czech Republic and Slovakia, Norway and Sweden.
Of course, this is a way out of this situation. But only Chisinau is clearly not going to (at least today). He simply will not be allowed to take this step by the "friends of Moldova" from the West. The West’s current uncertain status of Transnistria is more to the point. Why? Because the geographical location of the pro-Russian Transnistria - finding it between the rushing to plunge headlong into the western "values" of Moldova and Ukraine - is a trap into which the West may well try to lure Russia today.

Europe is not so interested in Transdniestria itself, as it is interesting to use it for provocations against Russia. Provocation can be traced right now: the blockade of the republic - and there is the option of trying to put pressure on the Russian Federation and force it to take ill-considered steps. And the words of the Romanian President Basescu that NATO should “bring security” to the region is another provocative point aimed at dragging Russia into a protracted and more than serious conflict.

What should be the actions of Russia in this situation? Naturally, it is impossible not to succumb to provocations, but to try to maintain constructive cooperation with Transnistria, using all possible channels, because it is simply impossible to reconcile with the economic and transport blockade of the republic, in which about a third of the population are ethnic Russians. It is necessary to continue to defend the interests of Transnistrian residents, in no case thinking about the withdrawal of the peacekeeping contingent, and such “ultimatums” are often allowed by Moldovan authorities to put themselves. The Russian presence, including in the form of peacekeeping forces, in the region is what is the real guarantee of security on the banks of the Dniester. And hello to Basescu! ..

Ctrl Enter
Noticed oshЫbku Highlight text and press. Ctrl + Enter
We are
Attach Moldavia to Romania so that it “does not suffer”There are more Romanians in the world than Moldovans and Ukrainians think
Military Reviewin Yandex News
Military Reviewin Google News
70 comments
Information
Dear reader, to leave comments on the publication, you must sign in.