From the series "Leaders of the Maidan." Avakovshchina

April 9 2014
45
Kharkov night was infinitely long. The boorish, brutal, ordered and generously paid aggression of the pro-Russian "protesters" was prohibitive. The RSA building, being held back from the separatist attacks all previous day, was set on fire from the hall. Soldiers of the National Guard under attack attacked with stun grenades. By guarded without weapons divisions of the Ministry of Internal Affairs (it is used lowercase letters - note. "IN") was fired from a traumatic weapon.

Separatists and provocateurs - a tough response, as he wrote earlier, will be irreversible. So, as in the photo that I will post in the comments - it will be with every enemy of Ukraine! To each his own. Everyone chooses. We are a new team that has come to the Ministry of Internal Affairs (already in capital letters - note “IN”) - we choose to guard the integrity and independence of Ukraine. Glory to Ukraine!

We guess from three attempts, who writes? Although why guess - writes “the most important” in the internal affairs of Ukraine, Mr. Avakov, who also performs the duties of an advanced Ukrainian blogger, carrying his thought through Facebook. It is in this social network that Arsen Borisovich, one of the richest people in Ukraine (118 line in the Forbes rating), told the world what "nonhumans" gathered in Kharkov and other regions of the country's southeast to "go against the state."

Now, if you did not know how Mr. Avakov found himself in his current chair, then one would think that Arsen Borisovich is a crystal honest politician who stands for constitutional order in Ukraine, for observance and control over the observance of Ukrainian legislation. But the problem is that everyone is well aware of the method by which Avakov and all his current colleagues came to power. The method, as is well known, is the following: chaos, blood, the use of radicals and extremists for their own purposes, a series of provocations, information war, financing, including for foreign funds, of extremist groups and permanently or systematically rally participants. 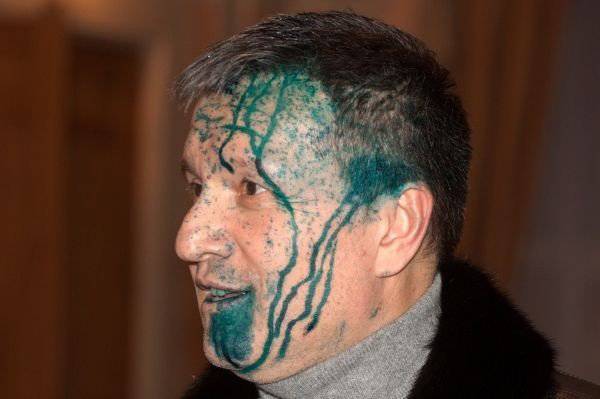 And now Mr. “Minister”, demonstrating his “constitutional commitment”, calls the people in the south-eastern regions of Ukraine, who came out for a rally against all this avakovshchiny, Turchynovism, against the dictatorship of the Pravosek paralegk, as well as separatists and provocateurs, and promises to all almost fiery hell. This is not even double standards, it is something from the field of psychiatry. From real psychiatry.

That is, the seizure of administrative buildings in Kiev, tents in its central squares, young and middle-aged people in masks is a popular revolution that leads Ukraine to the rivers of milk and milk and honey, and the seizure of administrative buildings in Kharkov, Lugansk, Donetsk, tents in these cities , masked men here are provocations and extremism ...

How convenient, Mr. Avakov - is not it? In this regard, it is fit to amend the Criminal Code of Ukraine, which may look like this: if a crime is committed by supporters of Kiev Maidan, then this is not a crime, but an all-Ukrainian good. If anyone in Ukraine has an opinion that goes against the interests of the Maidan, then this is the most terrible crime. SEPARATISM is called ... He came to the square, shouted that Avakov and all Kiev authorities are liars and impostors - everything is already a separatist, and called on local authorities to take into account the interests of the people - a separatist in the square ...

From the point of view of modern psychiatry, this behavior is called a derivative of mental ambivalence. A person is ready to worship or follow something today, and tomorrow exactly the same thing he perceives as a true evil. And the new “authorities” of Ukraine, apparently, have a real epidemic of this very derivative of mental ambivalence. They really worship the Kiev scenario, and the Kharkiv (Donetsk, Lugansk) scenario causes them to have extremely negative reactions, although the processes from the point of view of the methods used are almost almost “copy-paste”. Moreover, in Kharkov and Donetsk, the protesters did not gouge out the people and did not burn the people with Molotov cocktails, but in Kiev they punched and burned them.
The thesis about the epidemic among the new “All-Ukrainian” officials is confirmed by such gentlemen as Arseniy Yatsenyuk and Oleksandr Turchynov.

Yatsenyuk (at the meeting of the Cabinet of Ministers):

I would like to appeal first of all to all residents of the eastern regions of Ukraine. It is absolutely clear to everyone that the implementation of the anti-Ukrainian, anti-Donetsk, anti-Ugan and anti-Kharkov plan is taking place. A plan to destabilize the situation, a plan whereby foreign troops would cross the border and seize the country’s territory. We will not allow this.

"Destabilization" ... "Capture" ... Yes, sir? And, it turns out, the situation was stabilized with the help of fittings, batons and firearms? And NATO troops to protect the "achievements" of Maidan did not call for intervention? Well ... When the human brain is affected to such an extent that the people who themselves seized power and trampled the constitution of the state and the interests of at least half of the population of the country, these people from politics should be kept at a distance of a cannon shot. But the trouble is that this “dirt from under the nails”, which calls itself patriotic politicians, has come to power over its heads and corpses, and, like any fascist dictatorship, is not going to leave it behind its course.

Ernest Hemingway was truly right when he said:

Fascism is a lie uttered by bandits.

Well, and when fascism is still with such piquancy, as in the video below, it can break out, except: God, save Ukraine from such “authorities” ...