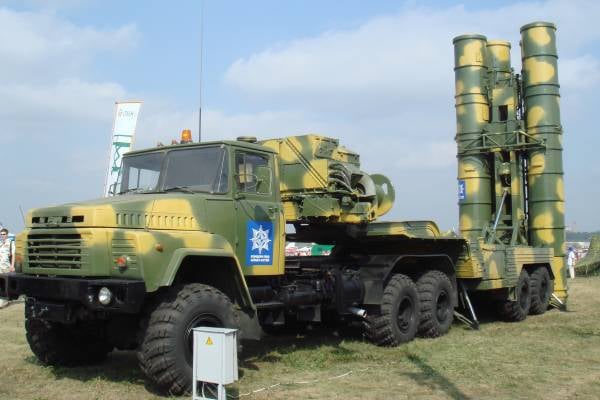 While NATO is talking about the potential for discussing the format of cooperation with Ukraine in the field of missile defense, Russia is beginning to declare the need for Ukraine to join the Russian missile defense system.

As part of the development of the so-called European missile defense system (EuroPRO), Russia can supply the C-300 PMU-2 missile systems to Ukraine, which were previously planned to be exported to Iran. This was stated by the chief editor of the National Defense magazine, the director of the Russian Center for the Analysis of World Trade weapons Igor Korotchenko.

Currently, there are C-300 PMU-2 missile systems in Russia, which were planned to be delivered to Iran. They can be sold to Ukraine, said Korochenko. In his words, for this Ukraine needs to either provide a loan or agree on payment in "live" money. At the same time, the Russian expert estimates the value of this transaction at 800 million dollars.

Moreover, Korotchenko sees the continuation of this contract in the inclusion of Ukraine in the “sector of responsibility” of Russia in the framework of the European missile defense system. “Russia could take responsibility for its European sector of the European missile defense system not only for its territory, but also for the territory of Ukraine and Belarus, and thus be responsible that no rocket from Iran hit the target on the territory of Ukraine,” Russian expert.

According to Korotchenko, Belarus consistently strengthens its capabilities in the field of air defense (AD) and missile defense, and Ukraine is slowing down in this process. He is confident that such negotiations between Russia and Ukraine can have absolutely real results, unlike consultations between Kiev and Brussels, where "there is more political PR and few concrete measures."

This is a joint work on the creation of promising radar facilities, the use of Ukrainian rocket technologies, including the creation of anti-missile systems. The possibilities of Ukraine to create mathematical models for a holistic assessment of the state of missile defense and the effectiveness of its individual elements can also be used.

Now about any results of the meeting between NATO experts and Ukraine in the field of missile defense is not known. Although now we can say that Russia really has a chance to win this kind of unhurried and uninteresting battle for the missile defense of Ukraine.

NATO can not take Ukraine into its system

Ukraine itself through its geopolitical positions is simply doomed to participate in future anti-missile projects in Eurasia. However, in conditions when NATO and Russia are unlikely in the foreseeable future to come to an agreement on the creation of something like a unified system, and continue to develop their own missile defense architecture, Ukraine will again be forced to choose between the two banks. And the choice will not be easy.

NATO is strongly opposed to the participation in the NATO missile defense system of countries that are not members of the alliance. The arguments here are simple: the main principle of the existence of NATO is based on the provision of the 5 article of the Washington Treaty, which establishes collective responsibility for the defense of the members of the alliance. Therefore, they believe in NATO that it is impossible for anyone, for example, Russia or, perhaps, Ukraine, to transfer some of the obligations regarding the collective defense of the alliance in the field of missile defense.

In such circumstances, the direct inclusion of Ukraine in the NATO missile defense system is hardly possible. However, there is still room for maneuver. For example, Ukraine can sign a separate agreement on cooperation in the field of missile defense with NATO, in which the alliance will assume the guarantees of the missile security of Ukrainian territory. And Ukraine, for its part, will offer its own capabilities, which can strengthen the Western missile defense system.

These capabilities are known: a radar early warning of a missile attack in Sevastopol, space technology, modern advances in the development of radar technology. However, these opportunities may significantly increase if Ukraine obtains official status with specific commitments and guarantees on missile defense with NATO. This is especially true of the possibility of basing the sea components of the missile defense in the Black Sea under the Ukrainian flag.

It is easy to integrate with Russia. And what about the EU?

Another option that opens up before Ukraine and which, of course, will be considered by the Ukrainian leadership, is participation in the missile defense system of Russia. After all, the northern neighbor will predictably protest against any "separate" (that is, without the sanction of Moscow) agreements between Ukraine and NATO.

As soon as Russia hears about the possibility of such a deal, the propaganda-diplomatic machine of Russia will sing its usual song about "fraternal friendship." And the strong gas loop, on which the Ukrainian government holds the Russian leadership, will immediately drag on into love spasms.

And, oddly enough, the proposal from Russia regarding missile defense can be more “comfortable” for Ukraine - and not only because this “offer cannot be refused”. Russia, unlike NATO, has a simple approach to drawing up "allied" relations. Anti-missile issues can be another convenient reason to offer your “friendship forever”.

First, Russia’s 5 article is not connected with any allies (the CSTO doesn’t make sense here), and therefore it can include anyone in its missile defense system at any time and in any way. Secondly, the CIS Joint Air Defense System is already in operation, in which Ukraine participates. It remains to simply rename this system into the Joint Missile Defense and Air Defense System of the CIS, and all its participants will automatically be covered with a Russian anti-missile umbrella - well, at least in the international legal sense. Thirdly, it seems that in NATO no one will specifically stand against the inclusion of Ukraine in the Russian missile defense system. In any case, Ukraine will cease to be a “no-man’s” territory through which Iranian missiles can fly.

True, such a scenario does not coincide with the supposedly firm intentions of Ukraine to integrate into the EU. For it will be difficult to imagine a country of the European Union, which is at the same time a full-fledged part of the Russian military system.

It seems, again, the Ukrainian leadership will need to pass a test of "Europeanness." And the missile defense will be the next litmus test of the reality of statements about the desire to join the EU.