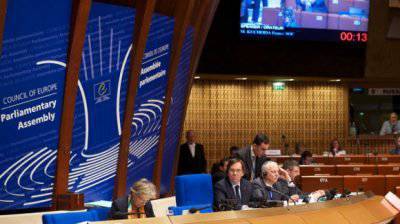 Threats to Russia from the West continue to pour. This time the parliamentarians decided to be different in the PACE (Parliamentary Assembly of the Council of Europe). A deputy from Denmark decided to propose to use sanctions in the form of a revision of the activities of the Russian delegates to PACE and depriving the parliamentary delegation to the PACE of the right to vote against the Russian delegation.
PACE is a deliberative body that, by and large, does not take any important decisions. His main task is to discuss situations in different countries that are members of the Council of Europe and find compromise solutions. In fact, PACE has long been trying to position itself as a repressive body that is trying to settle accounts with those whose position differs from that of European neoliberals. Experienced lawyers who can get advice on the website “West”, they say that they do not carry any legal strike on Russia by the PACE sanctions.
This is confirmed by representatives of the Russian parliamentary delegation to the Parliamentary Assembly of the Council of Europe. According to the Russian MP Leonid Slutsky, any form of sanctions against Russia will lead to the fact that our delegation will simply suspend its participation in PACE meetings. Russia can take this step, even if the sanctions are, as Leonid Slutsky calls them, soft, namely, in the case when the Russian delegation is deprived of only voting rights, but not other powers of the PACE.
Recently, this organization is increasingly trying to teach the Russian authorities what policy to send them. This time the anti-Russian resolution in the PACE is being prepared in connection with the reunification of the Crimea with Russia. Deputies who, by definition, should support democratic values, one of which is the direct will of citizens, are trying once again to denigrate the true meaning of the word "democracy." If PACE considers that the referendum, held crystal-clear (and confirmed by numerous international observers) is undemocratic, then the question arises about their own democracy, about their real commitment to the ideals of democracy. PACE deputies who intend to impose sanctions on Russia, and here they are simply afraid to admit to themselves that they have long been turned into American sixes.
Ctrl Enter
Noticed oshЫbku Highlight text and press. Ctrl + Enter
We are
Alexey Pushkov: The countries that bombed Belgrade and Libya have no right to make decisions on the Russian delegation
Military Reviewin Yandex News
Military Reviewin Google News
110 comments
Information
Dear reader, to leave comments on the publication, you must sign in.