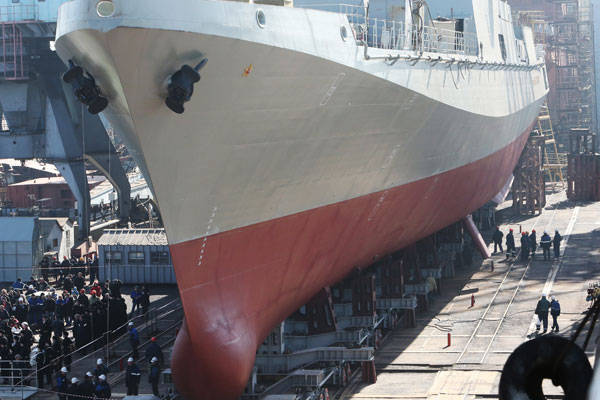 In the next six and a half years, the development of military infrastructure in the Crimea will go according to a plan that Defense Minister Sergei Shoigu discussed today with his generals at an extraordinary board of the department.


This voluminous document is classified as Secret. What army and navy grouping - with its aviation, air defense system, land and ship components - will be created on the peninsula by 2021, the military leaders for obvious reasons do not say. In the presence of journalists, Shoigu only mentioned that the plan provides for equipping formations and units deployed in Crimea with modern weapons and military equipment. The generals synchronize their deliveries to basing places with the preparation of infrastructure for the new arsenal and the tasks that the troops will solve on the peninsula.

It is already known that the Crimean group will be part of the Southern Military District. If we talk about the Black Sea Fleet, then the admirals will finally update its ship composition - which Ukraine had in every way prevented. In two years, naval sailors will receive six new frigates of the 11356 project, ideally suited both for operations on the Black Sea and as part of the Russian Navy's operational compound in the Mediterranean. The ships will be equipped with universal missile and artillery weapons and modern anti-submarine and anti-aircraft radio equipment. The lead frigate "Admiral Grigorovich" has already been launched. Kaliningrad shipbuilders laid four more - "Admiral Essen", "Admiral Makarov", "Admiral Butakov" and "Admiral Istomin". The sixth ship will begin to build this year.

At the same time for the Black Sea fleet make six new diesel-electric submarines of project 636. Two submarines are to replenish the Black Sea Fleet’s combat staff by the New Year, two more by next year, and the rest in 2016. According to some reports, the submarines will be “assigned” to the submarine brigade, which will be based in Sevastopol. Previously, they wanted to place this compound in Novorossiysk.

As for aviation, front-line bombers and reconnaissance aircraft Su-24, amphibious Be-12, combat and transport helicopters are now stationed on the Crimean military airfields at Guards and Kache. There is information that after upgrading the airfield network, Su-27 fighter jets, anti-submarine Tu-142 and Il-38 fighters, as well as Ka-27 and Ka-29 helicopters may additionally be transferred to the peninsula. And in order to protect the Crimea from air strikes, they will create a modern, layered air defense system there.

In parallel with the technical and organizational staffing, the army’s leadership needs to address the social problems of the military personnel stationed in Crimea. And first of all - to think about their resettlement. According to Shoigu, at the beginning of March, 3,5, thousands of our soldiers and officers, needed service and permanent housing on the peninsula. Taking into account the former military personnel of Ukraine, who have concluded a contract with the Ministry of Defense of the Russian Federation, there will be much more waiting lists. So, for the military, it will be necessary to form a housing stock, to seek additional funds for the purchase or construction of apartments.

The second and literally sick problem is the lack of military hospitals and clinics in the Crimea. According to the Defense Ministry, the right to be examined and treated by military doctors will have more than 120 thousand people. On the agenda there is a question, at a minimum, about the overhaul or reconstruction of the army medical institutions on the peninsula. And, perhaps, about building new ones.

At the board, Sergei Shoigu briefly, but quite succinctly, spoke about the role the Armed Forces played in joining the Crimea and Sevastopol to Russia. According to him, the decisive actions of our military were forced by extremists who threatened the lives of the Crimeans. In addition, there was the danger of seizing the infrastructure of the Black Sea Fleet. All this required the strengthening of the protection of army facilities. The Russian military fulfilled its task without violating either the terms of the agreement with Ukraine or the international obligations of the Russian Federation.

And now they do not violate the obligation not to hinder the return of those soldiers and officers who decided to remain in the service in the Ukrainian army. As for their colleagues who are ready to pursue a career in the Armed Forces of Russia, Shoigu promised to do everything necessary for the earliest possible adaptation to the ranks of such people. For a start, the former Ukrainian military will quickly receive Russian citizenship. More than 8 thousands of servicemen handed over documents for processing our passports, 3 thousands have already handed them.

There is one branch of the economy of the Crimea, whose development directly depends on the military department. It is about the enterprises of the radio-electronic, aviation and ship-building industry, as well as the aircraft and ship repair profile. At the direction of the President of the Russian Federation, the Crimean defense industry will be attracted to the fulfillment of contracts of the Ministry of Defense.

- An assessment of their condition has already been carried out and proposals for rational use have been developed, work on re-registration and licensing has been organized jointly with state authorities. The measures taken will allow effective use of the production and technological potential of the defense industry of the Crimea for the realization of the state defense order, - said Sergey Shoigu at the board.