“We appeal to Putin, only in Russia we see protection”

April 8 2014
211
Southeast Ukraine boiled over. Residents of freedom-loving cities (or separatist-minded, in the opinion of the so-called government in Kiev) have finally decided on their future. This definition was made from the very real "bottom", and not from the "top" - that is, it was truly popular. Of course, Kiev did not recognize this will. 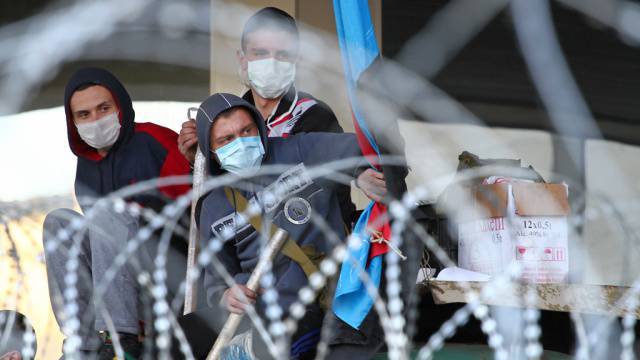 In the evening of April 7, following Donetsk, the creation of a people's republic of Kharkiv was announced. Began popular performances in other cities. As the Russian press notes, in Nikolaev, supporters of federalization clashed with the militants of “euromaidan” who opened fire.

The people's beginning to the republican processes in Ukraine was laid by the inhabitants of the glorious Donetsk. On April 6, demonstrators occupied the regional administration building in the city. The activists created the Donetsk Republican People’s Council, which immediately adopted the Act of State Independence of the Donetsk People’s Republic, which stated: “The Donetsk People’s Republic is being created within the administrative boundaries of the Donetsk region. The decision on this comes into force immediately after the referendum. ”

The Council decided that a referendum on the status of a People’s Republic would be held no later than 11 in May. Thus, in a month or even earlier, the citizens of the republic will express their will. And do not go to the grandmother to guess how they vote.

Volodymyr Skachko on the Ukrainian resource "Versions.com" Commented on Donetsk events as a well-thought strategic move:

“All this is a reaction to the fact that Donetsk region proclaimed itself the Donetsk People’s Republic (DPR) and completely confused all the cards to the“ fighters with separatists ”both in Kiev and in Brussels, Berlin and Washington, because Russia had withdrawn from the attack and accusations . The DPR proclaimed sovereignty, but did not ask for membership in Russia. From the neighboring state she needs only help. Moral, political, diplomatic and military. What the Pitmen have asked about and wrote in a special letter to Russian President Vladimir Putin in writing and orally.

And this is the main difference from what happened in the Crimea. And only because of this, “the departure of Donetsk” and the formation of an independent DPR can become what is called a model project for the entire southeast of Ukraine ... ”

How is the channel NTV With reference to ITAR-TASS, the Council of the Donetsk People's Republic appealed to Vladimir Putin with a request to introduce a temporary peacekeeping contingent in the region.

In another report NTV quotes the words of one activist who came to the square to people and announced that “Donetsk Republic will build relations in accordance with international law and on the basis of equality and mutual benefit, the territory within the recognized borders is indivisible and inviolable.” Protesters began to chant in response: "Russia!"

The channel quotes from the statement of the deputies: “The people of the Donetsk People’s Republic have the exclusive right to own land, its subsoil, airspace, water and other natural resources located within the territory of the republic. The Republic independently determines its economic status, conducts financial, credit and investment policies, forms its state budget, establishes the procedure for the formation of monetary and other funds. The Republic has the right to prohibit the construction and cease operation of any enterprises and institutions, as well as other objects that pose a threat to environmental safety. The declaration is valid from the moment of adoption and is the main one for the adoption of the Constitution of the Donetsk People's Republic.

In Donetsk, they confirmed that in the case of a forceful resolution of the conflict by Kiev, the republic would ask for help from Russia. Donetsk politicians said: “All these months, residents of Donbass have tried to protest. We appeal to Putin, only in Russia we see protection. ”

For Donetsk, his word and freedom-loving Kharkov. The activists who gathered last night in the lobby of the regional administration building (the police did not let them in), held a “meeting of the regional community”, where they expressed no confidence in the deputies of the Kharkiv Regional Council and appointed persons acting as deputies. The sovereign Kharkiv People's Republic was proclaimed, which intends to build relations with other states in accordance with international law. As in Donetsk, a regional referendum is scheduled here. The date he will be appointed today.

Following the example of Donetsk, Kharkiv activists decided to appeal to the Russian government with a request to ensure the peaceful holding of a referendum and generally act as mediators. At the same time, the appeal will be sent to the name of Yanukovych: as a legitimate president, he will have to give legitimacy to the people's will and approve the resolutions adopted.

Kiev "and. O. "responded to the will of the south-eastern regions of the creation of the anti-crisis headquarters.

Completely this new structure is magnificently referred to as the “Anti-crisis headquarters for counteracting the escalation of separatism in the three eastern regions of the republic: Donetsk, Lugansk and Kharkov”. At least, so long called her press service of the Verkhovna Rada, quoting Oleksandr Turchynov. The latter, in an address to the nation of April 7, said: “The enemies of Ukraine are trying to play the“ Crimean scenario ”, but we will not allow this.”

According to Turchinov, who leads Taras Burnos ("Voice of America"), against those "who took in hand weapon", Will be held" anti-terrorism measures. " Turchinov also noted "the passive behavior of some structures of local law enforcement agencies," which he promised to equip "at the expense of units from other regions."

In parallel and. about. promised to tighten legislation. According to him, one of the first issues put on the agenda of the Verkhovna Rada 8 of April will be “a law to strengthen criminal responsibility for separatism and other crimes against the state.”

“Donetsk separatists act exactly according to the plan sent from Moscow,” Dmitry Tymchuk, head of the Center for Military-Political Studies, wrote on Facebook. “Only a couple of hours ago we reported on the opening of the Kremlin to create a“ Donetsk Republic ”, as in Donetsk from the stage set on the steps of the Donetsk Regional State Administration, the creation of an“ independent Donetsk Republic ”was announced.

On the Ukrainian satellite television channel Espresso.TV, it was reported that "organizing the riots, in particular, for the attacks on the Security Service in Lugansk, the separatists were paid five hundred dollars, and the Yanukovich family finances these riots from Moscow."

In short, "old songs about the main thing."

The conversation of the foreign ministers from the Russian side also "stressed the need for respectful attitude to the aspirations of the residents of southeast Ukraine, to prevent attempts to respond forcefully to the legal requirements in terms of ensuring their linguistic, cultural and socio-economic rights."

As for the so-called “reaction of the world community,” it was quite predictable. The West is in complete confusion. One ridiculous statement follows another. Neither Western Europe nor the United States has a clue what to do. And therefore, apparently, nothing will be done. Not "for" Ukraine, or "against" Russia. The West can only contemplate ...

European Commission President Jose Manuel Barroso, whose opinion приводит Dmitry Gordon, said in an interview with the German newspaper Kölner Stadt-Anzeiger, that the European Union is not ready now to accept Ukraine into its community:

“Ukraine is not ready for this either today or in the near future. Just as the EU is not ready to accept a country like Ukraine. ”

At the same time, Barroso confirmed the EU’s desire to support Ukraine on the road to democracy.

As the NTV With reference to Interfax, negotiations between Russia, the USA, the EU and the current authorities in Kiev can take place in the next 10 days. This was stated by the head of the State Department press service Jen Psaki. According to her, such an opportunity was discussed by 7 in April by telephone by US Secretary of State John Kerry and Russian Foreign Minister Sergey Lavrov.

As noted by the TV channel "RT" with reference to Interfax, in its assessments of the situation in Ukraine, the United States uses reports from the Ukrainian authorities, rather than independent sources. D. Psaki also stated this, giving this a proper explanation: “Of course, we maintain close contacts with the Ukrainian government, and, of course, we work closely with him. They are on the scene, so it is their information that is often reliable and timely. ”

Psaki further stated that the events in the east of Ukraine were initiated by Russia: “It is well known that those who speak in these different regions of eastern Ukraine are pro-Russian separatists. There are fairly well-established assumptions that some of these speakers are paid and they are not locals. All this causes us serious concern. ”

However, psaki stressed that the United States does not provide for military measures in connection with the situation in Ukraine.

Earlier, on the situation in Ukraine, the famous White House mouthpiece Jay Carney spoke. “We saw groups of pro-Russian protesters seizing government buildings in Kharkov, Donetsk and Lugansk. We have good reason to believe that some demonstrators were paid, and they are not local residents, ”he said.

“If Russia moves to the eastern part of Ukraine, openly or secretly, it will be a very serious escalation,” said Carney.

The Ministry of Foreign Affairs of the Russian Federation issued a statement in which he demanded to stop unfounded accusations against Russia: “Enough to nod to Russia, accusing it of all the troubles of today's Ukraine. The Ukrainian people want to hear from Kiev a clear answer to all questions. It's time to listen to these legal requirements. ”

Thus, the reaction of Kiev and the West to recent events is in many ways similar. The freedom-loving citizens of the south-east of Ukraine are referred to in Kiev indirectly or directly as terrorists and separatists, whether paid by Yanukovych from his savings, or by Putin himself from his bottomless pocket. The will of citizens is recognized illegal, and different “and. Fr. ”are preparing to bring the rebels to the harsh responsibility, for which they intend to tighten the Ukrainian criminal legislation. The US Department of State, in turn, believes that "some of these speakers are paid, and they are not local residents." America nevertheless refused to fight with the Russian destabilizers, while European Commissioner J. Barroso said that Ukraine was not ready to join the EU, the EU was not ready to accept it, but Brussels wanted to support Ukraine on the road to democracy. Summary: The West does not know what to do. The West has no plan. Therefore, negotiations with Moscow will take place not immediately, but in ten days. The white house needs to think ...