April 8 2014
32
The other day, bmpd's top source aviation industry told some, perhaps not very sensational, but not uninteresting details of the current situation. We hasten to share them with our readers.

Factory tests were completed in the 2013 year, State Joint Testing tests started this year, which are scheduled to be completed in the 2015 year. With 2016, small-scale production will begin. This year, the main efforts on testing will be aimed at testing the avionics, especially those of its modes, which provide stealth. In the near future, the development of the application of TSA will also begin. In 2014, another sixth machine will join the trials, next two more, then a series. To prepare for production in Komsomolsk, mechanical and heat treatment was expanded, a new electroplating industry was created. The test and testing ground base is being expanded and modernized, since the old one cannot provide tests of the fifth generation complex. When creating the PAK FA, as well as the Su-35С, they abandoned the use of pilot production, the testing machines are manufactured at the serial plant, which facilitates preparation for the series. 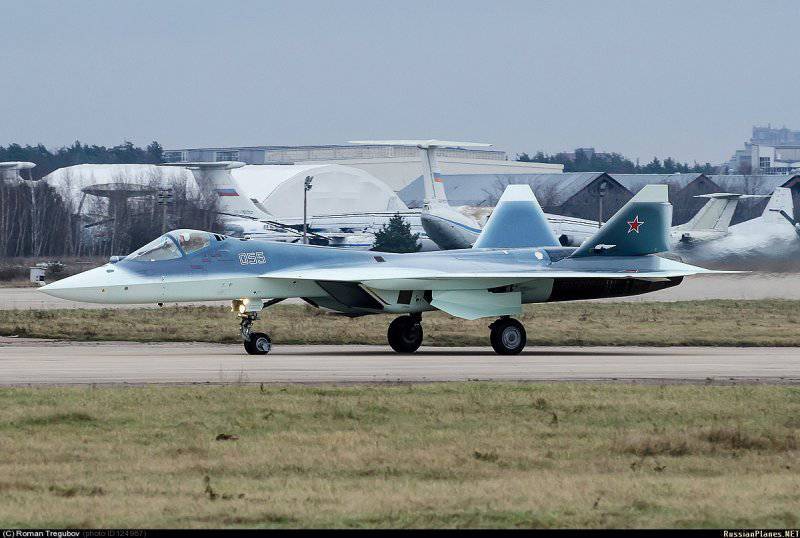 The fifth prototype of the PAK FA fighter is the T-50-5. Zhukovsky, November 2013 of the year (c) Roman Tregubov / russianplanes.net

The question of creating a lightweight fighter of the fifth generation.

Our combat aviation complexes have always been and will be heavier than the western ones, not only because of a different technological environment, but also in terms of operating conditions, so the inclination of the military to heavier vehicles is understandable. Now the main thing is to develop the technological environment so that when such a task arises, to be able to create adequate technical solutions. Maybe it will not be a fifth-generation lightweight fighter, but drones and advanced fourth-generation vehicles. To accomplish the task of creating a light fighter, it is necessary to achieve significant progress in Migov cooperation, both on engines, on avionics, and on radar. That is, first - the technology, and then later technical solutions. Today, the main task is the development of the MiG-29 in the direction of the MiG-35. In general, the future grouping of the Air Force is likely to be a mixture of PAK FA, Su-35 and drones.

The Ministry of Defense of the Russian Federation has not yet decided definitively with this topic; various projects are being considered. The main challenge for the favorite - IL-112В - is cost control. At the same time, UAC is already thinking about creating a family of super-heavy MTC, but it is clear that everything should be done not at the same time, but consistently - first LVTC and MTA, then heavy machines. Equally, the military has not yet decided on a promising attack aircraft. The options for deep modernization of the Su-25, creating a light attack aircraft based on the Yak-130 and the development of a fundamentally new machine are being considered.

The issue of restoring production of the MiG-31

If we resume the production of the MiG-31, then only the deepest modernized. But in principle now, with increasing missile launch range, we need not high-speed vehicles, but machines capable of long-term locking.

There is a contract for the development of preliminary design. According to the results of the draft design, the military will issue a TK. In the work on the PAK DA, the potential will be used not only of Tupolev, but also of the entire UAC, in particular, the technical and ORGANIZATIONAL potential of Sukhoi, created during the implementation of the PAK FA project. Apparently, it is precisely in the PAK DA project, and not on the light fighter that engineering and design resources will be used, which will be released after the end of the main scope of work on the PAK FA.

The problem of the diversity of the park

In general, this is a question for the military. In principle, the task of reducing the type is, and at some stage the number of types will be reduced. But now Su-30М2 performs the function of a combat training aircraft for the Su-27CM, with which it has a unified information and control field. Su-30CM complements the Su-35С, which will become the fourth-generation base aircraft for the Russian Air Force. Purchases Su-30М2 - this is a consequence of the acute shortage of UBS in the Air Force of the Russian Federation. In part, excessive heterogeneity is a consequence of the lack of procurement in the 90 and early zero years. When money came from the military, they began to buy everything that the industry has to offer, including from the reserves.

The main task of the state defense order

The priority for today is to ensure the health of the park. Before the transfer of the repair factories to the UAC, the health indicators were at the level of 40%, now they have reached 50%, the task for this year is to reach the 60% of health. Repair contracts have just begun to be signed in large quantities, the repair cycle is 5-6 months, so the situation will drastically improve only next year. The share of new aircraft in the RF Air Force is just 10%, so repairs are necessary (for comparison, the share of new helicopters is 40%). Only on engines for this year repair of 600 engines has been contracted, contracts are signed for 95%. A total of 200 aircraft will be repaired. The absolute priority is the repair (with simultaneous updating of avionics) of the Long-Range Aviation machines.

Development of the program Su-35С

The main thing last year was the integration of TSA, the entire 14 of TSA types was integrated. Now the task is to expand the scope of the TSA. But the integration of new types of TSA continues. This year 12 Su-35С (not counting officially transferred in February) will be delivered, and most importantly - the conclusion of a new contract for 48 units is expected. The warranty period for cars in Dzemgas is three years, this is unprecedented. Now the R & D continues in parallel, mass production is underway and measures are being developed to maintain the park. Recovery after fault detection - no more than 5 hours. Partly due to the proximity of the plant, but there also sits a warranty team, technical support team and technical kit is deployed. According to the organization, the program is distinguished by a high level of integration - the chief designer Igor Demin became the head of the entire Su-35С program, and is now responsible not only for OCD, but also mass production and operation support.

The source categorically denied rumors about the relocation of OAO Tupolev to Kazan. On the Moscow site, 1,5 is currently operating in a thousand people, and no one is going to send them anywhere. Another thousand people are employed at the Tupolev branch at KAPO, and 500 in Ulyanovsk, these two units will grow, but not at the expense of transferring people from Moscow. The merger of JSC Tupolev and KAPO into one economic entity is necessary for a more expeditious resolution of issues of the implementation of the state defense order, primarily in the area of ​​long-range aviation. This is an objectively mature restructuring, similar to the creation of a vertically integrated company Sukhoi or RAC MiG. Unification will make life easier for the military. Now the Ministry of Defense of the Russian Federation concludes contracts with two economic entities, which, when problems arise, nod at each other. After the merger will be the sole responsible for the performance of the state defense order

According to the KLA in general. Every year 1,5 thousand people are hired. Over the seven years of the KLA, investments in rearmament have grown from 1 to 10 billion rubles, in just seven years 45 billion rubles have been invested, that is roughly about 1,5 billion dollars. The strategic goal is to increase the production volume of UAC to 350 billion rubles, only then the company will become effective. When creating the KLA, two plants - Komsomolsk and Irkutsk, having 40% of the KLA staff, gave 85% of products, the remaining 60% of employees - all 10% of products. Now the situation is leveling off, Voronezh (10 billion rubles in sales this year) and Ulyanovsk began to breathe, production in Novosibirsk is growing.