"The United States violated the fundamental principles of world order" 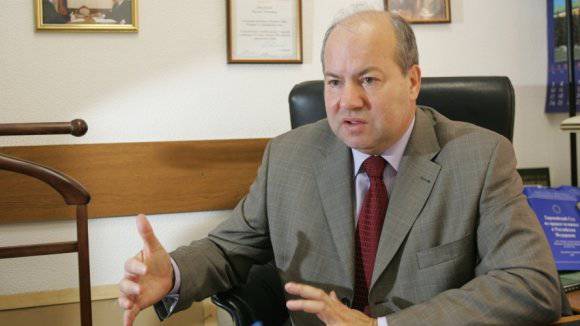 On the eve of the PACE session, which will begin its work on Monday, Ambassador Extraordinary and Plenipotentiary, member of the Russian delegation, and in the past Russia's Permanent Representative to the European Community (from 1998 to 2003) Vasily Likhachev told Izvestia correspondent about why the USA and Europe impose sanctions on Russia and do not want to recognize the referendum in the Crimea.

- The situation that is taking shape in the world more and more resembles the approach of the Cold War. How prepared are we for this scenario?

- We are ready as a country, as a sovereign state, which has the full range of foreign policy, foreign economic, diplomatic means for any scenario. This is not bravado, which, perhaps, someone will hear in my words, but such an objective analysis of what Russia is today. Now - under the influence of especially the Ukrainian events, the situation around Syria, Iran - a new system is being created to stimulate the development of our country as one of the poles of the world. This is evident not only for us, although the Western world powers, even at the level of strategic partners, are not ready to accept this trend. For them, this is akin to a situation where an infant lay and lay, and suddenly began to talk briskly, walk, make claims, declare its interests. Russia, of course, cannot be called a child either in the geopolitical or geo-economic sense, but it’s like a new reading, our new self-identification, it’s an objective, real fact.

If you look at the fate of Russia, the fate of the USSR, it may turn out that we constantly lived surrounded by all kinds of negative energy circles and factors. The same Americans did not recognize Soviet Russia, there was aggression by fascist Germany, then the beginning, I think, due to the fault of the Western powers, the Cold War, the arms race ... But Russia always overcame everything and not only survived, but won in these difficult conditions. Now, as it seems to me, we are again passing this kind of trend.

“So you are allowing a new cold war?”

- It seems to me that its elements have long been present in international relations. The actions of our partners, including NATO, Washington, Brussels and others, are difficult to call a rhetoric of the Cold War.

- In your opinion, what happened in Ukraine after all - the “orange revolution” or the democratic change of power, which is insisted on in Europe?

- Euromaidan, of course, is a US project, well thought out and organized with the involvement of US intelligence agencies - the CIA, FBI, military intelligence and the State Department. According to my information, all these structures tried to bake some products based on the obvious problematic phenomena of the Ukrainian state. They were very well calculated the contradictions of the west and east of the country, the contradictions are interlingual, inter-ethnic, even, I admit, gender contradictions. It is these technologies that Americans have recently applied in the Orange Revolution series, especially in the Middle East. They did everything to loosen the power and reduce it to a degree of amorphous education, to do anything with it, like with a jellyfish. Within the framework of this project, groups of problems connected with the contradictions between the authorities and the Ukrainian society, as well as differences within the authorities - the Rada, the government, the president ...

- Is this a good project?

- No, this project is completely unsuccessful, because it violated the fundamental values ​​or, let's say, the triad of inviolable rights: the rights of peoples officially enshrined in the UN Charter, the rights of national ethnic groups and, finally, human rights. That is, one can say the values ​​that are fundamental to the whole world.

As a result, what we see today in Ukraine turned out to be devastation, an economic crisis, confusion in the heads of politicians and the population, a perverted perception of the situation by the European community, which is gradually becoming aware of what is happening.

It is no coincidence that today in Brussels, they began to look at the situation differently: first, the question of why the European Union should support Ukraine was already raised out loud, and secondly, the Kiev authorities had already made it clear that it distanced itself from extremists.

- Will the presidential elections in Ukraine lead to stabilization? Does Russia recognize them and what is the legal status of Yanukovych today?

- Yanukovych unequivocally remains de jure president. This is recognized not only by Russia, but also by countries that are guided by the principles of the rule of law. If we talk about the elections, then everything is more complicated. Objectively, the new government of Ukraine does not have many legal tools to become legal and recognized by the international community and Russia. I think that the proposals that were formulated by Russian Foreign Minister Sergei Lavrov in a dialogue with US Secretary of State John Kerry are close to this scheme: constitutional reform, amendments or adoption of a new text of the constitution, elections. But today no one will tell you that this or that scheme will be implemented.

- Do the agreements between Lavrov and Kerry talk about recognizing the US referendum in Crimea?

- Now there is a political game on recognition – non-recognition.

- Why in the US and the EU pretend that the referendum is illegal? After all, he was invited to international observers, including the OSCE?

- This is a technique, a set of techniques, which is designed to show that the position of Europe and the United States is correct three times, and Russia operates outside the legal field ... I believe that there is a crisis in the model that the European Union is preaching. They may be offended at me, but from the model of democracy they left for democracy “a la Brussels”, “a la Washington”, “a la London”, “a la Berlin”. All that does not fit into it, they deny, because, from their point of view, it is the threat of the existence of this model.

- But then why the United States can interfere in the internal politics of Syria, Iran, and this is normal, and Russia, even without interfering, turns out to be guilty?

- It's not even double, but triple standards. We know how much Lavrov and his team took to convince Americans that there are other approaches in the Syrian situation. I sometimes get the impression that they are so close ...

- Hysteria arises when they fail, when they see a successful move from the Russian side and the world applauds Moscow when they say: “Vladimir Putin again outplayed Obama.” And what then is Obama, to whom even his inner circle says that Putin voices sensible things, you should listen to him ... That is, their line of conduct contradicts the global world order, global psychology, philosophy and even the global economy.

- How, from your point of view, as an international lawyer, are sanctions imposed on Russian officials, and especially on parliamentarians?

- These countermeasures are certainly subjective. We tried to punish those of my colleagues who took an active part in the preparation of draft laws on the annexation of the Crimea, which no one had denied - a legitimate referendum was held there. All my fellow parliamentarians acted within their constitutional powers. The unlawfulness of these sanctions gives grounds to those who entered these lists the right to satisfaction. They have the right to recover both moral and image losses.

- Which court should do this?

- It will be a terrible question not for us, but for them. Because today they will have to say that everything is black, and tomorrow we will have to say that everything is white. And one more thing: those who imposed sanctions did not mark the time of their actions. This is especially true of the economic and banking spheres, which incur real millions and billions in losses. Who will compensate for this? I think that all subjects of the market - banks, legal entities, industrial structures - have the full right to file claims for compensation. There are Stockholm arbitration, Paris arbitration, structures of arbitration. I would have spun one such process for the sake of interest in order to see what arguments our counterparts would bring.

- How much does Russia still need the PACE platform? Some Russian politicians say they don’t need ...

- What is happening with the PACE, has for me some kind of personal coloring. In the 1996 year, when I was deputy chairman of the Federation Council and oversaw international activities, we did a lot with the Russian Foreign Ministry, the State Duma, and the regions to get us accepted. Yes, it was very important for Boris Yeltsin, at that time the president. It was necessary to show that this is a president who adopts democratic values, it was very important against the background of the Chechen campaign. We then proceeded from the fact that Russia should integrate into the European legal space. Now this task is performed by the Council of Europe.

Today, on the one hand, it’s a pity for the money Russia spends on this organization - € 22 million, but on the other - if we leave this site now, it will look like a political flight. This childish status of the offended: you do not hear us, well, we went ...

Today we must send a very serious signal to our surroundings in PACE. He is civilized, and will be expressed by our delegation, so that they know: Russia is Europe, and not only geographically, but also politically. Our values, which we profess, are no different from universal, the most important thing is that this political exaltation should not close us from each other. It’s not we who are moving away from Europe, it’s Europe that decided by all sorts of forces to suddenly stand at a distance with Russia.

One very interesting question arises: the trade turnover between Russia and 28 countries of the European Union exceeded € 500 billion. Every day over a billion! We provide Europe with 25% oil demand, more than 35% gas demand. Even if they want to refuse it, they will not find these volumes anywhere. This is objective.

Russia must be respected at least for the fact that we are not a political kid. We could start our C-300, C-400 military complexes, then, for example, the regime in Syria would receive such weaponthat all NATO drones would have been shot.

Russia has something to oppose and to which the West has no answer. Russia will remain a player, especially now, when both the president and the government have received the strongest support of the population.

Ctrl Enter
Noticed oshЫbku Highlight text and press. Ctrl + Enter
We are
Who owns the energy - he owns the worldHow can Russia survive and win in the 21st century?
Military Reviewin Yandex News
Military Reviewin Google News
40 comments
Information
Dear reader, to leave comments on the publication, you must sign in.