April 10 2014
2
The Ushakov Medal is one of the few awards that have been transferred to the Russian award system from the USSR premium system without changes in appearance. 2 March 1992, the relevant Decree of the Presidium of the RF Armed Forces was allowed to apply for awarding Russian citizens Ushakov’s Medal, which was approved in the USSR in 1944 year. This medal was designed by the famous Soviet architect M. A. Shepilevsky. March 2 On the basis of a presidential decree, the 1994 medal was re-established in the Russian award system with some changes in its statute.


According to the statute of the award, the Ushakov Medal can be awarded to the military personnel of the Russian Navy, as well as the maritime security bodies of the border service of the Federal Security Service of Russia for bravery and personal courage, which were manifested in defending the country and state interests of the Russian Federation the performance of combat missions by units and ships of the Navy and the maritime security agencies of the Federal Border Service of the Russian Federation, while on combat duty and combat service, at maneuvers and exercises, while performing military duty in conditions which are associated with a risk to life, as well as for excellent performance in maritime training and combat training.

The posthumous awarding of the Ushakov Medal is not provided, as is the repeated awarding of this medal. The medal is worn on the left side of the chest and, in the presence of other RF medals, is located immediately behind the Suvorov medal. The Ushakov Medal is the only Soviet award that in the award system of the Russian Federation is left without any changes in its appearance. At the same time there is a funny paradox. On the obverse of the Soviet award in the upper part above the portrait of Ushakov there was a small five-pointed star. In the new, approved in Russia description of the medal, this asterisk is absent, but it is present on all awarded medals. 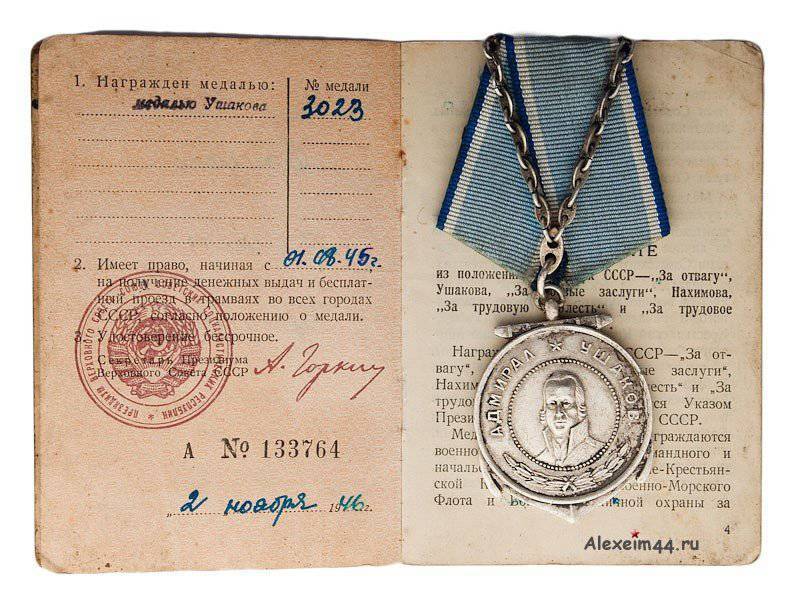 The Ushakov Medal is an all-stamped one, it is completely made from silver. The medal is made in the form of a circle with a diameter of 36 mm, the thickness of the medal is 2,7 mm. On the front side of the award in the very center there is a bosom image of the famous Russian admiral F. F. Ushakov. On the circumference, the image of Ushakov is framed by convex dots. Above the image is the inscription "ADMIRAL USHAKOV" (all capital letters), under the image of the admiral there are laurel branches, which are fastened with a crossing ribbon. On the back side there is an anchor, the height of which is 49 mm, also here is the serial number of the medal, which is placed to the right of the anchor.

Through the ring, which is located in the anchor bracket, the reward is connected to the standard pentagonal shoe. This block is covered with a blue silk moire ribbon 24 mm wide. Along the edges of the tape are two strips - white and blue. White stripe width - 2 mm, blue - 1,5 mm. At the same time the medal has a unique decorative element. A silver V-shaped miniature anchor chain is placed on top of the ribbon on the block. The two ends of this silver chain are attached to the rings in the upper corners of the pad, and one to the eye of the bottom of the pad. In special cases and for everyday wear, you can use its miniature copy, the diameter of which is 16 mm.

Although this medal should be awarded to military personnel of the Navy and the Border Guard Service of Russia, there are foreign nationals among those awarded with this medal. At the same time, the possibility of awarding foreigners in the statute is not spelled out. In total, about 100 foreign citizens, including those filed with the UK, received the Ushakov Medal. All of them were awarded for the events of the Second World War, as participants of the famous polar convoys. At the same time, awarding the Ushakov Medal to British citizens required special permission from the government of this country, since British laws prohibit the receipt of foreign awards for acts that were already marked by the awards of the United Kingdom. 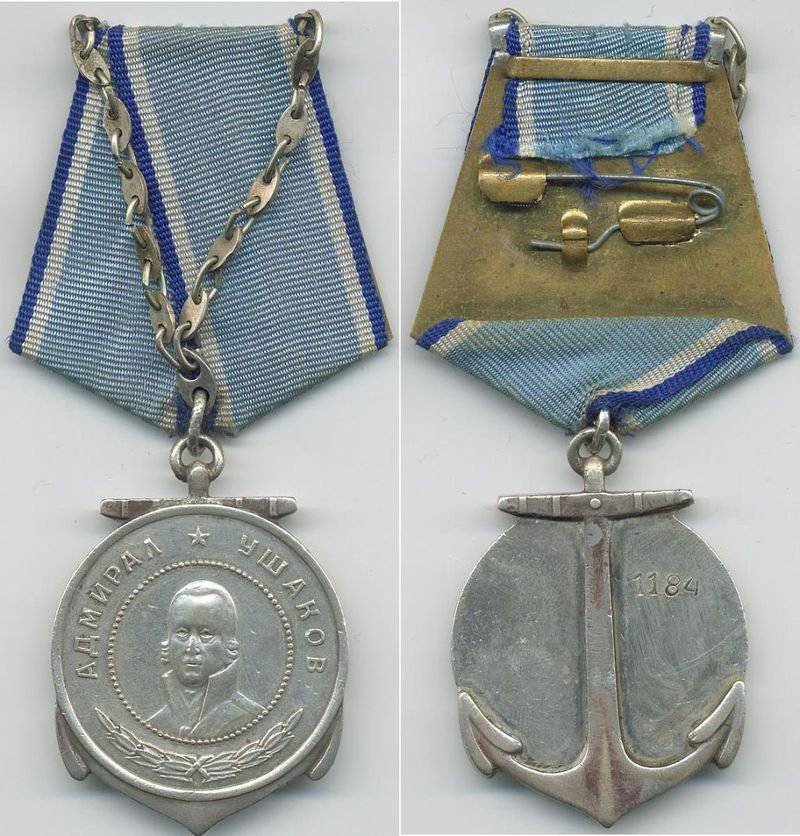 The first award of the Ushakov Medal in the Russian Federation took place on July 7, 1992. On this day, this award was immediately awarded to 996 veterans - graduates of the Solovetsky Jung School of the Navy of the Soviet Union. The first award was re-established in 1994, the award took place on April 11, 1994, then the medal also received 23 veterans of the Great Patriotic War. The last currently known Ushakov medal was awarded on January 14, 2014. The medal was awarded to Maxim Zherbinko, captain of the 2nd rank, commander of the BDK "Alexander Shabalin", which is part of the Baltic fleet Of Russia. Maxim Zherbinko was awarded this state award for a successful military campaign lasting more than a year - 392 days.

In total, more than 3,5 thousand medals were awarded in Russia. Mostly the medal was awarded to veterans of the Great Patriotic War, participants of special operations or military campaigns. The relatively small number of awards is due to the fact that the Russian fleet has not conducted any active hostilities in the maritime theater of military operations since the Great Patriotic War. And this is the case when it is for the best. Unfortunately, for the medal of the same series, which is intended for awarding soldiers and officers of ground forces - the Suvorov medal, in the modern Russian stories There were much more reasons for delivery.

Ctrl Enter
Noticed oshЫbku Highlight text and press. Ctrl + Enter
We are
"For service and courage" "He was given for courage and loyalty to his native land."Defenders of the frontiers of the empire. From the history of the Separate Border Guard Corps
Military Reviewin Yandex News
Military Reviewin Google News
2 comments
Information
Dear reader, to leave comments on the publication, you must sign in.