April 8 2014
18
Recently, I too often have to report mortar attacks on residential areas of Damascus and other cities in Syria. I would like to visually show the consequences of exploding mortar shells produced by gangsters.


On April 4, four rounds were fired by “oppositionists” in the Bab Tum metropolitan area. As a result, only by a miracle no one died, but 25 people were injured. Some of them are in intensive care. Among the victims are children. Great material damage.

This is how dry messages usually look, but the explosion of each shell is an act of terrorism. If he does not kill people, it can be considered a great happiness. But often only the wounded and material damage is not enough.

“Bab Touma” means “Gate of Thomas”, it is the most famous of the 9 ancient gates of Damascus. In the old days, the square on which the gates are located, as well as the nearby neighborhoods with benches and cafes located in them, gathered numerous foreign tourists. Now this area is one of the most shelled in the Syrian capital. 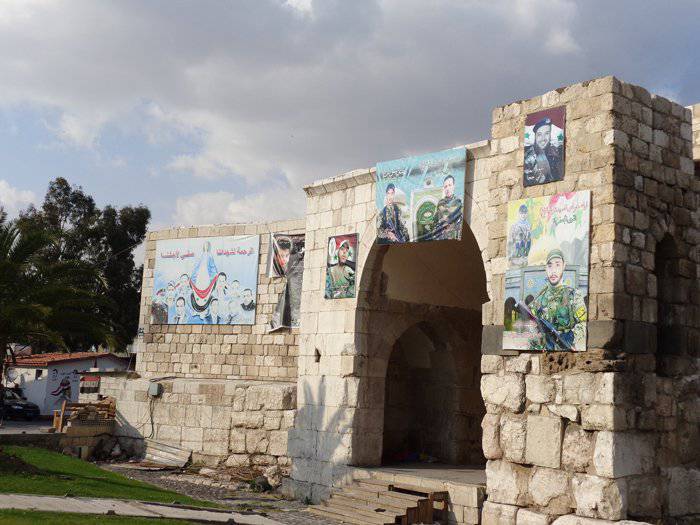 At present, this ancient landmark is hung with portraits of fallen heroes - soldiers, warriors, police ... And in the neighboring quarters there are leaflets with portraits of civilians killed during terrorist mortar attacks. Among the residents of the shelled area, we met a man who had lost two sons in this war - their portraits now also mournfully hang on a poster. 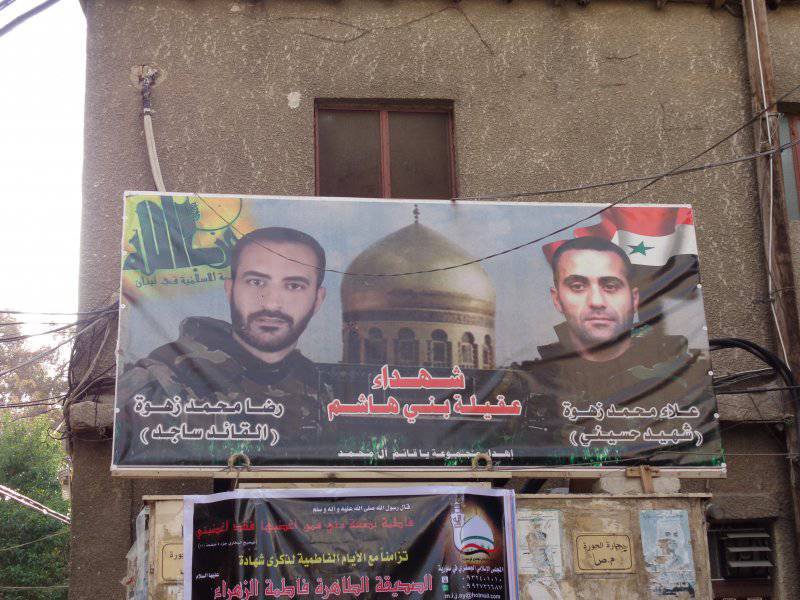 Near the bus stop - broken glass. There was a poster with a portrait of Muhammad Saeed Ramadan Al-Buti, a highly respected theologian and scholar in Syria, who was killed by thugs in March 2013. 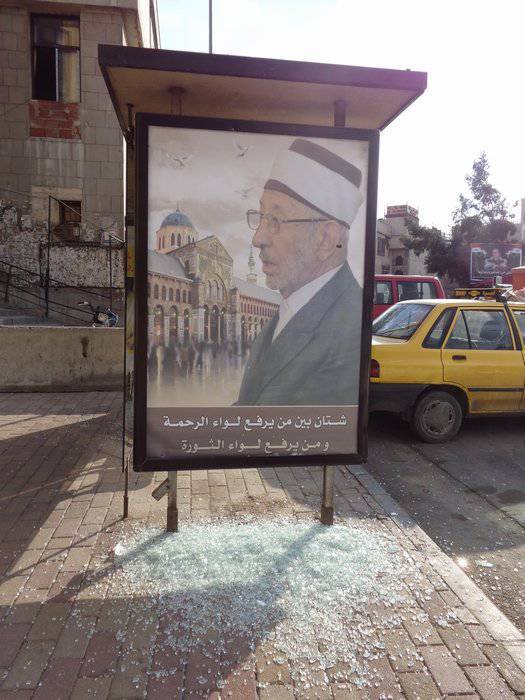 During shelling, car owners almost always suffer damage. One car, one might say, was lucky - they got off with broken windows and damaged tires. 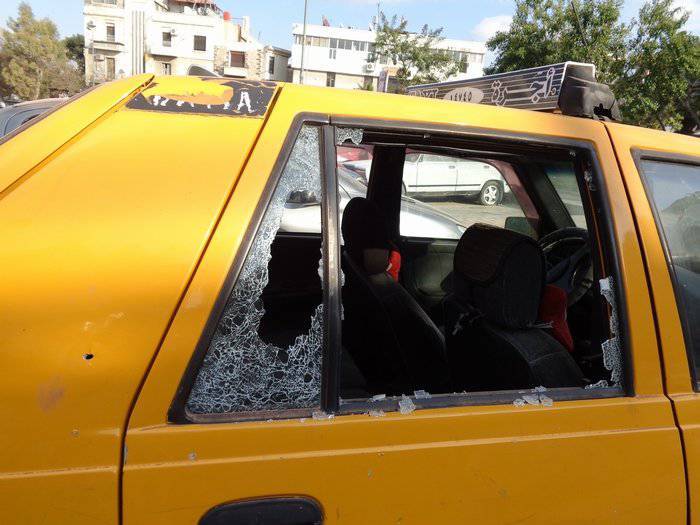 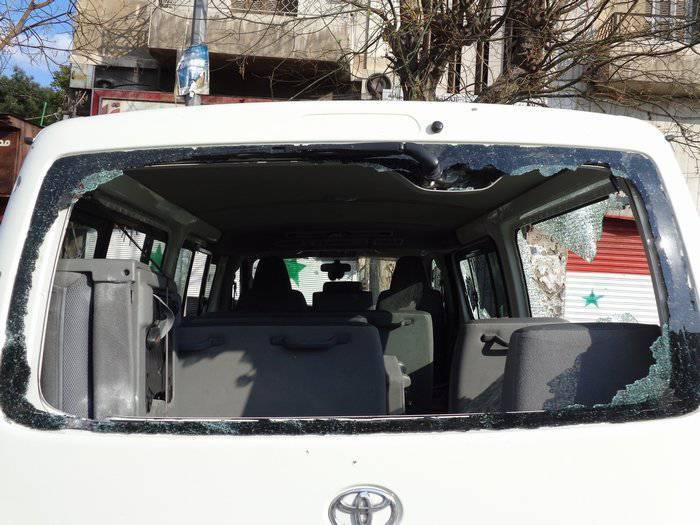 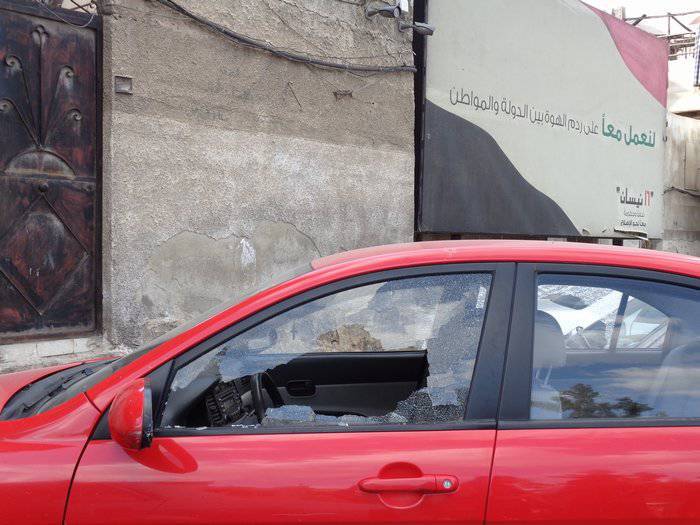 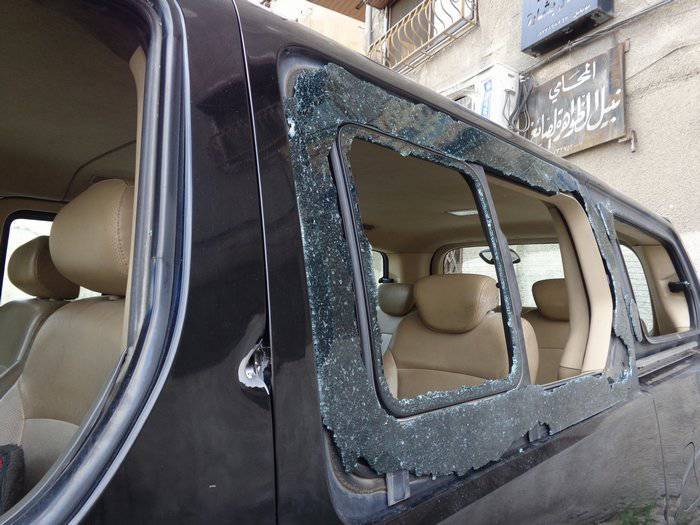 But many of the cars after such a bombing are no longer subject to recovery. 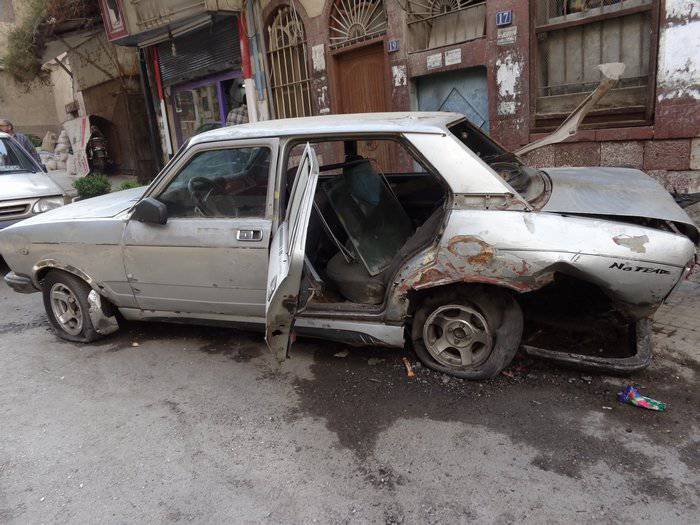 According to eyewitnesses, with the explosion of the projectile, this machine already jumped into the air. One of the parked cars got into similar scrape already three times.
On average, when a mortar shell is broken, about 10 machines are suffering - and in fact for many of them the owners still continue to pay loans.
One of the shells landed in the apartment, pierced the roof, caused damage to the room, but did not explode, but was stuck in the wall. 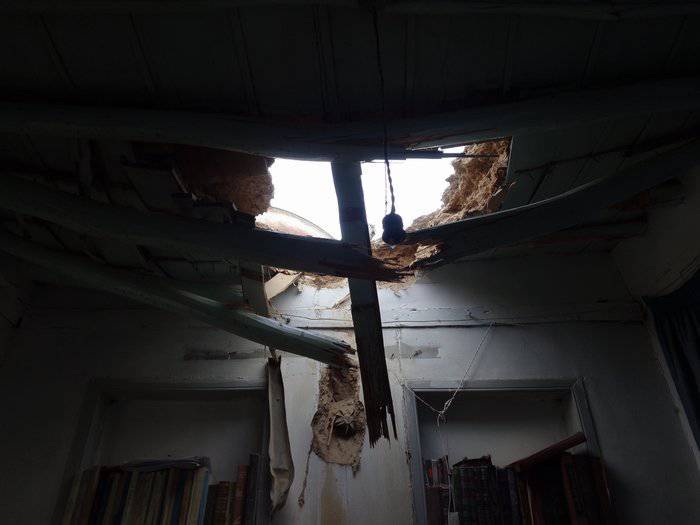 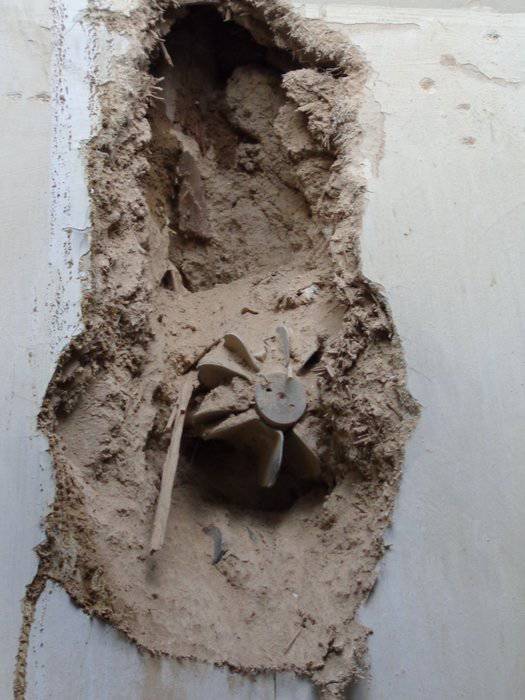 We can say that the family living in this apartment, incredibly lucky. Break such a thing - would not have been without casualties.
The shell hit the room where the high school student lives. Fortunately, at that time he was sleeping in another room (an afternoon nap in the country is considered an everyday affair). And if he taught lessons at the desk or lay on the bed in his room? 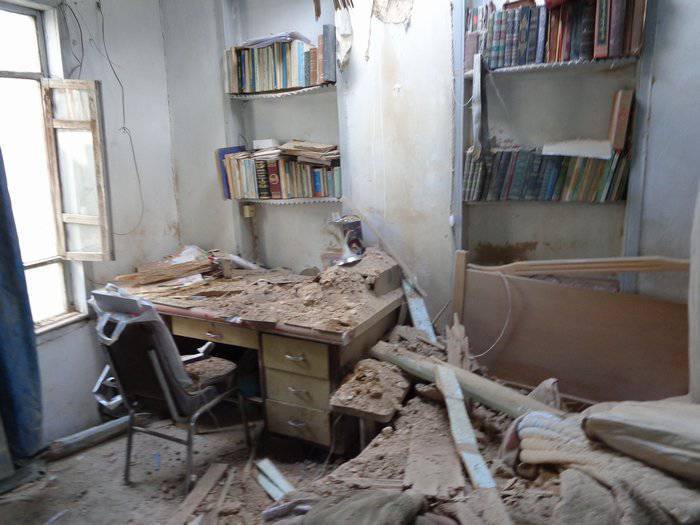 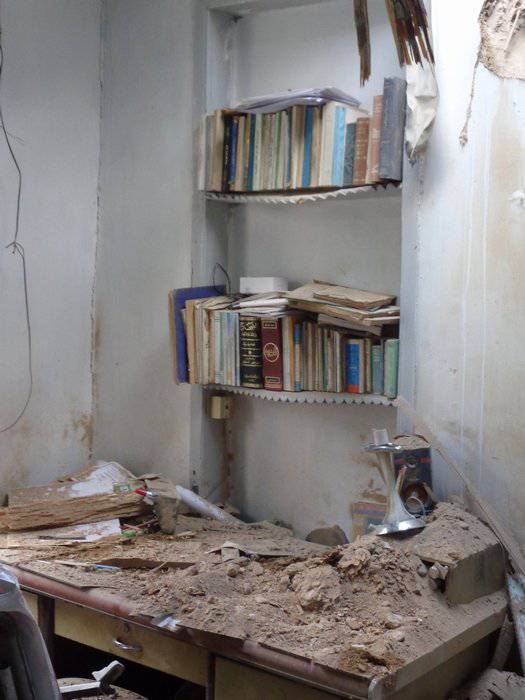 Among the objects that most often suffer from attacks are small shops. And God forbid, if at the moment of hitting the projectile they will be people. In this case, too, we can say lucky - the shelling occurred on Friday, which is a weekend in Syria. Most of the shops were closed and there were few people on the streets. 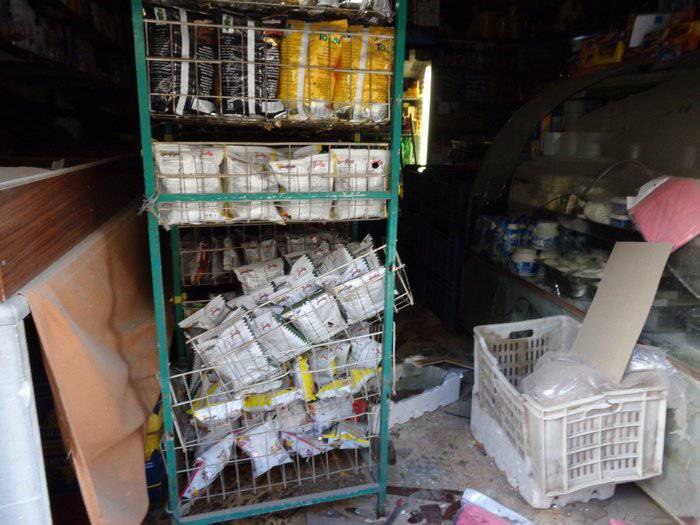 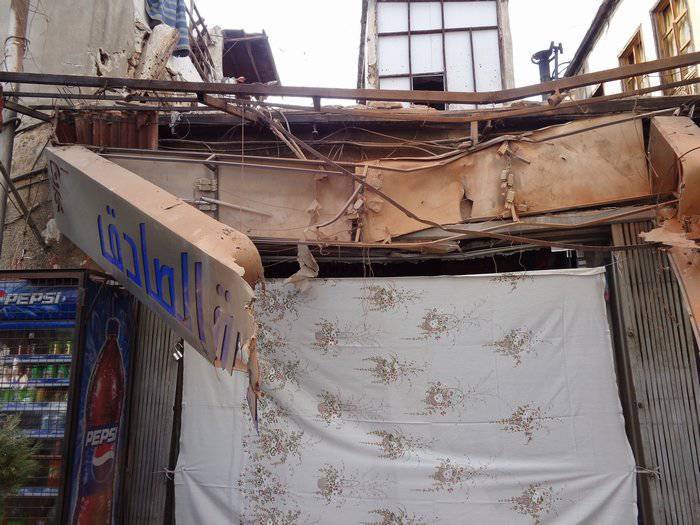 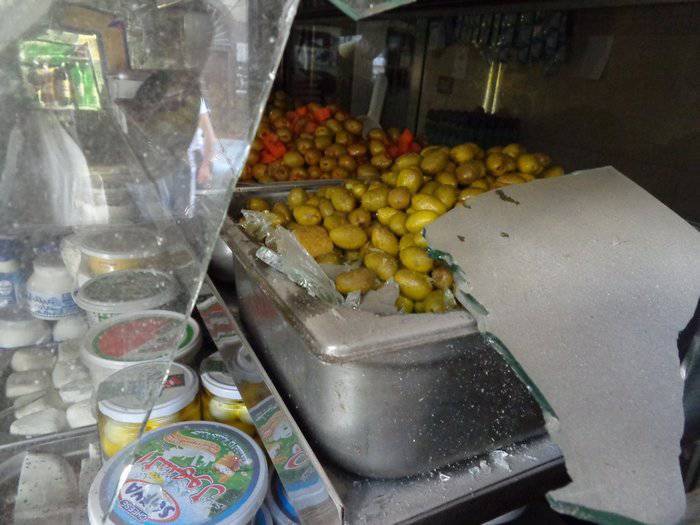 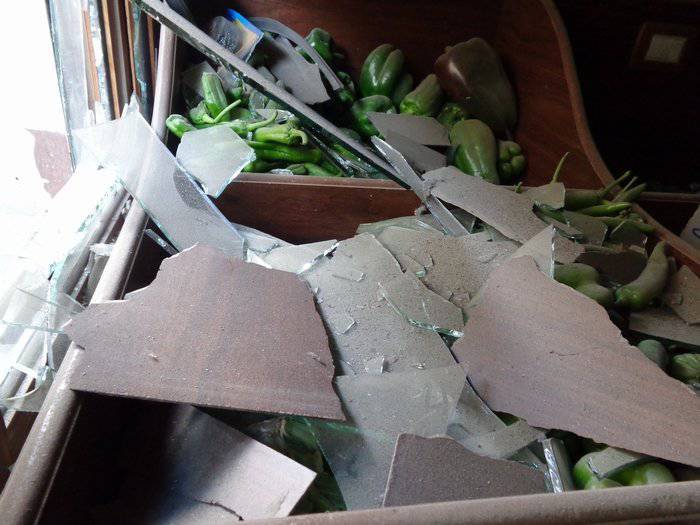 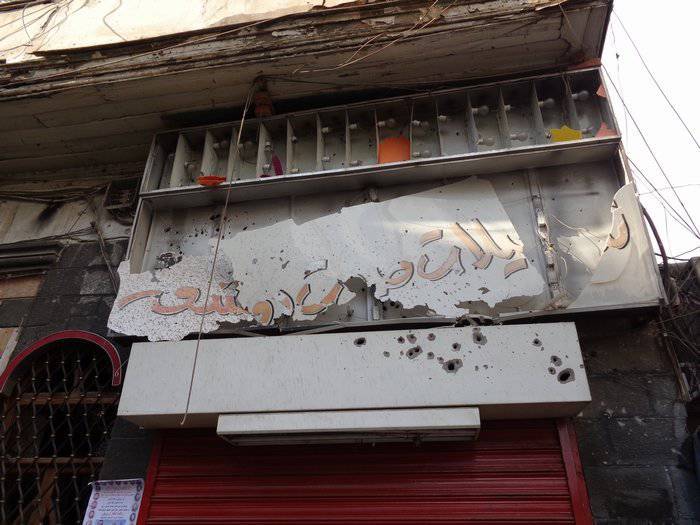 After the projectile breaks in the street, a funnel remains in the asphalt. 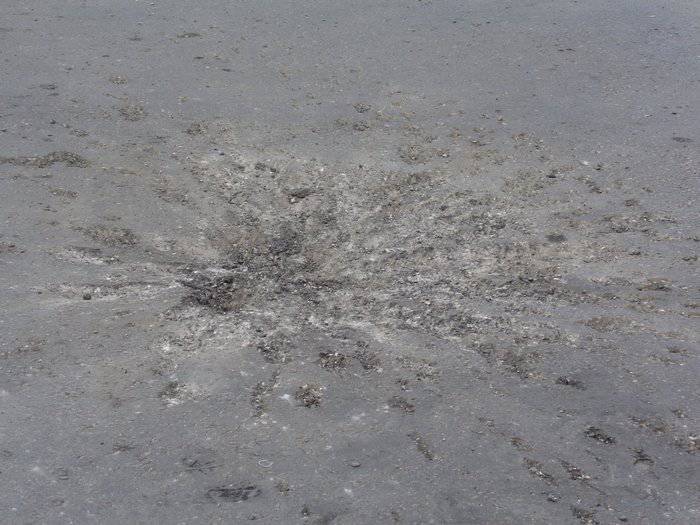 The booth of the telephone machine was thrown out of asphalt “with meat”. 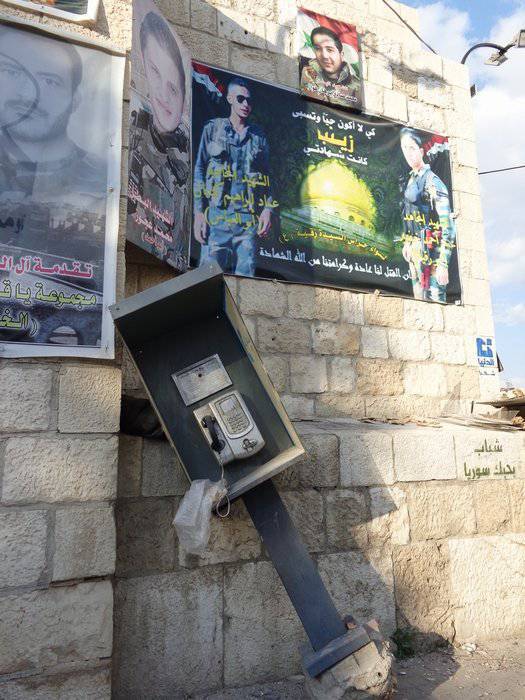 So that is behind each message of mortar shelling - blood, destruction, great damage to residents. And it was a relatively “happy” shelling - the case was limited to the wounded (although it cannot be guaranteed that all the victims will survive).

This is a type of terrorist attack that is not noticed by the world media. About a major explosion can still be reported. Although anyway, any attempt to condemn even the most monstrous terrorist attacks in Syria, in which dozens and hundreds of citizens are dying, any statement that says a word against the terrorists, “oppositionists,” runs into fierce opposition from Western countries.

And so mortar shells occur almost every day, taking the life of one, then two, then six Syrians. And making disabled several hundred people a month.

On the same day, April 4, a hotel in the metropolitan area of ​​Al-Bakhsa was shelled. There was a lot of material damage, no casualties. Because it was Friday, when there are few passers-by.

On Saturday, April 5, the Opera House and the Al-Feih Sports Complex came under fire. And in the area of ​​Al-Atfaya, the shell hit the roof of the house where the fuel tank was. Since many residents due to frequent power outages - another consequence of the pseudo-revolution - are forced to make these reserves, and there is no place to put, except on the roof. As a result, a fire broke out.

And in the province of Damascus in Jaraman 13 people were injured because of the "mortar rain" - at least 13 shells fell on the city. Three of the victims are medical workers, since one shell landed right in the hospital.

On the same day, in the city of Homs, gangsters fired a rocket at a market in the Al-Inshaat quarter. It has not been without the fallen. Six people died, 12 suffered. And because of the mortar shelling of Homs street Al-Khodr, one person was killed, 13 were injured.

In the province of Hama, the city of Mharda was attacked by militants of the “opposition”. One person is injured, there is destruction.

6 April in Damascus, two people died when the bandits again fired shells at the Opera House. Another five citizens were injured. Another target of the criminals was the Al-Abbassiin area - it is also often subjected to similar shelling, since it is located not far from the “terrorist nest” - Jobar. Three people suffered, suffered great damage. Damaged 9 vehicles.

Because of such indiscriminate shelling of residential areas, schools, hospitals, markets, shops, theaters, sports complexes, no Syrian does not know whether tomorrow will be alive and well or not. As a result of the activities of the “opposition” supported by the West, no one is sure whether, after a while, they will see their children, relatives and friends alive. It is not known where a person can find death - in the store, at work or in his own bed. Car owners, parking their cars, do not know whether they will be found safe and sound. And no one can be sure that the apartment in which he lives will not turn into a shapeless pile of ruins, and he will not join the ranks of numerous refugees.

Ctrl Enter
Noticed oshЫbku Highlight text and press. Ctrl + Enter
We are
Who blew up Turkey? The explosion in Istanbul and the "wave of terror" on Turkish soilSyria: Americans scare themselves, and Asma Asad buys chairs
Military Reviewin Yandex News
Military Reviewin Google News
18 comments
Information
Dear reader, to leave comments on the publication, you must sign in.