Appearance of Yulia Vladimirovna to the people of Donbass 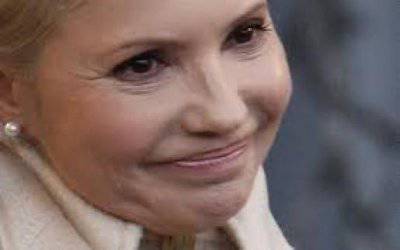 "In the near future, law enforcement agencies of Ukraine will peacefully bring order to Donetsk, because separatist rallies are not in the interests of the Donetsk people, and they don’t organize it ... Today my mom calls me every day and asks when there will be peace. In no case go to any protest. Just need to live and believe that Ukraine will soon become a powerful European state ... For peaceful Ukrainians, these actions are a natural disaster. We are now pushing the legal framework for all violent actions, and no standing with Bito or smashing windows will not go unpunished "- stated today Yulia Tymoshenko, sitting at the airport in Donetsk, reporters.


I even shed a little cry. That's who was supposed to be in place of the president Yanukovych, Mrs. Tymoshenko would definitely bring order to the Independence Square in Kiev and stop the pogrom that still continues in the capital.

But the cunning Yanukovych did not give her the opportunity to do it then, but now she has arrived in the South-East of the country in an attempt to restore order here. Everything wants to be done very peacefully.

And, obviously, the dollar, whose rate has risen by half a month, the prices for gasoline and products growing at a gallop pace, the expected increase in utility costs is exactly what will allow Ukraine to become the greatest European state.

Yulia Vladimirovna, by the way, gradually returns to shape. Although she bears herself out of the dungeon, still complete nonsense, her speech is already full of the same oil that, when she was in power, she cast entire concert halls into trance. On what basis she flew to Donetsk and plans to appear in Lugansk, in which role it is not entirely clear. On the all-Ukrainian leader, she pulls a little, until Mahatma Gandhi she is far away, but to the curses with which even at the funeral her ideal was showered - Margaret Thatcher - very, very close.

But irrepressible hyperactive apotheosis of ragulism - pan Oleg Lyashko already in Lugansk. At first, he was trying to buy someone a ticket to Russia on the street, and when a group of polite-minded Luhansk residents began to take him into the ring, Lyashko suddenly remembered that he had forgotten something in a hotel and evaporated sharply.

Then he was seen on the air channel 112, giving on Skype interviews. Walking through separatism, the Russian accent and a couple of dozen people who seize state institutions, although all the people are against it, Mr. Lyashko said: "This is the operation of the Russian special services. They called the police the police and had rubles in their pockets and military bearing. I demand decisive and adequate actions from Turchinov to destroy the terrorists."

On all screens of the country. Well, for now, Yulia Vladimirovna sang her usual song about Europe and Ukraine, powerful in it, Jose Manuel Barroso stabbed her in the back with a knife his interview for the German "Kölner Stadt-Anzeiger":

“Ukraine is not ready for membership in the EU, neither today nor in the near future. Just as the EU is not ready to accept such a country as Ukraine”, - said this villain and traitor of the whole Ukrainian people, who stood on the Maidan for the whole European Union.

The Minister of Defense of Germany also acted in a non-partnership way. Ursula von der Leyen: "Ukraine’s accession to NATO is not currently the subject of discussion. The country does not meet the basic requirements for joining NATO", - Frau von der Lyayen said in an interview with "Handelsblatt". And Frau Minister considers a probable armed conflict between the West and Russia to be a foolish invention.

So Panov Tymoshenko, Lyashko, Turchinov, Yatsenyuk and others, stomping wooden sabers on asphalt, Ukrainian politicians — you need to take your feet in your hands and negotiate with the people of the South-East. To accept the variant of amending the Constitution proposed by Russia and restructure the country into a federation.

Although it seems you are already late. People intend to do this without your impolite participation.