Umka platform and the future of Belarusian armored vehicles

April 8 2014
38
In the past few weeks, President of Belarus A. Lukashenko has made a number of statements regarding the development of the armed forces. According to the Belarusian leader, it is necessary to update and modernize the army, including with the help of new weapons and equipment. The army of the future should not be too big, but well equipped and very powerful. In this case, the armed forces will be able to effectively carry out the tasks assigned to them. In the near future, A. Lukashenko intends to “stir up” the 140 Repair Plant in Borisov, which is engaged in the restoration and modernization of various armored vehicles of the ground forces. The Belarusian president called on the company to start new projects: “Enough of painting and cleaning the sandpaper of the hull and changing something. We must move to a new stage. ” 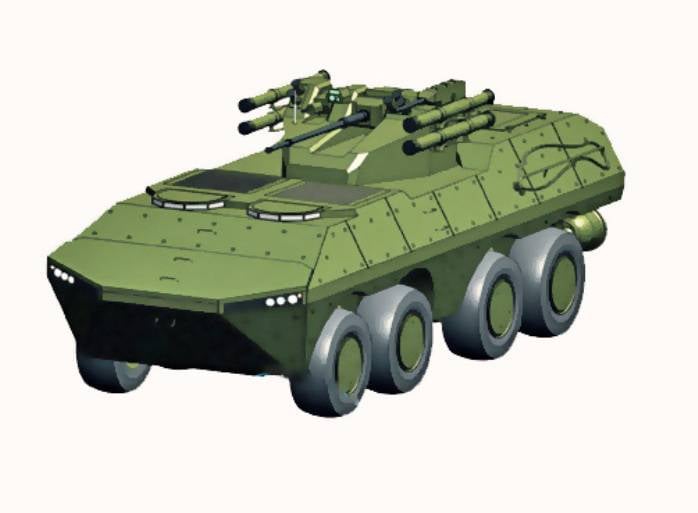 A. Lukashenko noted that some private enterprises of Belarus are already creating their own projects of modern armored vehicles. Large old plants, in turn, "rest on their laurels" and are in no hurry to engage in the development of new weapons and equipment. At the same time, the head of state noted that the new equipment should be created precisely by Belarusian enterprises.

It is likely that the relevant decisions and decrees will follow the statements of the President of Belarus. The armed forces of the Republic of Belarus really need to upgrade their fleet of armored vehicles. All armored vehicles operated by ground troops, were built before the collapse of the Soviet Union, which accordingly affects their capabilities and resources. The Belarusian industry made some attempts to create new types of armored vehicles to replace outdated vehicles, but none of these projects has yet reached mass production.

For example, several years ago, the Minsk Wheel Tractor Plant (MZKT) presented the project of the promising armored wheeled platform MZKT-590100 "Umka". Based on a single chassis, created with the latest trends in the field of armored vehicles, it was proposed to build cars of various types. According to reports, the project "Umka" stopped before the construction of prototypes. It is possible that one of the consequences of the recent statements of A. Lukashenko will be the resumption of work on the MZKT-590100 vehicle, as a result of which the Belarusian army will be able to update its fleet of armored vehicles. 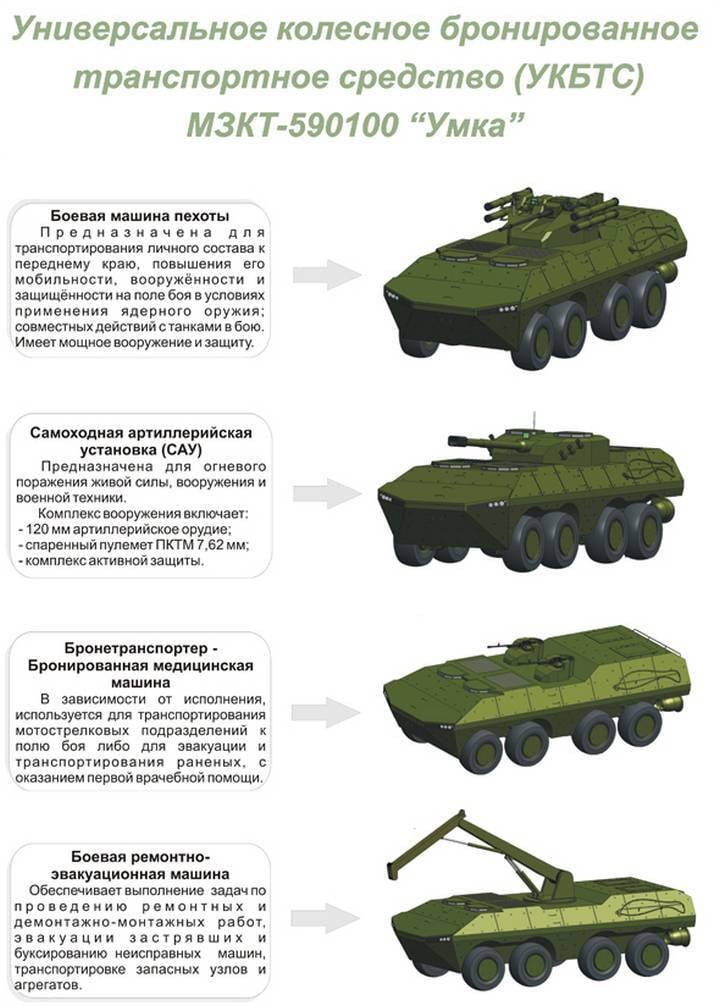 The Umka project started in 2008. The development of a family of promising wheeled armored vehicles was carried out by the MWTP on an initiative basis. It was proposed to develop a universal four-axle chassis, on the basis of which various types of equipment can be created: armored personnel carrier, ambulance, command and control vehicle, self-propelled artillery system or "wheeled tank". In the matter of creating various equipment for the armed forces, the Minsk Wheel Tractor Plant has a lot of experience, which was supposed to be used in the new project. At the same time, however, the developers of the MZKT-590100 project decided to abandon the tested and proven solutions. In the project “Umka” it was proposed to use new ideas and technical solutions.

Advanced technical solutions had to be applied in almost all elements of the new project. So, instead of a mechanical transmission, it was proposed to use an electric one with a separate electric motor on each wheel. The design of the armored hull had to use the newest materials, including composites. Finally, the composition of the on-board electronics should allow the crew to monitor the situation on the battlefield and keep in touch with other machines.

As follows from the available data, the MZKT-590100 combat vehicle was supposed to be built in accordance with the latest trends in the field of armored vehicles. In front of the 14-ton vehicle's armored hull, it was proposed to place a 490 hp diesel engine. and electric generator. With each of the eight wheels was proposed to connect a separate electric motor. For the rotation of the wheels was supposed to use an asynchronous motor or motor with permanent magnets. The specific type of electric motors should have been determined by a special study.

According to the calculations of the Belarusian designers, the Umka combat vehicle could have quite high characteristics. The maximum speed on the highway was estimated at 130 km / h, on a dirt road of satisfactory condition - 55 km / h. Power reserve was determined at the level of 1000 kilometers. In the stern of the hull, the prospective armored vehicle was supposed to have two electrically powered jet propulsion units. The maximum speed on the water was estimated at 12 km / h. 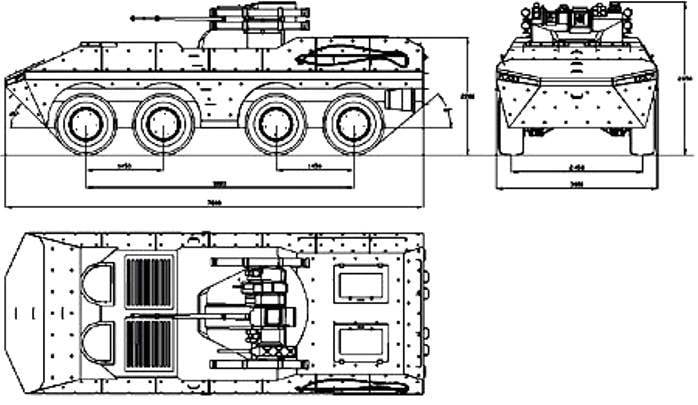 Information on the design of the armored hull and the level of protection provided is missing. Probably, the body of the armored vehicle MZKT-590100 was supposed to withstand the hit of small bullets weapons, including large-caliber. In addition, we can not exclude the possibility of using mounted modules additional booking.

In front of the hull of the car "Umka" was supposed to be located a diesel engine and an electric generator, as well as workplaces of a driver and commander. Behind them was a place to install the tower with the necessary weapons. Stern hull was taken under the troop compartment (in the version of an armored personnel carrier) or under the placement of the necessary payload. To land fighters or load cargo in the stern sheet, the car had to have a large door. In addition, roof hatches were provided.

To monitor the situation, the crew of a prospective armored vehicle had to have a complex of various optical-electronic and radar facilities. Electronic equipment and weapons in the first stages of the project were supposed to be purchased from foreign manufacturers.

Based on the Umka chassis, it was proposed to develop several machines for various purposes. Wheeled armored personnel carriers and infantry fighting vehicles were offered for motorized rifle units. From the published materials it follows that the armored personnel carrier on the basis of MZKT-590100 was supposed to carry two remote-controlled towers with machine-gun armament, which would increase the size of the troop compartment. BMP "Umka" was supposed to have at times greater firepower. It was proposed to install a combat module with an automatic cannon and a machine gun, as well as anti-tank guided missiles. In addition, the new chassis could become the basis for a promising self-propelled artillery. For this, it was proposed to equip it with a turret with a caliber gun to 120 mm and a twin machine gun.

Also offered two options for auxiliary equipment. The armored medical vehicle was supposed to be a modified version of the armored personnel carrier with the appropriate equipment. A promising armored repair and recovery vehicle, conceived by the creators, instead of the tower was supposed to carry a crane. Inside the hull it was proposed to place the equipment necessary for the repair.

It was expected that the project "Umka" would not only update the fleet of equipment of the armed forces, but also attract a number of Belarusian defense enterprises to active work. In 2010, the specialists of the Minsk Wheel Tractor Plant completed a study of the latest foreign armored vehicles of the same class as their promising development. In addition, the advantages and disadvantages of various systems that were proposed for use in the Umka project were identified. Having formed the overall look of a promising wheeled platform, MZKT held negotiations with several Belarusian enterprises that could take part in the project.

Enterprises found a common language, but no further work was carried out. Continuation of research and development work on an initiative basis was not possible, which is why MZKT sent a corresponding request to the State Military Industrial Committee (GVPK). Unfortunately, the proposal to create a family of wheeled armored vehicles on the basis of a single platform did not interest the Ministry of Defense and the GVPK. Due to the lack of funding and interest from the potential customer, the Minsk Wheel Tractor Plant was forced to shut down all the work on the MZKT-590100 Umka project.

The cessation of work on the Umka wheeled platform project, among other things, led to the fact that the Belarusian military still has to use Soviet-made equipment. The defense industry of Belarus is able to carry out timely repairs and some types of modernization of the existing equipment, but its resource is not unlimited. Every year the need for new armored vehicles is felt more and more, and the absence of any projects in this area only complicates the situation. The consequences of the recent statements of A. Lukashenko will be shown by time. It is quite possible that in the foreseeable future Belarusian enterprises will start developing new equipment for the army. There is a certain probability that new types of equipment will be created taking into account any ideas embodied in the UMKA-590100 project.