Perishable cannon fodder and its use in "controlled chaos" 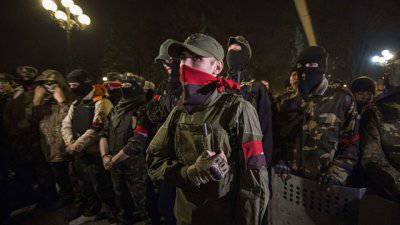 Cannon fodder is convenient for solving many pressing problems. But its storage in the intervals between the decisions requires considerable expenses. In addition, people accustomed to kill, sometimes remain dangerous to others, even if they fought in their interests. Therefore, very many military leaders tried to get rid of the troops by passing the need. Sometimes they simply did not pay the promise: for example, the novel by Gustave Ashil-Kleofasovich Flaubert “Salambo” was all built around the mutiny of mercenaries - they won another war for Carthage and did not receive the promised payment. Sometimes people accustomed to fight were rafted far and more dangerous on some expeditions: from relatively recent examples, let us recall how Polish troops commanded by General Lucian Mechislav Rafal Zheligovsky, formally declaring that he no longer obeyed the authorities of the newly created republic, captured 1920.10.10 Vilnius and the Vilna region - before 1922.02.20 Zeligovsky was listed as the head of Middle Lithuania, and then passed it to Poland; only when it collapsed under the German blow, the USSR 1939.09.17 occupied the lands occupied by Poland in 1920 — the east and south of the Vilna province became part of the Byelorussian SSR, and the lands with the predominance of Lithuanians of the USSR 1939.10.10 transferred to Lithuania temporarily independent.

Of course, if the country has seriously suffered during the hostilities, the majority of the former military can be attached to solving the most difficult tasks of reconstruction, and by the end of this work they already forget the past experience of fighting. Thus, in the USSR, at the end of the Civil War, the armed forces were reduced from 5 to 0.5 million - but the restless with thirst for blood (like the heroine of Alexey Nikolayevich Tolstoy’s "Viper") was negligible. And after the Great Patriotic War, nothing similar to the Vietnamese syndrome in the United States of America arose. True, the Afghan syndrome still arose - but it was incomparably weaker than Vietnamese: the collapse of the USSR and the planned economy forced to solve the problems of survival - and more often than not by force, although some skills instilled in the war (from the ability to keep the word until ready to resist evil by violence) were useful.

But, of course, any lucky opportunities to get rid of people who are already accustomed to the taste of blood, do not happen every day. Therefore, sometimes you have to get rid of them in a purely surgical way.

In particular, a prominent figure in the February state coup in Ukraine, Alexander Ivanovich Muzychko, is precisely on this path. And his nominal leader for the Right Sector, Dmitry Anatolyevich Yarosh, realized in time that he was about the same fate, and chose not to wait for the inevitable, but to declare The Right Sector only as a party (with the transfer of the most notable militants from the Kiev Dnepr Hotel on a country base).

In any case, cleaning up bandits and murderers is a forced, necessary and useful thing for society as a whole. I have nothing against eliminating even anyone who threw police officers with bottles of gasoline and robbed Kiev apartments. But, alas, our belolentochnye younger brothers in mind joyfully proclaimed: now the Ukrainian revolution will become white and fluffy. But for all the importance of cannon fodder, it is incomparably more important than those who determine: where to send this meat and whom to destroy with its help. And on this part in Ukraine nothing has changed and will not change in any foreseeable future. Ukraine, as it was a way to capture the Russian lands and the Russian people, will remain so. And from the fact that now the criminals will be engaged not in camouflage, but in shirts, embroidered shirts or white-collar clerks, for the Russians themselves - neither in the Russian Federation nor in Ukraine (where, despite all the efforts of Ukrainizers, they still make up in their native language - 5 / 6 population) absolutely nothing will change.

Therefore, it is too early to rejoice at the murder of Muzychko and the departure of other militants Yarosh from the center of Kiev. We will rejoice when Turchinov and Obama, Yatsenyuk and Kerri, Klitschko and Nuland appear on the dock next to Yarosh ...